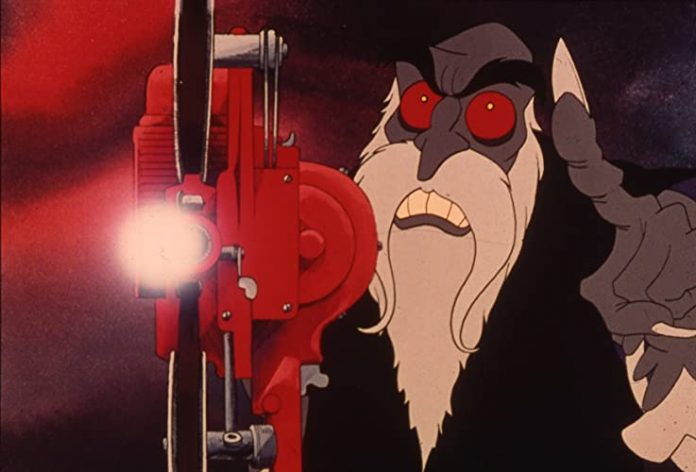 In 1977, cult animator Ralph Bakshi released a strange little animated fantasy film called Wizards. While not the strangest film that Bakshi ever made, and certainly not the strangest animated film of the 70s (which was something of a golden age for trippy animation), it did represent his first step into the world of fantasy and science fiction.

Bakshi would follow it up with the first screen adaptation of Lord of the Rings just a year later. Next was 1983’s Fire & Ice (co-developed with Frank Frazetta), and the cyberpunk animated television series Spicy City for HBO (the first animated series with a TV-MA rating, beating out South Park). But it’s more than just a turning point in the career of a noted animator. Wizards is worth discussing on its own merits because it presents a somewhat unconventional spin on fantasy and actually has something to say.

The actual plot isn’t complicated. An elf, a fairy, and a wizard named Avatar have to defeat Avatar’s brother, the evil wizard Blackwolf, before he overruns the world with his mutant armies. Calling it a standard fantasy narrative would be underselling it, but there are a few things that make Wizards stand out. Like that fact that its setting is a post-nuclear earth that magical creatures have partially reclaimed now that human civilization isn’t a going concern anymore. In fact, it’s this last point that allows for a little extra weirdness on the film’s part.

As much as he wants to conquer the world, or at least the parts of it that the fairies and elves have rejuvenated, Blackwolf has a problem. While his mutants resent the magical beings, they aren’t particularly enthusiastic about waging war on them, and frequently lose battles because they can’t stay interested long enough to fight effectively. If they don’t just run at the first sign of danger. The only advantage they have is that the magical beings have an anti-technology taboo and don’t use anything more advanced than swords or bows.

Blackwolf finds a solution to his troops lack of motivation in the form of Nazi propaganda. As in actual Nazi propaganda films. By having his mutants embrace Nazi tenants like racial supremacy and aggressive militarism Blackwolf creates the military machine he wants. Doubly so when he gives his troops Wehrmacht equipment like panzers and MP40 SMGs. Not to mention snazzy German uniforms. He even projects the propaganda films into the skies above enemy armies to disorient and terrorize them. The mutants steamroll the elves and fairies.

Obviously, Wizards is very anti-propaganda. The Nazi propaganda turns the mutants into true monsters, while the fairy and elf anti-technology propaganda leaves them helpless when the mutants step up their game. There’s also a secondary point that technology is only as bad as what people use it for. Both points are made with all the subtlety of a kick in the nads, which is not, it must be said, unusual for Ralph Bakshi. However, Bakshi generally uses satire to convey his points, so him being this upfront about what he thought is a change.

Not All Ideas Are Worth Bringing into the Present

However, there is a subtler point the film has to make. Subtle for this film, anyway. While Bakshi chose Nazi propaganda because it’s still some of the vilest and, more importantly, recognizable, it’s worth noting that Blackwolf retrieved these ideas from the past. Even worse, it soon enough becomes clear that Blackwolf fancies himself the second coming of Adolf Hitler, with all that that entails. This includes a eugenics program that would specifically necessitate the extermination of his mutants. As seen when he demands the death of his newborn son after learning that the child is a mutant.

It’s not just propaganda anymore, Blackwolf has brought one of history’s darkest chapters into his world and given it new life. As a result, everyone’s worse off. Sometimes the past should stay buried, or more specifically, some ideologies should stay dead. We have enough problems in the present without plumbing the depths of history for more. Nazism being a sterling example. In fact, given Wizards’ setting, it’s not reaching to say that ideas like those found in Nazism helped push the world into a nuclear Götterdämmerung.

It’s also worth pointing out that Blackwolf seems unaware that the Nazis lost in the past, which potentially makes him a victim of his own propaganda. Of course, given his personality, it’s doubtful Blackwolf would have cared if had he known. After all, he’s Hitler reborn. As long as the misery of the past serves him, Blackwolf doesn’t care how much of it he has to dig up.

The closing narration agrees, declaring “Hitler was dead again” after Avatar shoots Blackwolf dead with (presumably) one of his own Lugers. The past is back in the past and the future is open again. It’s a fitting sentiment for a post-apocalyptic film, though it neglects the necessity of learning from history. Still, that sentiment has only gotten more relevant as far right and explicitly Nazi political factions increase in power.

Wizards has remained a cult favorite, especially among older animation fans and Bakshi aficionados, for decades. Given its age, rough animation, and uneven pacing, it’s unlikely it will ever find a wider audience. However, it’s a still a good example of more adult-oriented animation trying to be thoughtful. It doesn’t quite hit its mark, but it does illustrate what propaganda can do to a society as well as the need to keep rotten ideologies where they belong, in the dustbin of history.