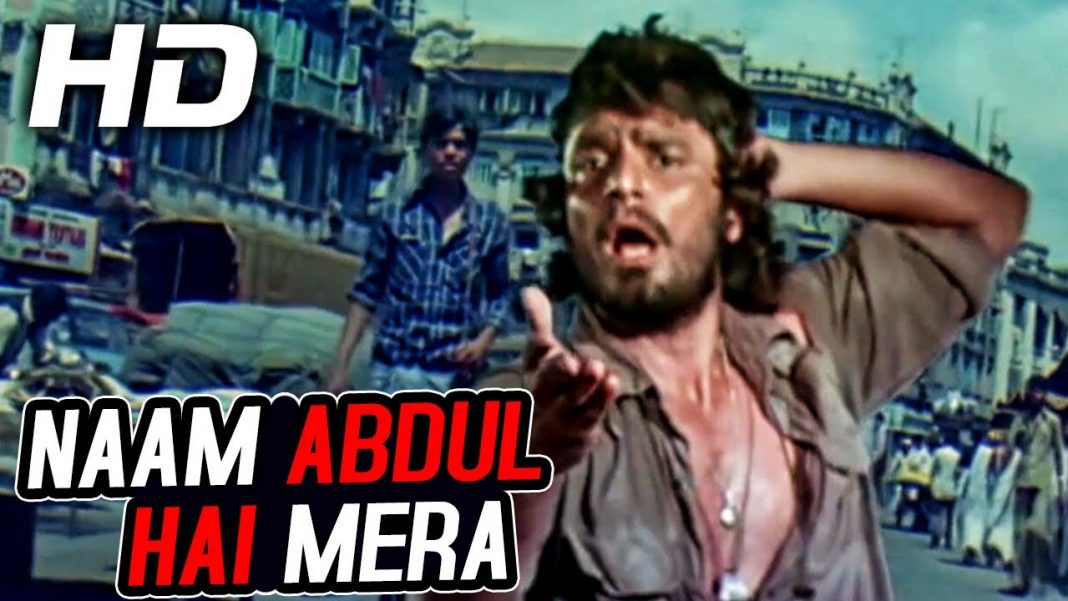 The fifth post for today is the analysis of the song, Naam Abdul hai mera, from the Bollywood movie Shaan (1980). The song has been analyzed on the basis of its context and visualization. When Mom took my sister and me to watch this movie and this song began, we initially thought that the character of Abdul was being portrayed by Actor Jeetendra, of yore. Then, we read the movie magazines, which had information about Mazhar Khan, During the video of this song, Mazhar Khan looks like Jumping Jack (as Jeetendra was called in those days), from certain angles.

Ravi (Shashi Kapoor) and Vijay (Amitabh Bachchan) are cheated by Renu (Bindiya Goswami) and her uncle (Johnny Walker) and land inside the lockup. Their elder brother, Deputy Commissioner of Police, Shiv (Sunil Dutt) gets them released and pulls them up for their wayward ways. But for the young men, it is a regular thing and the lectures do not affect them. To find the girl, who had cheated them, they decide to contact a poor street-smart differently-abled Abdul. In the next shot, Abdul (Mazhar Khan) is seen singing this song,

The lyrics of the song, Naam Abdul hai mera, were penned by Anand Bakshi and were set to tune by Rahul Dev Burman (R D Burman).

The song goes, “While people move about, I keep a watch over them. My name is Abdul. I keep the information about everyone.”

The video opens with Mazhar Khan shouting “Ya Ali” with a lot of enthusiasm. The background shows Haji Ali Dargah in South Mumbai. He is moving about on a wooden board with wheels. Differently-abled beggars often use this kinda board to move about in India.

Mazhar Khan catches hold of a railing on a bike and moves about on the roads like a king. He smiles at the bikers and lets go of the bike to move in a different direction. The next shot is a South Mumbai location that I remember because the Times of India office is located there. 🙂

Mazhar Khan keeps swaying from side to side, in tune with the music, in a limited way. He also plays the harmonica and salutes every person he knows. Then, he begins the song with a cryptic message.

Some of these are studio shots clearly since it would have been too dangerous for an actor to move around on busy roads with his legs tied to the board. If I remember right, this debutante was called the surprise packet of the movie when it was released.

Next, he holds on to the back rail of a truck to pass through that particular road. He wheels though the traffic in between the vehicles. His observant eyes catch several illegal transactions. Soon, the song peters out and the video ends as he continues to move.

Mohammad Rafi sang this song for the then newcomer, Mazhar Khan. Other actors are also seen in the video.

I love this Mohammad Rafi croon, which the legendary singer sang for the newcomer, to give the latter the best debut. My favorite singer was that way. The song also appeals to me because of the secretiveness and mystery in the air and spying by the character called Abdul. You know I love mysteries and thrillers! 😉 The song and the artists are ammmazing (intentional spelling). The video is watchable for the same.