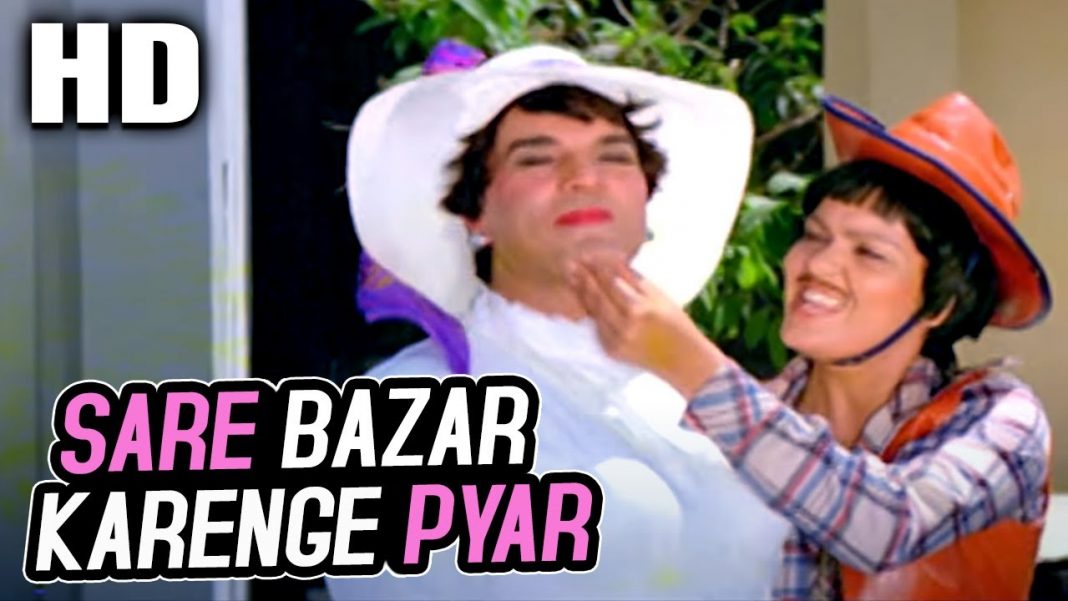 This is a typical lost-and-found type of Bollywood movie.

A rich man (Pradeep Kumar) has a small divine chariot with Lord Krishna and Arjuna, made up of gold studded with diamonds. The criminal Black Cobra (Amjad Khan) wants that for himself. He kills the rich man and in the confusion, his wife Radha (Nirupa Roy) gets separated from her sons Ajit and Munna. Ajit watches his father being killed by Black Cobra and that gives him a big shock. When he cannot remember his past, he is adopted by a Muslim woman and named Badshah. Munna is adopted by a petty thief (Mukri).

Years later both the kids have grown up into young men. Badshah (Dharmendra) fights for the downtrodden. Munna (Rishi Kapoor) has become a petty thief like his adopted father. One day, Munna sets his eyes on the precious necklace worn by a lady staying at a hotel. But, he is not the only one besotted by the necklace. Another petty thief, this time a female (Tina Munim) with a monkey doing all the work, is attracted to it and steals it. He tricks her into losing the necklace. When she comes to know about his tricking her, she threatens revenge. But, Munna has already fallen in love with her.

Munna reaches his biological mother Radha due to a small misunderstanding. I am not elaborating the scene because it is worth watching first hand. I will just say that Black Cobra tries to plant someone as Munna (Ravi Kumar) in Radha’s home and the real Munna lands there, instead. A missing person’s newspaper ad brings Badshah also to his mother. The unknown female thief (Tina Munim) also lands there as Munna’s wife. Radha accepts her as her DIL.

After showing some attitude, the female thief accepts the fact that she is in love with Munna. Munna tells her about his mission and they make Radha give a box full of laddoos made of bhang to Badshah. Badshah in turn meets Jameela to celebrate her birthday with those laddoos. Intoxicated, they perform this song out in the open.

The lyrics of Sar-e-bazaar karenge pyar were written by Rajinder Kishan and the music was composed by Kalyanji-Anandji.

The song goes this way, “We will woo each other in front of everybody.”

Cinematography is by Kishore Rege.

The video opens with Dharmendra and Zeenat Aman playing on a seesaw on a raised platform, which is moving, right in the middle of the road. This results in a traffic jam. The pair goes into the opposite gender washrooms.

Dharmendra gets into the dress of a woman and Zeenat Aman into one of a man. The Gurkha, who is the security guard there, is shocked. The lead pair links their arms together and leaves the place. The Gurkha loses his consciousness.

Zeenat Aman makes a good man! Dharmendra is hilarious in a woman’s dress. 🙂 Of course, the song is expected to be funny. After some dancing, again right in the middle of the road, they go to their respective gender stores and change.

Then, they are seen playing under an artificial fountain, with people surrounding them and enjoying the scene. They come out of the water and continue to sing and perform, still drenched. People surround them and listen to their lectures (song) on how to love their beloved.

The song peters out and the video ends as the lead pair hugs and leaves the place.

The playback of Sar-e-bazaar karenge pyar was sung by Kishore Kumar and Asha Bhonsle while the onscreen performances were by Dharmendra and Zeenat Aman.

This song is a testimony to what happens where one is intoxicated with drugs. The song and the artists are good. The video is watchable for the same.