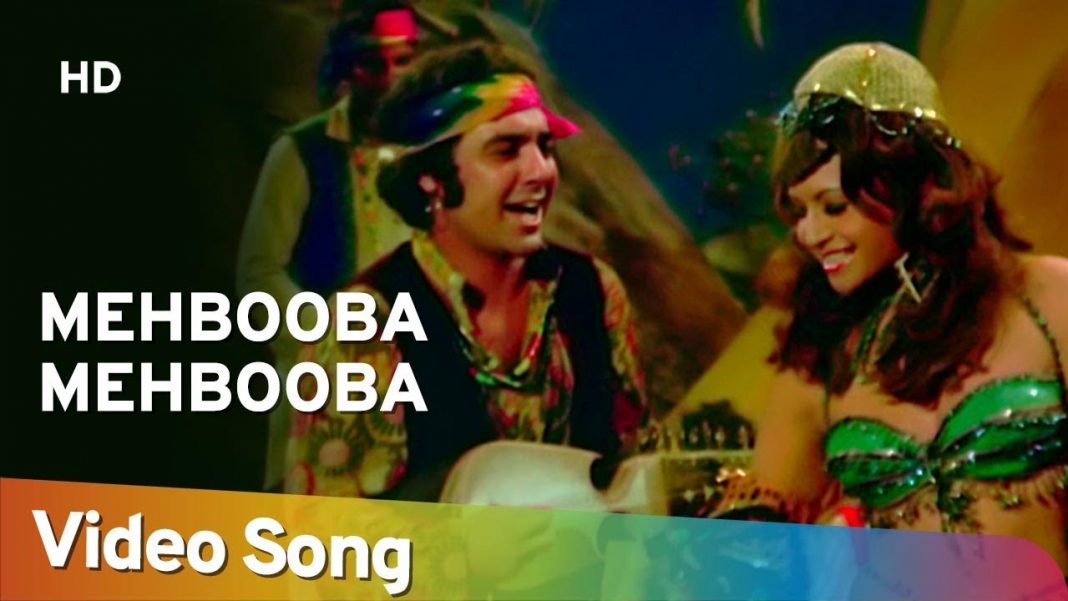 You would be wondering, why I chose Mehbooba Mehbooba for today. There are at least 2 reasons. One is to continue the story I began yesterday with this song. There is a dialogue in this movie where Amjad Khan aka Gabbar Singh reprimands his gang for not bringing food supplies from the village Ramgarh, “50-50 kos door gaon mein jab bachcha rota hai. Uski Maa kehti hai – soja soja nahin toh Gabbar Singh aa jayega. Aur tumne hamara naam poora mitti mein milayi diye.” An older kid in our story tells her younger sibling, “Masti mat karna. Nahin toh Corona aa jayega!” 🙂

The second is that several years ago there would be a band called Mahesh Kumar and Party. Mahesh Kumar would sing a parody of this song during some of his events, “Laddoo la ladoo la mirchise muh jalta hai.” The situation was during someone’s wedding one of the dishes on the menu had too many chillies and the lady appears to have had a lot of it. To counteract the hot burning taste in her mouth, she asks for laddoos, this way! 😀

Ramgarh is a small village and the retired policeman Thakur Baldev Singh (Sanjeev Kumar) lives there. The Thakur is looking for the pair of petty thieves, Veeru (Dharmendra) and Jai (Amitabh Bachchan) – criminals with hearts of gold.

Soon, the Thakur meets the 2 thieves and hires them to help him capture Gabbar Singh (Amjad Khan), a dacoit. They are told to reach Ramgarh. At Ramgarh, Veeru falls in love with the village belle Basanti (Hema Malini). Dacoit Gabbar Singh’s terror reigns in the place. He, soon, attacks the village during Holi.

During the attack, seeing Thakur not participating in the fight; Veeru and Jai question his behavior. That is the time, Thakur reveals some flashback. Thakur had arrested Gabbar Singh. But, the dacoit escapes from prison and kills most of Thakur’s family. When Thakur goes to confront the dacoit, the heartless man severs the policeman’s arms. Coming back to the present, Thakur offers the petty thieves more money to capture Gabbar Singh. Having understood the Thakur’s predicament, Jai, the better of the 2 thieves, returns the extra money.

Thakur receives the message that a group of gypsies had put up camp nearby and Gabbar Singh was expected to be there that night for some entertainment. The gypsies were also the suppliers of arms to the dacoit. Thakur commands the pair of thieves to begin their work immediately. Mehbooba Mehbooba is present in the next shot.

The music for Mehbooba Mehbooba was composed by late R D Burman and the lyrics were written by late Anand Bakshi.

This is a typical Bollywood item song.

The video opens with Sanjeev Kumar commanding Dharmendra and Amitabh Bachchan to start work. Music begins in the background. The scene changes to the gypsy camp with Amjad Khan looking lustily at the dancing Helen. Jalal Agha begins to sing this song.

Somehow, I did not find R D Burman’s voice suitable for Jalal Agha. It sounded a little too hoarse, with due respects to the music composer. I am a fan of Panchamda. But, watching the song after several years of release and as an older person, I find this strange.

In the meantime, Dharmendra and Amitabh Bachchan are hiding behind some rocks, ready to do what they had come for. As the song rises to a crescendo, the 2 heroes blast the arms and ammunition with dynamite. The video also ends as the blast occurs.

Mehbooba Mehbooba is sung by R D Burman for Jalal Agha. Helen is dancing on the tune of it. Amjad Khan and others are enjoying the dance. Dharmendra and Amitabh Bachchan are up to some mischief hiding from Amjad Khan and his gang.

A typical R D Burman-style item song, with a gypsy tune, sung by himself; it became very popular in those days and still is. The song and the artists are good. The video is watchable for the same.