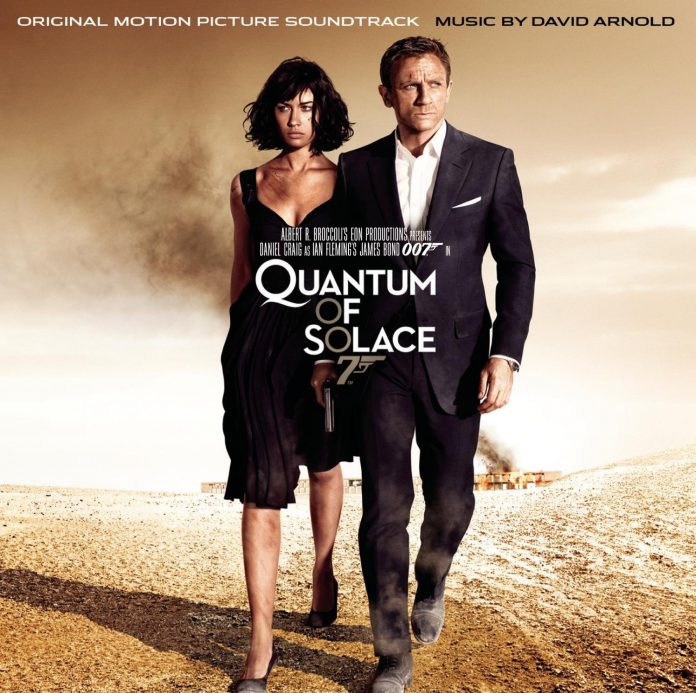 For the sequel to Daniel Craig’s James Bond debut, David Arnold brings another great soundtrack for “Quantum of Solace”.

With the upcoming release of the fifth and final installment of Daniel Craig’s Bond, we thought it’d be nice to look back at each of the previous installments in the Bond franchise. While not all of the movies are amazing, they all still boast impressive soundtracks. Chris Cornell’s hit single, “You Know My Name”, from “Casino Royale” set the bar pretty high for its predecessors. But Jack White and Alicia Keys collaboration on “Another Way to Die”, might surpass it. That being said, David Arnold brings another original score that doesn’t disappoint.

But before we get into the soundtrack itself, first here’s a brief synopsis of “Quantum of Solace”, for those who either haven’t seen it, or just need a quick refresher.

“Quantum of Solace” follows the events of “Casino Royale”. With his lover Vesper Lynd dead, Bond (Daniel Craig) makes his next mission personal by hunting down the organization that had been blackmailing her. His search leads him to the ruthless businessman, Dominic Greene (Mathieu Amalric), a key member of the organization. With Greene plotting to gain complete control over a vital natural resource, Bond must wade through a minefield of threats and deception to bring him down.

David Arnold’s soundtrack for “Quantum of Solace” starts with the track “Time to Get Out”, which appropriately matches the high intensity car chase that opens the film. Here we hear a lot of similarities to the “Casino Royale” score. Rapid percussion, blaring brass sections, and furious strings. In the wake of the action opener, we get an even longer chase sequence and Arnold’s “The Palio”. Here all of the jerky action and blaring horns can become a bit much, but overall the track still does a great job of matching the scene in tone.

The opening credits to “Quantum of Solace” brings a heavier edge to this Bond installment. Both Jack White and Alicia Keys bring a track that’s exactly as good as you’d expect a collaboration between the two of them would be. The main riff feels very Bond-esque, especially with the inclusion of the familiar Bond musical motif. Unlike Chris Cornell’s “You Know My Name”, however, Arnold didn’t include motifs of “Another Way to Die” Could be David Arnold’s way of casting his own vote for which he liked better.

One thing that’s easy to appreciate about Arnold’s Bond scores is how he pays tribute to the composers who came before him. In “Casino Royale”, he included themes composed for the original “Casino Royale”. Likewise, for “Quantum of Solace”, Arnold includes the “James Bond Theme” originally composed for the “Dr. No” soundtrack. This trend of his lends his soundtracks a level of cohesion that you don’t always hear. It’s a nice touch, to say the least.

Overall, David Arnold’s follow up soundtrack to “Quantum of Solace” pretty much lines up with my opinion of the film as a whole. If I’m being honest, I think it’s a little less inspired than “Casino Royale”, and doesn’t really offer much in terms of surprise. That being said, it’s still not unprofessional or bad by any means. I think the right phrase for it would probably be something like, ‘disappointingly proficient’. There’s probably a more concise way of saying that, but sometimes it takes me awhile to arrive at my point. Don’t judge me.

That about does it for today. I hope you enjoyed our discussion of David Arnold’s soundtrack to “Quantum of Solace”. We’ll be back next week with another soundtrack to explore.

Exploring Soundtracks: Shaun of the Dead