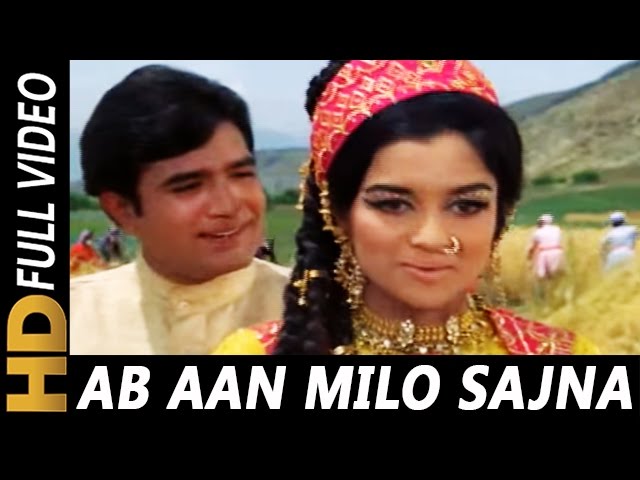 On the other hand, Deepali meets Ajit (Rajesh Khanna) in the village, who is kindness personified. She appears to be impressed by Ajit and so is he. After a few meetings, she realizes that he is the epitome of virtue, as well. She also tells him that she is Varsha and not Deepali and she is not engaged to Anil. Soon, she convinces him to accept her love. In the meantime, Anil is pulling a helpless Varsha into a quagmire of deception and nobody can help her out of it. Ajit tells her that they should meet the situation head-on. He also tells her to just wait and watch. The next day is harvest time. But, he insists that she should not visit the fields on that day. However, she ignores his insistence and visits the place. She also begins this song hidden from him.

The music of this song, Ab aan milo Sajna, was composed by Lakshmikant-Pyarelel and the lyrics were penned by Anand Bakshi.

The girl yearns for the companionship of her beloved and requests him to shorten the distance between them.

The video opens with Rajesh Khanna moving away from a group of farmers and a female voice beginning to sing this song. Initially, he does not know who is singing and thinks if it is his business at all. Then, he realizes that it is Asha Parekh.

Rajesh Khanna turns around and joins in the song. Some girls are dancing. Farmers are also dancing as they continue cutting crops with sickles. Junior Mahmood is playing the dhol. Rajesh Khanna goes around looking for Asha Parekh.

Suddenly, he turns and discerns her while she is also searching for him. He hides within the field and continues to sing. Then, he shocks her by appearing behind her and shouting an ‘O’. She turns happily and runs toward some girls. He joins some men.

Now, there are 2 distinct gender groups, who dance in their places. The song rises to a crescendo and the video ends as all the dancers, including the lead pair, continue to dance and form circles within the fields. The camera zooms out to some distance.

Lata Mangeshkar and Mohammad Rafi sing for Asha Parekh and Rajesh Khanna. Junior Mahmood plays the dhol as several other men and girls dance throughout the song.

This song definitely has some influence of the Punjabi Bhangra and Tappa with a touch of Kashmir, on it. I am just crazy about it. 🙂 The song and the artists are fantastic. The video is watchable for the same.

Instructor Job in West Point, New York – Department of the...