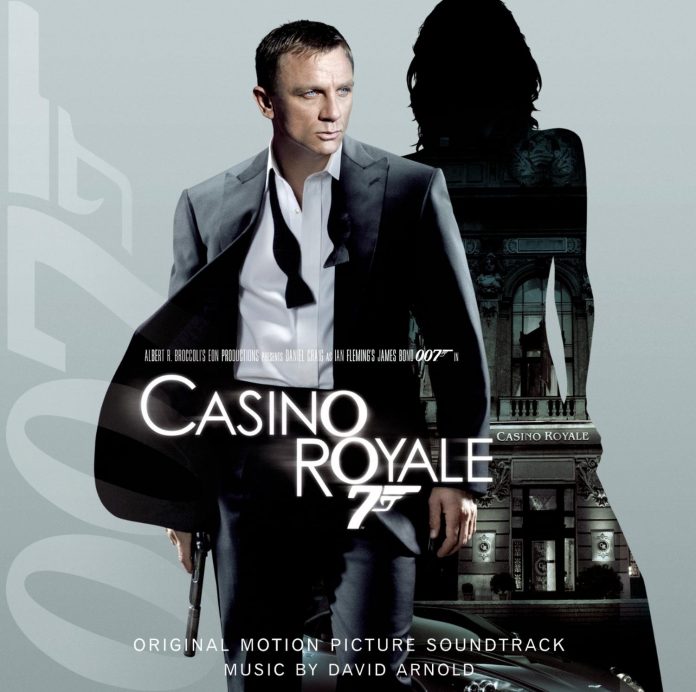 “Casino Royale” revitalized the Bond franchise for a new generation, with a killer soundtrack that set the bar high for each successive film since.

With the upcoming release of the fifth and final chapter of Daniel Craig’s Bond, we thought it’d be nice to look back at each of the previous installments in the Bond franchise. While not all of the movies are amazing (looking at you, Quantum), they all still boast impressive soundtracks. But it all started with the first, “Casino Royale”, whose opening credits track, “You Know My Name” by Chris Cornell set the tone for the Bond singles to come. David Arnold’s original soundtrack for the rest of the film, however, does not disappoint.

But before we get into the soundtrack to “Casino Royale”, first here’s a brief synopsis, for those who either haven’t seen the film, or just need a quick refresher.

After receiving his license to kill and double-0 status, British Secret Service agent James Bond (Daniel Craig) finds a link to the terrorist-funding Le Chiffre (Mads Mikkelson). When MI6 learns that Le Chiffre is planning to raise money at a high stakes poker game in Monetenegro, they send in Bond, their best poker player in the service. But as the stakes are raised, how much is Bond willing to gamble when there are lives on the line?

“Casino Royale” opens with a classic Bond scene before cutting to the opening credits, which feature the James Bond theme incorporated into Chris Cornell’s “You Know My Name”. While the track didn’t make it onto David Arnold’s Original Soundtrack, it’s easily the most recognizable one from the film. And it’s success began the long tradition of single releases for Bond films, perhaps reaching and passing its peak with Adele’s “Skyfall”.

As far as David Arnold’s score goes, it starts off with a bang in “African Rundown”. The nearly seven-minute track captures the energy and excitement of Bond’s chase through Madagascar that ends with a fiery explosion and the destruction of an embassy (of course). Also, the track (along with many others) contains an instrumental interlude of the film’s theme, “You Know My Name”.

Arnold’s soundtrack isn’t all action and interludes, though. Both “Solange” and “Trip Aces” pair well with the picturesque Bahamas, mysterious brush with the bad guy, and the courting of his wife. All staples of a classic Bond flick, and all handled well by Arnold.

The longest track from David Arnold’s “Casino Royale” soundtrack is the heart-pounding “Miami International”. At over twelve-minutes long, this epic track keeps up the tension, knowing when to blare the horns during more suspenseful action sequences, and when to lay off a bit to build back up again.

Overall, David Arnold’s original soundtrack to “Casino Royale” brings everything you’d expect, desire, and more in a Bond film. There’s even some nice humor thrown in there with “Dinner Jackets”, and disorienting paranoia in “Dirty Martini”. And the tracks “Vesper”, “City of Lovers”, and “Death of Vesper” help to balance out all of the heavy action compositions with softer, love themes and minimalist piano.

But above all, the soundtrack to “Casino Royale” wouldn’t be what it is without the theme contributed by Chris Cornell in “You Know My Name”. Interludes from that song can be found in nearly half of the tracks on the album. It makes for a very cohesive soundtrack, but due credit should be given to David Arnold for incorporating it so flawlessly into the score.

That about does it for today. I hope you enjoyed our discussion of the soundtrack to “Casino Royale”. We’ll be back next week with another soundtrack to explore.