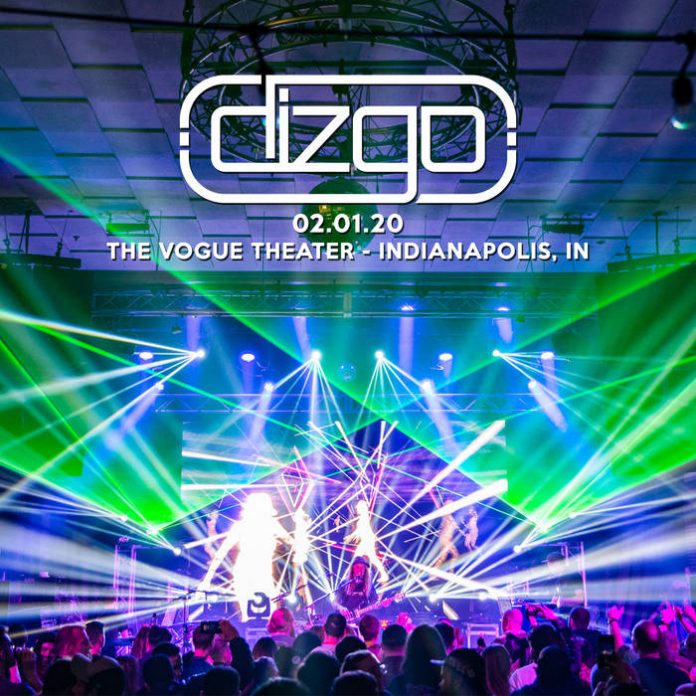 This week, we’re going to be looking at the live album recorded “02/01/2020 – The Vogue Theatre” by the Bloomington-based “jamtronica” band, Dizgo. If you happened to be there at The Vogue Theatre during Dizgo’s performance, there’s a chance you may be able to hear yourself cheering in the background as the band takes the stage.

But before we get into Dizgo’s live performance at The Vogue last month, first here’s a little more information about Dizgo themselves, for anyone who’s either a little curious, or has never heard of this Bloomington-based electric jam band.

Dizgo is a three piece jam band from Bloomington, Indiana that initially formed in 2016. Since then, they’ve been building a strong following in the festival scene. Their first release was a live album recorded during their performance at Bloomington’s The Bluebird, a venue that has hosted other successful jam bands like The Main Squeeze. In 2017, Dizgo released their debut EP, “Constant State of Motion”, followed up by another live album at The Mousetrap in Indianapolis. Last year, Dizgo released their debut full length album, “Deeper”.

On their Facebook page, Dizgo takes the liberty of describing themselves for their fans.

“Dizgo redefines the live experience by blending jamtronica with funk, deep-groove soul, and hip-hop, taking the audience on a musical journey that includes intricate compositions and extended improvisation. The result is something both danceable and introspective: soulful vocals, interweaving analog synths, and addictive beats all which join forces under the banner of Dizgo”.

The live show at The Vogue Theatre kicks off with the track “Thoughts From Another Mind”. The seven minute track is one of the shortest from the entire performance, so before getting invested in this album, know what kind of commitment you’re singing up for. But chances are if you’re into Dizgo, you probably don’t mind the long, jammy songs. But if for some reason you do mind them, then this album probably isn’t the one for you.

One of the highlights from Dizgo’s performance at The Vogue Theatre is a thirteen minute version of their song, “On the Groove”. Appropriately named for its funky rhythm and strong groove that never lets up, “On the Groove” has all the elements of a strong dance track. This version is a little longer and a little more spacey than the one from their album, “Deeper”.

Another highlight of the live album is the medley arrangement that includes the tracks, “Through the Air”, “Never On Time”, and a cover of Green Day’s “Brain Stew”. This epic, sixteen minute track features solos galore. Be prepared for a lot of long-winded jam sessions, loosely tied together with some verses thrown here and there. The main concern Dizgo takes into consideration here is the groove, as they should. And it’s actually a little surprising that their cover of “Brain Stew” manages to be one of their most energetic and effective tracks.

Overall, Dizgo’s live performance is probably better experienced live than through a pair of headphones. But the energy from their concert at The Vogue Theatre definitely comes through on every track. Still, it’s not quite the same. Be sure to give it a listen if you’re a fan of electronica or jam bands. If not, then “02/01/20 – The Vogue Theatre” is fine to pass up on. I’m not a huge fan of it. But I also don’t hate it. It just sits somewhere in the middle for me.

If you enjoyed this review, you can listen to more of Dizgo’s new album, “Deeper” by visiting their Bandcamp page. To find out more about the band, you can find them on Facebook.

MLS returns to action after poignant moment of silence

The Weekend Classic to Play the Hoosier Dome