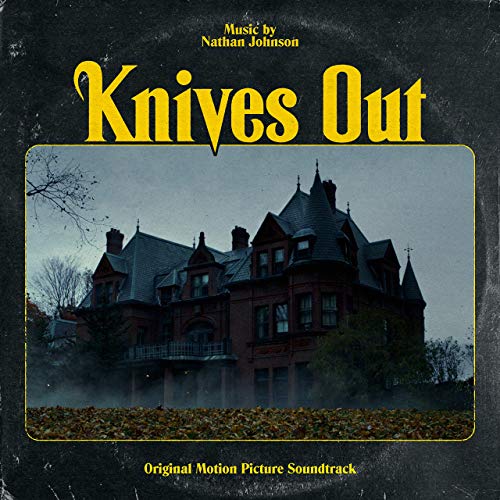 This week in Exploring Soundtracks, we’ll be taking a look at Rian Johnson’s “Knives Out”. Whatever you may think of “The Last Jedi”, you can’t deny that Johnson has a knack for approaching familiar stories in fresh ways. For his take on a classic whodunit, Johnson enlisted the help of his cousin Nathan Johnson, who also composed the soundtrack to Johnson’s previous films, “Brick”, “Looper”, and “The Brothers Bloom”. And Johnson doesn’t disappoint with his original score to “Knives Out”, which helps build the tension, while also heightening the emotion of every twist and turn.

But before we get into the soundtrack itself, first here’s a brief synopsis of “Knives Out”, for those who either haven’t seen it yet, or just need a quick refresher.

“Knives Out” is a modern whodunit that follows the demise of renowned crime novelist Harlan Thrombey on his 85th birthday. Under the mysterious circumstances of his death, the slick and inquisitive Detective Benoit Blanc (Daniel Craig) travels to Thrombey’s estate to investigate. From Thrombey’s dysfunctional family to his staff, Blanc must sift through the many lies, red herrings, and misleads to discover the truth behind Thrombey’s untimely death.

Nathan Johnson’s soundtrack to “Knives Out” opens with the title track featuring a string quartet in G Minor. If there was such a thing as a perfect opening track for a murder mystery, “Knives Out!” is it. It’s sharp, cutting, and precise in all the right ways — like a well-carved blade. The incessantly furious strings capture the nervous energy and tension that permeates throughout the film. And if there’s one good thing that every murder mystery needs, it’s tension.

While the furious strings make a good accompaniment to a murder mystery, all high points of tension need their low points for contrast. And Johnson’s score definitely does a good job of bringing the best of both worlds to the film. There are plenty of tracks that add their own sense of mystery with sweeping strings and delicate piano notes. The tracks “Like Father, Like Son”, “The Thrombey Family Theme (Solo Piano)”, and “Snooping” all add to the more contemplative and slightly jittery feelings.

The heightened tension breaks out again halfway through the film with the recurrence of the theme. “Knives Out! Pt. II (The Will)” meshes well with a major plot twist, bringing some thunderous energy to a surprising scene. Additionally, the tracks, “Foul Play”, “The Dumbest Car Chase Of All Time”, and “Blackmail” all crank up the building tension. Penultimately, “Blanc’s Tale, Pt. I” and “Blanc’s Tale, Pt. II” tie the whole film and score together with back to back tracks that run through the whole suite of emotions felt throughout the film.

The final “Thrombey Family Theme” brings a nice closure to the fate of the Thrombey family, acting as a sort of neat little musical bow to Nathan Johnson’s soundtrack.

Overall, Johnson’s soundtrack to “Knives Out” has pretty much everything you could ask for in a murder mystery score. It’s got as many surprises in it as the plot itself, and matches it in tone every step of the way. Not only is it full of effective moments of tension and mysterious suspense, but it also leaves enough room to become fully engrossed in every twist and turn on screen. For a thoroughly enjoyable film and soundtrack, the Johnson’s absolutely deliver.

That about does it for today. I hope you enjoyed our discussion of the soundtrack to “Knives Out”. We’ll be back next week with another soundtrack to explore.

Song of the Day: “A Real Hero”

“Kindergarten Teacher” surprises in the worst and best ways