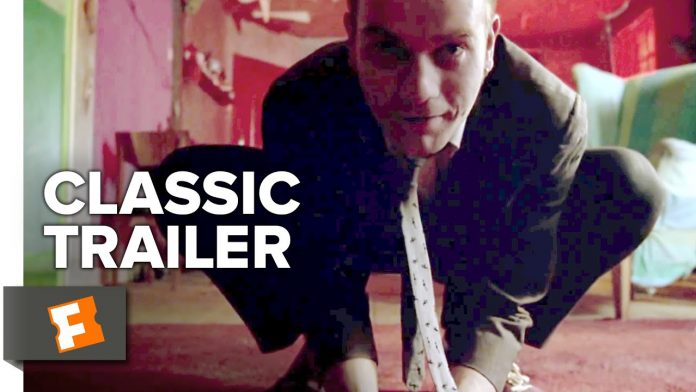 “Choose life.” Those are the first words spoken by Ewan McGregor’s Mark Renton, followed by what sounds like the loose, improvisational beat poetry that could only be made by someone living on the fringes of society. The film hits the ground running-literally, as Scottish youths (Renton and Spud) are seen running away from beat cops after stealing what looks like a collection of DVD’s. “Trainspotting” isn’t exactly about the most admirable and likable people to be seen in cinema. But its power derives from its ability to empathize with these bizarre characters. Danny Boyle’s film doesn’t demonize heroin addiction just as much as it doesn’t glorify it. It simply allows us to experience the world through these addicts’ eyes and, as a result, feel the full spectrum of their emotions.

What really defined this movie, more than anything, was its iconic soundtrack. Iggy Pop’s “Lust for Life” is practically ingrained with the image of Renton running through the streets of Scotland. Also featured are Blur, Pulp, and Lou Reed. It’s a combination of modern Brit-pop and vintage classics that represent the eclectic set of tunes Scotland’s inhabitants listen to. It’s also what generally makes this pretty harrowing tale more bearable to watch. Seeing people waste their lives away on heroin is a lot more fun with a soundtrack to back it up.

What’s particularly fascinating to note is the film’s unconventional structure. There isn’t really any main conflict, no overall goal the characters’ are heading towards, not even an antagonist. All it is are a series of episodes in their lives, turning instead into a patchwork mosaic of Scotland’s disenfranchised. As such, its very narrative structure is countercultural, eschewing Hollywood rules to make something that feels like it was made on the outskirts. In a film that feels like such a direct middle finger to society, the manner in which “Trainspotting“ is written and directed fits comfortably with its thorny themes.

However, this movie is basically defined by Danny Boyle’s singular direction. It’s an electrifying thing to behold, like being strapped to a roller coaster with no harness. His needle drops hit like the perfect drug-induced stupor, and his fleet-footed camera zooms across sets with the finesse of a dancer. His touches of surrealism feel less like flights of fancy and more like the grungy expressionism of William S. Burroughs. It takes a certain kind of mind to create something that’s as inspired and disgusting as the toilet scene. It’s a directorial style that works best with the unconventional writing methods of the script, turning the film as a whole into a uniquely rebellious monster.

Boyle’s career progression has been an odd one to say the least. After the deliciously dark comedy of “Shallow Grave” he releases the cheekily rebellious “Trainspotting” before following those up with a series of pretty standard Hollywood fare. The closest he got to the edge of “Trainspotting” was the blindingly energetic, neorealist inspired “Slumdog Millionaire” and even then, that is a pretty standard rags-to-riches Dickensian tale. One wonders what happened to the Boyle of old. Was it simply age that dulled his creative blade? Or has he been sucked into the very system he sought to shake up? Maybe, at the end of the day, he just decided to choose life.