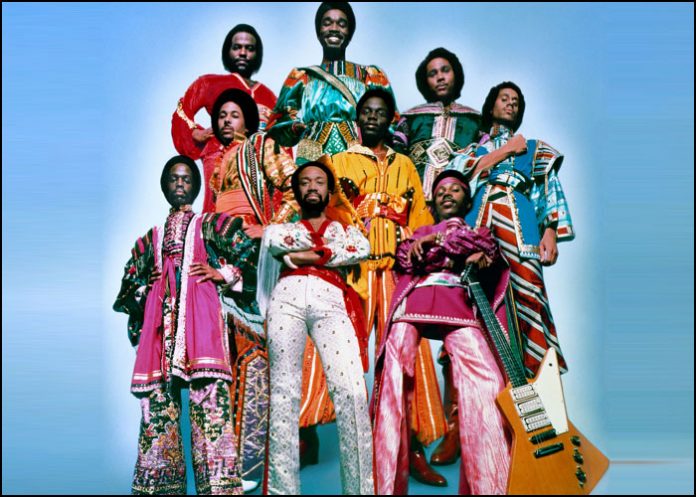 It’s 1969 in Chicago, Illinois. Former Ramsey Lewis Trio bassist Maurice White packs his bags and heads to the west coast, trading in cold Midwestern winters for the eternal California sunshine. What he also brings is his band, The Salty Peppers, to get into the soul/funk scene out there.

During this time, White began to have dreams, profound visions where he communed with the Creator of the universe and received orders to create a group that spread peace and joy around the planet. These visions would eventually lead The Salty Peppers to transform into Earth, Wind, & Fire, the cosmic messengers of funk ecstasy that everyone knows today.

By 1977 the band was the king of the pop charts. Their album that year, “All ‘n All,” rose to #1 on the Top Soul Albums charts, mesmerizing listeners with its mixture of infectious dance and heartfelt balladry.

To see Earth, Wind & Fire tour in the late 70s was too take part in a spectacle, one rooted in a new vision of mankind that had come out of the Civil Rights Era. The band was seeking to show their audience a new way to express themselves, as both blacks and whites shaking off the burden of oppression and separation and as spiritual beings who were free to live and love as they pleased.

As Maurice White is quoted on the EWF website:

“Although we were basically jazz musicians, we played soul, funk, gospel, blues, jazz, rock and dance music…which somehow ended up becoming pop. We were coming out of a decade of experimentation, mind expansion and cosmic awareness. I wanted our music to convey messages of universal love and harmony without force-feeding listeners’ spiritual content.”

Since EWF was birthed from White’s dream of inspiring the masses and exalting spiritual union with the creator, the message of their songs naturally followed that mission. One can sense, and feel, this message in songs like “Fantasy” and “Spirit,” which overtly espoused their philosophy of joy and brotherhood. Take a little bit of “Fantasy”:

“You’ll find a friend — everlasting love
You can depend, everytime you smile
You bless a child
Our spirit perpetuates
Our spirit meditates love and faith”

Many bands of the era wrote uplifting songs, with positive lyrics and upbeat soul-funk breakdowns behind them. Just think of 70s staples like Kool and the Gang, whose hit “Celebration” still graces almost every wedding dance floor ever in existence. Other groups such as Sly and the family Stone tapped into similar feelings with hits like “Thank You” and “You Can Make it if You Try.”

But no one touched the heights that Earth, Wind & Fire achieved. Maybe it was the clear spiritual vision that White had for the band, their overt imagery of Egyptian and other African symbols, or the unique Afrocentric Christian positivity that permeated their music. Whatever it was, the passion and energy that all members put into EWF helped send it skyward, both commercially and critically, at the same time inspiring millions of fans to inject a little more positive spiritual perspectives into their lives.

Their live shows at the time were wild, excessive, and rich with joy. There were flashing lights and special effects, magical illusions orchestrated by none other than David Copperfield, and the soaring harmonies, eye-popping outfits, and smiling faces of the band, always amping up the audience with their musical ecstasy.

But there was more than just theatrics with Earth, Wind, and Fire. Underpinning the profound spiritual imagery of the band was their commitment to living lives in harmony with their ideology. One of these was a clean life for the band.

This commitment would be one of the things that set Earth, Wind & Fire apart from the rest of their contemporaries in the late 70s. In one of the most over-the-top times of rock ’n’ roll excess, Maurice White insisted that his band live clean, aiming to cultivate the inner spiritual life that their songs urged people to live.

This commitment acted as a strong foundation for the band to shine with their full spiritual force, acting as cosmic messengers of peace and joy for the people. At the height of their power in the late 70s, riding on their unique and ecstatic brand of soulful funk disco, no one could touch them. Trying to resist smiling and dancing to hits like “September” and “Serpentine Fire” was like trying not to get wet in the rain.

Though I knew none of this as a young kid hearing EWF for the first time, I didn’t need to. My guitar teacher had burned me a CD of some of their greatest hits, telling me that they were one of the best bands to have come out of the 70s.

On a warm spring day I listened to EWF for the first time. The sound of “September” exploded out of my car speakers, and I was hooked for a lifetime.

I experienced the joy of Earth, Wind & Fire’s music before I even had comprehended the words, or learned about White’s vision and the overarching concepts of love and peace the band believed in so strongly. Their roots in funk and soul and their spiritual beliefs would be things I’d learn about later as I dug more and more into the legend of EWF.

With Earth, Wind, & Fire, you don’t need to know anything. You can feel the joy pulsing and vibrating out of their music with every note, with every gorgeous harmony and insatiable rhythm.

This musical joy, though born out of a tumultuous political and social situation, at once eased the pain of the times and transcended the troubles of the world. Through years that included Nixon terror tactics against resistance groups, Vietnam War atrocities, and lingering racial strife, EWF was a band that empowered black men and preached an eternal vision of the harmony and love that mankind was heir to.

Maurice White, Philip Bailey, Verdine White and the rest of the group didn’t just do this with upbeat songs and positive lyrics. Their musicianship and training was at par with some of the best in the world, freeing them up to explore currents of joy in mood, texture, and substance, leveraging insatiable world rhythms, soul, funk, and gospel traditions, and disco pop sensibilities to create music that was truly accessible and inspiring to all.

Few bands ever achieve such a wide and wondrous musical palette, which makes Earth, Wind, & Fire (along with few others, many from the 70s), some of the last mega popular acts to actually be world class musicians in their own right.

Earth, Wind & Fire’s legacy continues to influence the world. Countless hip-hop and rap artists have sampled them, wedding parties continue to dance to their hits, and daily people are inspired by their message.

EWF was a band that got so popular that they are now an inseparable part of American and world music history. Their music is constantly played, covered, reimagined, and remixed, even in far off places like Japan. As an example, here’s one of my favorite EWF remixes from Japanese artist Fantastic Plastic Machine:

The classic EWF lineup, led by White, would play on for many years, releasing albums for the next few decades even as music tastes changed and their popularity dropped. After retreated from the spotlight in the early 2000s, Maurice White passed away in 2016 from complications relating to Parkinson’s Disease, though his band, led by Philip Bailey and Maurice’s half-brother Verdine White, still play on.

On the band website, fans have been asked to write a few words about White and the impact that EWF’s music had on them. Here’s a sample from just one of the many tributes:

Every time I hear September, it always makes me feel like dancing on the spot. Puts everyone else in a good mood too. Thank you, forever, for the magic, and many years to come.

White and the band’s message of peace, love, harmony and spiritual exaltation will live on in musical history, as well as in everyone that has been touched by the cosmic joy of Earth, Wind, and Fire’s music, especially for everyone that feels that, even in the midst of the uneasy times we live in, there is still hope.

As Maurice would say, “Keep Your Head in the Sky.”

Pieces of a Dream Celebrates 40 Years of Smooth Jazz