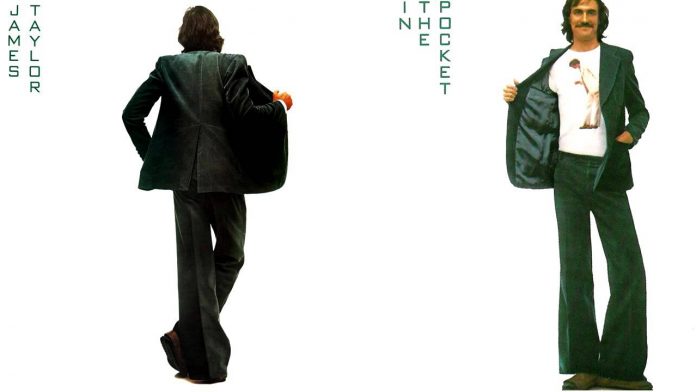 It’s 1976, and James Taylor was on top of the world. He’d just scored a huge hit with “Gorilla,” his sixth studio release and a huge relief after the relative disappointment that was “Walking Man.” “Gorilla’s” two singles, “Mexico” and “How Sweet It Is (To Be Loved By You),” were both big hits, and brought the album straight to the top five of the Billboard charts. To add icing on the cake, he’d just welcomed his daughter into the world, who is sung about in the song “Sarah Maria,” one of the most tender and expressive songs he’d ever written.

Now, a year later Taylor was back for his next album “In The Pocket.” On the cover, he’s wearing a t-shirt with the cover art of “Gorilla” on it, surely a sign of Taylor’s smug knowledge that he was now one of the biggest pop stars in the world. He had officially become the king of schmaltzy soul-pop, redoing all of our favorite Motown soul songs with all the right chords but none of the soul.

Still, there’s something endearing, and relatable, about the way Taylor delivers these soulful numbers, as if he knew that he was cooking us up a white bread version we all secretly liked. Yeah, maybe “Woman’s Gotta Have It” didn’t have the same flair as the Bobby Womack version, but who really cared to be honest? Taylor was the everyman the pop world had been waiting for, the hip dad rock pioneer who delivered all his lines with a wink and a smile.

And that voice. Who could resist that voice? Even after all these years, I haven’t heard a voice that could match Taylor’s. It’s at once buttery smooth and effortlessly friendly, as if your best friend was telling you a story by the poolside on a summer night. This angelic voice is what made Taylor able to achieve the enduring fame that he has, becoming the voice of glazed-over American summer daydreams.

True to form, “In The Pocket” was a continuation of what Taylor was doing on “Gorilla.” In a deft mix of acoustic guitar, electric piano, acoustic piano, and saxophone riffs, Taylor was continuing to dispense the drug that America wanted, which was smooth sounds and relatable songwriting. By 1976, he had perfected this method, and every track was the epitome of that vision Taylor had crafted over the last 6 years.

Taylor does find time to dig into some deeper issues on “In The Pocket,” such as on the excellent track “Junkie’s Lament.” The song features lyrics inspired by Taylor’s personal struggle with drugs:

“Mama, don’t you call him my name

He can’t hear you anymore

Even if he seems the same to you

That’s a stranger to your door

Go on, ask him what’s he come here for”

“Don’t Be Sad “Cause Your Sun Is Down” feels like Taylor is talking to every single one of us. The song put its figurative hand on our shoulder, comforting us at our time of most need. The song’s melodic structure is absolutely effortless, moving swiftly between jazzy chords that poise distinctly on 7ths until moving into the climatic end of a line:

“Don’t be sad ’cause your sun is down, you can rise above it.

Don’t be sad ’cause you’re on your own, you have to learn to love it.

Don’t be sad ’cause your sun is down, you’re gonna find your way.

Don’t be sad ’cause your day is done, there’s another day, everyday,

Everyday I wake up just the same, waiting for something new.

Every night I have myself to blame for the dreams that haven’t come true.

And of course, there is the single “Shower the People,” which became a Taylor standard and peaked at #22 on the Billboard charts. It was the album’s biggest hit, helping it get to Gold certification by the RIAA and become, over the years, one of his fan’s favorite albums.

So why has the album endured? It is that delicate reimagining of soul and pop that Taylor strings together on “In The Pocket” that captured many of his fans’ hearts. He isn’t the best songwriter or a particularly interesting musician in any right, but sometime in the mid 70s he became America’s sweetheart, forever earning a place in the great American songwriting tradition.

The Secret Sisters Tell It Beautifully on “You Don’t Own Me...