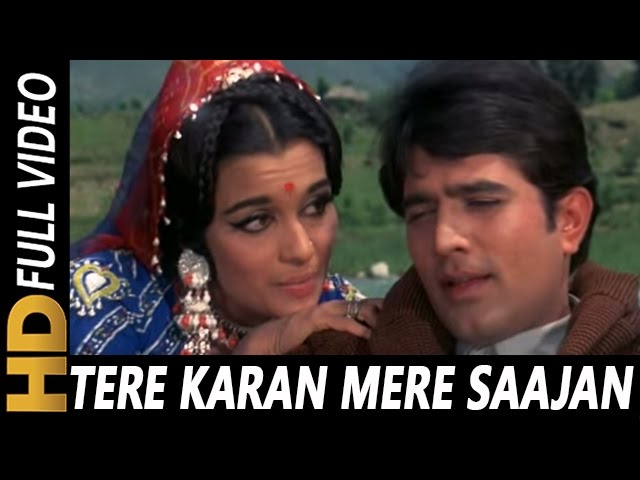 On the other hand, Deepali meets Ajit (Rajesh Khanna) in the village, who is an epitome of kindness. She appears to be impressed by Ajit and so is he. After a few meetings, she realizes that he is the epitome of virtue, as well. The next time they meet, Deepali is wearing a traditional village dress to impress Ajit. She also informs him that she is not what she appears to be. Her name is Varsha and she had come looking for a thrilling experience. Now, she is finding it difficult to come out of the quagmire, she found there. Ajit does not give in to her wooing. So, she sings this song.

The music is this song, Tere karan tere karan, was composed by Lakshmikant-Pyarelel and the lyrics were penned by Anand Bakshi.

The girl accuses the man, “I woke up in the night and then fell asleep. Then, I disappeared in my dream world. All because of you!”

The video opens with Asha Parekh sitting close to Rajesh Khanna and beginning to sing this song. He pushes off her hand from his shoulder. He gets up and leaves. She also gets up to follow him. Then, she tries to balance on some stones on the river.

Asha Parekh is about to lose her balance and he runs to her to support her. Asha Parekh’s actions are very graceful. They show the dancer in her. Rajesh Khanna realizes that he’s been tricked and he leaves her. He moves close to her again and touches her nose, affectionately.

She blushes and runs away toward some trees, which have fishing nets connected to them for drying. He follows her. Rajesh Khanna traps her in one of the nets. Asha Parekh requests him to get her out of the trap. Initially, he refuses.

Then, he relents and accepts her love. The song peters out and the video also ends there.

There does not seem to be any cultural influence on this song. The song and the artists are fantastic. The video is watchable for the very feminine Asha Parekh. This goes to prove that how feminine a Tom Boy can get, at the right stimulus. 🙂