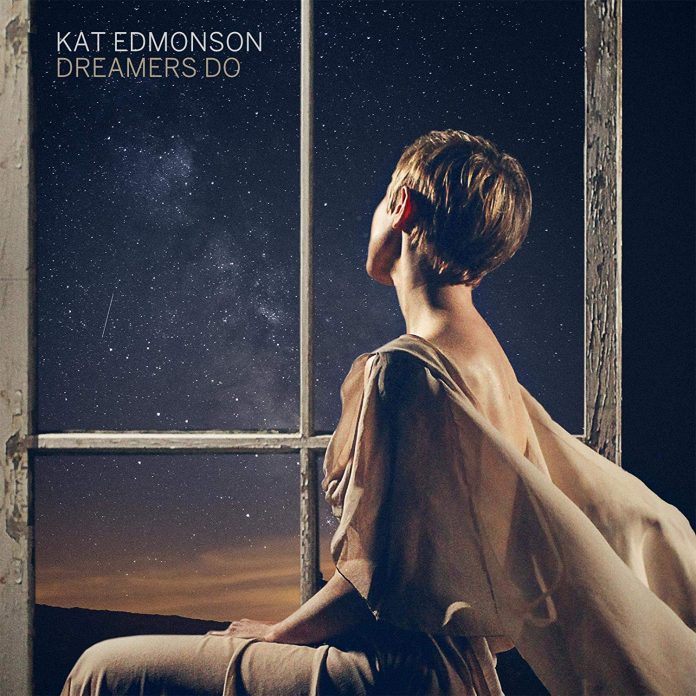 2020 is the year that Kat Edmonson really embraces the dreamer inside of herself. After nearly 20 years in the music business, the singer seems completely comfortable with her style and voice, crafting her most complete vision of vintage jazz-pop on her latest record.

Kat’s new album “Dreamers Do” assembles a catalog of jazz standards and original compositions to paint a whimsical musical portrait of hopes, dreams, and wishes, all lived out in one evening. It’s a nighttime album for those who lay awake wondering what life might bring to them, and who need a touch of wonder to aid their journey into the stars.

At first glance, it seems like a more positive answer to Frank Sinatra’s classic album “In The Wee Small Hours of the Morning.” While on Sinatra’s album you can imagine Frank glumly staring out his window at 3am, a cigarette smoldering in between his fingers, here you can see Edmonson staring out the window (as she does on the album’s cover) and wondering about dreams, starlight, and life paths. Instead of wallowing in the sadness like Sinatra, Edmonson seems intent on finding the good things in life.

That’s why Edmonson shuffles through the bins of jazz classics and Disney sing-a-longs sure to delight fans new and old alike, even if some of these songs sound a little tired at times.

For songwriters staring out the window, dreams and wishes are often on their mind. “Dreamers Do” is an invitation to live inside of this dreamscape with Edmonson. At times the effect is thrillingly nostalgic and wonderfully mesmerizing, yet at others falls a little flat in its delivery. What is apparent throughout, though, is the hard-won optimism that Edmonson evokes.

Just eight years ago the scenery wasn’t so bright for Edmonson, though. Her 2012 album “Way Down Low” was, altogether, a fairly dark and desperate record, reaching down into the depths of the soul and plumbing into the emptiness and neediness inside of all of us. Despite that album’s heaviness, Kat’s most optimistic songs often shine through. “Lucky,” a cheery song about dreams and life, has remained one of her most iconic songs, and seems like the forerunner to “Dreamers Do” in many ways.

“Life is just a dream / lucky you / lucky me.” Those lines from “Lucky” float back into my mind as the first songs from “Dreamers Do” float through the speakers.

“Dreamers Do” takes Edmonson’s dreamlike wanderings to the next level. Conceptually, the record moves across a slightly fantastical world of someone dreaming and reflecting throughout the night. It moves from dream scene to dream scene, from hope to wish and back again, stopping and soaking in the

The album takes a few interesting risks, though, especially with the wildly different take on “When You Wish Upon A Star.” Save the lyrics, the iconic song sounds nothing like the original, shifting around processed vocal harmonies and a slightly Latin rhythm.

Moving on to the faithful adaptation of “Chim Chim Cher-Ee,” the album starts to feel like the shifting world of  a dream. This feeling is accentuated by the interludes, which bookend the songs with ambient sounds and instrumental wanderings. One of the stranger songs is “Someone’s in the House,” one of the few songs that Edmonson penned for the album.

Edmonson is at her best on melancholy numbers like “Very Good Advice,” a bottom-of-the-bin track by Sammy Fain and Bob Hilliard from 1951’s Alice In Wonderland. The gently bobbing song is held together by Edmonson’s bubbly voice, which creaks and crumbles so gently at the edges that it betrays a little bit of uncertainty in Edmonson’s night of dreaming:

“I give myself very good advice

That explains the trouble that I’m always in”

The singer’s aching tremolo and raspy high notes hit home on the track, which features some inspired piano in a spare arrangement that feels as though you’re sitting at the bar watching them play right in front of you.

Edmonson continues to open up on the next track “Too Late To Dream,” another song she penned for the album, and one of the finest tracks on “Dreamers Do.” The gently bouncing melody would have fit perfectly in any number of mid-century musicals, and the angelic backing vocals provide the perfect accompaniment to Kat’s yearning vocal work:

“Tell me little star, have I come too far?

Have all these dreams only been just that, just dreams?

Can I keep on believing like I could always do? Or is it too late to dream?”

As it journey’s through a night of dreams and wishes, “Dreamers Do” offers a little bit of every mood – questioning, hopefulness, angst, and wonder – and a little bit of various sounds and styles that the world of pop, jazz, and musicals have given us over the last century. Edmonston has proved herself as a true curator and purveyor of this world. If you’d like to join in, all you have to do is step into her dream.