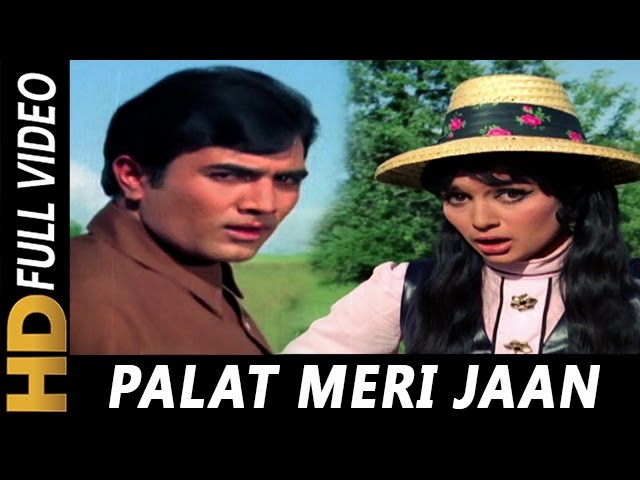 Palat meri jaan is another of my favorite Asha2 songs. Asha Parekh is a Tom Boy and Asha Bhonsle has sung this song in the required manner. I feel that Asha Bhonsle Ma’am’s this talent of singing like a Tom Boy has not been exploited much. That is disappointing. 🙁

On the other hand, Deepali meets Ajit (Rajesh Khanna) in the village, who is an epitome of kindness. She appears to be impressed by Ajit and so is he. After a few meetings, she realizes that he is the epitome of virtue, as well. One day, Deepali acts as if she has had an accident, near where Ajit had parked his tractor and had fallen unconscious. Ajit approaches the jeep to save her. He lifts her on his shoulder and takes her to a nearby cottage to revive her. He soon finds out that she is just pretending to be unconscious. Ajit forcefully manages to push her out of the cottage. Outside, he sees his ward Chickoo (Junior Mahmood) and is about to leave the place.

Deepali uses Chickoo’s catapult to hit a pebble at Ajit’s back and begins to sing this song.

The music is this song, Palat meri jaan, was composed by Lakshmikant-Pyarelal and the lyrics were penned by Anand Bakshi.

The girl sings, “Turn back, my Dear. I am ready to give up my life for you. Where is your attention? The road to love is filled with obstacles. Where are you going? The road is here.”

Rajesh Khanna acts as if he has given into her invitation to fall in love. But, he immediately steps on first Asha Parekh’s foot and then Junior Mahmood’s foot. Asha Parekh and Junior Mahmood begin to jump on one of their legs, each.

Rajesh Khanna entices the little boy with a rupee note and solicits his help; in tying Asha Parekh to a tree trunk. But, he has tricked the little boy and has tied him also to the tree trunk with her. The song peters out and the video ends as he picks up her hat to place it on her head.

There does not seem to be any cultural influence on this song. We’ve heard of eve-teasing. This song is a sample of Adam-teasing! 🙂 The song and the artists are fantastic. The video is watchable for Tom Boy Asha Parekh. 🙂