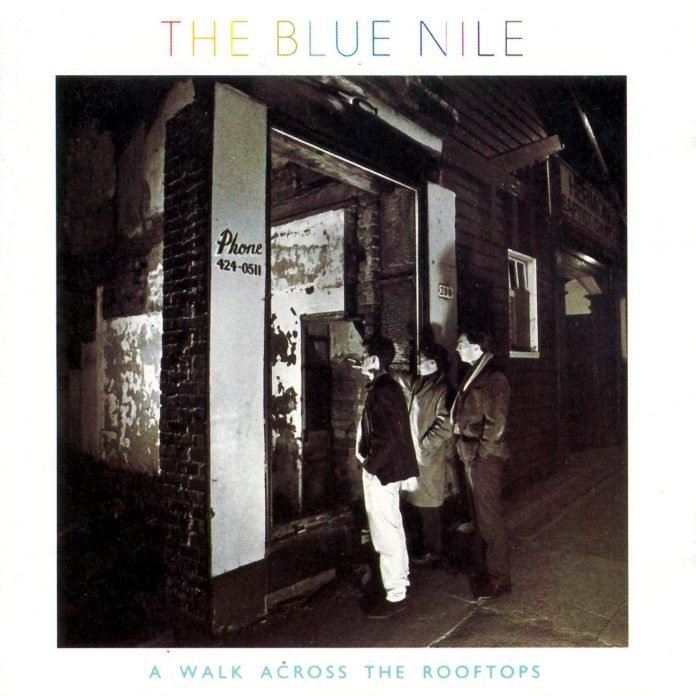 I first discovered The Blue Nile by accident. I had wandered into a vinyl store in the backstreets of Manhattan, looking for nothing in particular. In a dusty back bin a dark corner of the store (where no one had seemingly been in years), I saw a conspicuous-looking vinyl leaning against the back of a milk crate. The cover consisted of three men standing on the street, staring into some abandoned space. A phone number is prominently displayed on one of the sides (424-0511: Just in case you wanted to call).

What they’re looking can’t be discerned from the photo, though one man is pointing as something of interest. Though we might never know what that thing is, we do know that “A Walk Across The Rooftops” was an excellent debut from The Blue Nile, the best Scottish band that you’ve never heard of. The seven tracks on the album slyly mixed programmed drum beats, icy synths, and idiosyncratic arrangements to build tiny, romantic worlds that seemed like microcosms of emotion in an unfeeling world.

Soon this accidental discovery would come to soundtrack my life for the next year, providing a theatrical backdrop to my own personal heartaches and misunderstandings. I’d take the record with me on an ill-fated trip to California to meet up with a girl I was interested in. I sent her a few songs as I was biking up the coast to meet her in Big Sur, my heart engorged with hope. It wouldn’t be an exaggeration to say that Paul Buchanan and his band were the voice to the romanticism that I felt burning inside of me.

As much as they soundtracked my hope, The Blue Nile also soundtracked my inevitable rejection and disappointment. Riding the train southwards towards Los Angeles with tears in my eyes, the words of “From Rags To Riches” filled up my ears: “I am in love, I am in love with a feeling / A wild wild sky, a wild wild sky / Fences and tumble down bridges surround and divide / I wear a coat of many colours, of many colours.”

A long listen to The Blue Nile will impose on the listener the notion that Paul Buchanan is somehow a prophet of romance itself. It seems he is not telling his own story, but that of romance itself; that lost, indomitable spirit that sees a glimmer of another world in this one. “Stay” was the obvious single from “A Walk Across The Rooftops,” offering a simple but emotional plea for a lover to stick around. It isn’t the simplicity of the lyrics, but the emotional honesty held within them, that capture the listener and pull them into The Blue Nile’s world:

Can be so free and easy now

Well, we’ll be free and easy

Stay, stay, stay and I will understand you”

Paul Buchanan at once manages to be a passionate romantic and a casual observer of life. He sees the summer girls all around him so free and easy, and feels that atmosphere so acutely that he wants his relationships to mimic it in some way. The sense of observing the world and projecting it onto your own experience is the opposite of projecting your feelings onto the world. As much as Buchanan pours his romance into the city around him, he also is sensitive to the feelings and experiences of the world, wanting to merge his own romance with the feeling of summer girls in disarray, or the sound of automobile noise and the sight of “exit signs and subway trains.”

My theory is that The Blue Nile is music made for those who feel the world. It is music crafted for empaths, for feelers who feel the weight and meaning of every part of the world around them. Just walking around the neighborhood or around the park can be a monumental experience, such as traveling was for the late author and poet W.G. Sebald, whose elegiac prose seems like a fitting accompaniment to Buchanan’s yearning voice and romantic lyrics.

The Blue Nile would move glacially as a band, as if the sheer effort of their music required years to synthesize and fine tune. Their follow-up to “A Walk Across The Rooftops” would not appear until 1989. The wait was not without its rewards though. “Hats” would become perhaps their most celebrated achievement, somehow encapsulating the sound of the 80s even as the decade was fading away. It’s lush synth tones and even more focused sound was more accessible to everyone, lending a sense of grandeur that lacked from the normal person’s daily life.

“Over The Hillside” encapsulated all the yearning and wishing that Buchanan had stored up over the five years between albums. “Walk me into town / The ferry will be there / To carry us away into the air.” The merging of fantasy and reality could have come out of a Gabriel Garcia Marquez novel, so natural does it seem that the ferry could really fly off into the stars. Even though he promises later in the song that “Tomorrow I will be there,” he then goes on to say that “I can’t go on and I can’t go back.” Buchanan may be weary of the pain of love, but he’s trying to make it work.

“Sometimes I walk away / When all I really wanna do / Is love and hold you tight / There is just one thing I can say / Nobody loves you this way.”

“The Downtown Lights” starts with these devastating lines. Later on Paul observes that “In love we’re all the same / We’re walking down an empty street.” It’s just his way to find the simplest way to say how we all feel when confronted by the overwhelming feelings inside of us. But that’s The Blue Nile in a nutshell. No one has so faithfully recreated the internal experience of love and sorrow like Buchanan and his band, creating an atmosphere that is the equivalent of diving into an isolation tank of intimacy.

It’s been 35 years since “A Walk Across The Rooftops” was released. Although the band never achieved huge popularity or fame, the world that they created is still unique in music. No one has made something so idiosyncratic or magically intimate as these three Scottish men did in the mid to late 80s. If you decide to plunge in, you might find yourself lost in a world that dares you to uncover your deepest desires, and see where they lead into the dark, uncertain curtain of night.

Budget Analyst Job in Hadley, Massachusetts – Department of the Interior

One response to “Paul Buchanan and The Blue Nile: A Retrospective”

Fun Jack White is back