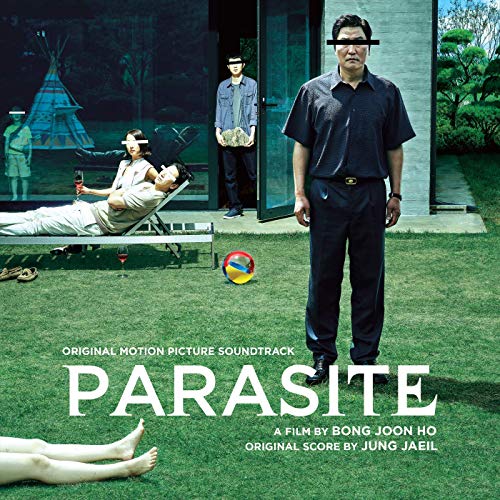 For the past few weeks, we’ve been looking at horror films specifically (because they’re the best kind of films to watch in the winter). But this week, we’re taking a little bit of a detour by taking a look at a Korean black comedy thriller.

“Parasite” is the seventh feature film by Korean director Bong Joon Ho which premiered at the 2019 Cannes Film Festival. Since it’s debut at Cannes, where it won the Palme d’Or for best film in the competition, “Parasite” has become one of the most critically acclaimed films of the year. Jung Jae-il, the composer behind Joon-ho’s “Okja” among other films, brings another amazing, original score to his newest film.

But before we get into the soundtrack itself, here’s a brief synopsis of “Parasite” for anyone who either hasn’t seen the film, or just needs a quick refresher.

“Parasite” is a black comedy thriller that follows the story of a poor family who scheme their way into being employed by a wealthy Park family by posing as sophisticated and highly qualified professionals. As the relationship between the two families becomes more symbiotic, greed and discrimination threaten to tear them apart.

Jung Jae-il’s original score is the perfect companion to Bong Joon-ho’s genre-blending film of class divide. The piano-driven soundtrack manages to blend the kind of tension fit for thrillers with a more gentle and playful air. The combination gives the score a sense of unpredictability that pits hope against gloom, and humor against severity.

The first glimpse of Jung Jae-il’s score we get comes in “Opening”. Led by a somewhat playful piano, there’s a sense of whimsy we’re given that goes hand in hand with the more baroque addition of strings and bells hinting at something beneath the surface. Going along with this, “Conciliation I” and “Conciliation II” brings out the baroque even more with harpsichord and stirring strings. Still early on in the film, we only get a taste of the coming tension.

Things start to pick up with “Plum Juice”, a track that brings up a darker, heavier motif balanced by its polar opposite in gently chiming bells. The two opposing sides dance around one another, and between them we can begin to hear the rising tension more clearly.

In the orchestral suite, “Belt of Faith”, Jung Jae-il’s score hits its stride. This seven minute track brings a sweeping grandness and a more bombastic feel to the score. All of the opposing elements of emotion duke it out in “Belt of Faith”, consequently driving up the tension even further.

The final song of the film, “Soju One Glass” had lyrics written by Bong Joon-ho specifically for the film. Sung by one of the cast members, its lyrics directly correlate with the story, as well as the perspective of Kevin, the character who sings it.

Overall, Jung Jae-il’s soundtrack to “Parasite” is as intricate and captivating as the film itself, and a perfect companion to the characters on screen. There aren’t a lot of recent soundtracks enjoyable enough to warrant listening to them without their accompanying stories playing out on screen, but Jung Jae-il’s score to “Parasite” is definitely one of them. I’ve been listening to it on repeat since I finished watching “Parasite” for the first time. Moving, genre-blending, and poignant, you couldn’t ask for more from Jung Jae-il.

That about does it for today. I hope you enjoyed our discussion of Jung Jaeil’s original soundtrack to “Parasite”. We’ll be back next week with a new soundtrack to explore.