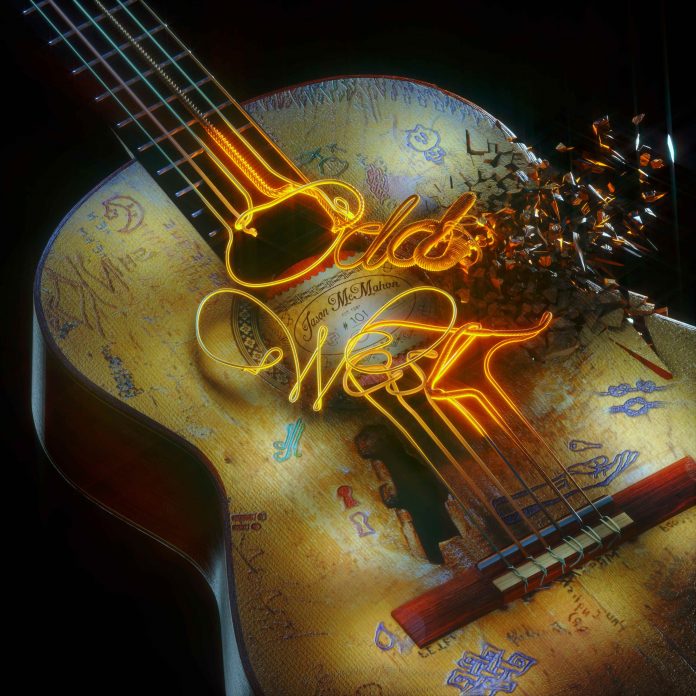 At this point, the floodgates of musical genres have been burst open, allowing sound to flow freely in its wild and unpredictable course. For many musicians, this new frontier of exploratory musical frontier has been a boon, allowing them to explore sounds and ideas that interest them and stir their curiosity.

Jason McMahon, a longtime touring musician with acts such as Skeletons and Chairlift, has just indulged in his own curiosities with a new LP called Odd West. Though known for his experimental guitar work and technical guitar prowess, “Odd West” finds McMahon searching for something more relatable, an acoustically-oriented album he could play at weddings or for his parents.

The result of this is an album that dances the line between instrumental new age and dreamlike wanderings.

McMahon’s pastoral, sparkling guitar work has much in common with auteurs such as William Tyler and Ryley Walker. They all produce work that is open and explorational, reflecting the wide open frontiers of places like the American West. Also like these other guitarists, his work digs into ideas of traditionalism and experimentation, often fusing the two genres in interesting and unexpected ways.

Like spinning a yarn about traveling through a landscape, the songs on this album weave in and out of each other like a tapestry. “Odd West” was written in one tuning, each becoming part of one long, overarching story. This sense is reinforced by song titles like “Book of Knots,” one of the album’s singles. It’s on tracks like this where McMahon distinguishes himself as a truly gifted arranger and instrumentalist. The multi-layered guitar parts on the song swirl and shuffle around each other like a daydream.

Softer tunes like “Sunshine for Locksmith” mix pastoral, Windham Hill-like guitar work with a chorus of voices, allowing the track to navigate the space between the sacred and the everyday. The song evokes the persistent stories that intermix with our day-to-day experiences. You get the sense that these tracks exist somewhere between sleeping and waking, somewhere in the midst of that moment when the locksmith woke to sunshine on his face.

“Ambisinistrous,” the third single on the album, benefits from a more reserved production, allowing McMahon’s guitar skills to take center stage. Quick, flamenco like strokes of guitar evoke the Spanish classical masters that have lent such beauty and magic to the work of playing the guitar. For an electric guitar player that is just starting to explore the world of the acoustic guitar, McMahon seems to be picking up the feel of the instrument like an old hand, capturing that tumbling, expectant rhythm that only the acoustic guitar can capture.

The dreamlike arc of “Odd West” doesn’t let up across the entirety of the album, often floating off into curlicues of fantasy and surrealness. The album opens up with a swell of ambience and tinkling piano before giving way to the guitar on “Old Career in an Old Town,” which evokes the wedding music McMahon was trying to mimi on this album. You can feel the sense of a great cultural tradition in this intention, which balances itself at the intersection between American folk music and new age exploration. This is especially true on tracks like “If it Rhymes, It’s True,” which features fast hand claps reminiscent of a folk dance number. The vocal parts add in the dreamlike feeling that you are somehow tumbling between worlds, trying to find your bearings in some amorphous landscape.

The overarching appeal of “Odd West” is that it accompanies daily life so well. Though I try to avoid the term “background music,” in many ways that is exactly what role this album plays. McMahon repeats his guitar parts in “Odd West” in almost drone-like fashion, building them into some kind of religious fervor hearkening back to American primitive artists like Robbie Basho and John Fahey. This sound easily slips into the background as the world transforms around you.

“Odd West” can become a bit repetitive, and is at its weakest when it slips into the kind of Windham Hill new age tropes that any acoustic guitar music is prone to. These moments are rare, though, as McMahon faithfully provides touches of mystery and wonder in his arrangements. Especially interesting are the female-led choirs that float in and out of the songs. While the acoustic guitar may sound grounded in tradition, the group of voices they’ve recorded sound like they were spirited from some mystical kingdom from a fantasy novel.

Other tracks experiment with genre enough to give the album some diversity. “This Is Forgetting” incorporates a more rock-oriented rhythm into it, which lends it an air of space that many other tracks don’t have. “Who We Are,” though sounding much like a Windham Hill track from Will Ackerman, is so hauntingly beautiful that it’s likely you’ll forget about the similarities (To be honest, Will Ackerman is pretty great if you haven’t checked him out before). “Oh Moon” features similar cascading picking patterns to “Ambisinistrous,” unfortunately falling a bit short of the former’s spectral beauty.

“Odd West” is the kind of album you play late at night with all the lights turned off. It is music that will soundtrack your journey into sleep and back out again, like a dream you can’t quite remember. Was any of it real? The answer lies somewhere in between the cascading notes of Jason McMahon’s guitar.

Bad Wolves’ cover of “Zombie” takes on a rock edge and...