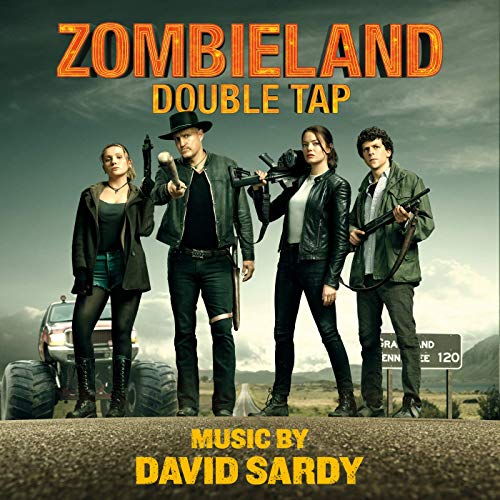 Welcome to another addition of Exploring Soundtracks. We’re still in the middle of our horror marathon for the winter this week. Although the film we’re looking at today isn’t strictly horror, but rather comedy that pokes fun at one of the most popular and overdone horror tropes of all time: zombies.

But before we get into David Sardy’s score, here’s a brief synopsis of “Zombieland: Double Tap” for anyone who hasn’t seen it yet, or just needs a quick refresher.

The old crew from “Zombieland” is back again, this time traveling across the zombie-infested wasteland to Memphis, TN. Along the way, they run into another crew of post-apocalyptic survivors who find shelter in a commune. Tallahassee, Columbus, Wichita, and Little Rock soon find themselves in a battle against smarter, faster, and stronger zombies than before. Once again, it’s a fight for survival, with more than a few witty zingers thrown in.

While David Sardy’s score does offer some good musical moments, probably the best one comes from one he had nothing to do with. Similarly to the opening credits of the first “Zombieland”, this sequel starts off with an appropriately metal song. This time, instead of “For Whom The Bell Tolls”, we get Metallica’s “Master of Puppets”. As expected, it’s paired up with an extended sequence of exquisite zombie executions.

For the most part, Sardy’s soundtrack stays in the background, and never really does much heavy lifting in carrying the tone. That job is given more to some of the other popular songs that made their way into the film. Other great ones include Lynyrd Skynyrd’s “Free Bird”, and the Caddyshack nod during the mid-credits scene, in which Bill Murray kills zombies to Kenny Loggins’ “I’m Alright”.

Nevertheless, the soundtrack still does a good job in connecting to each of the main characters’ aesthetics. For instance, in a lot of Tallahassee’s scenes the twanging of an acoustic guitar can be heard. Both “Call of the Buffalo Tallahassee’s Goodbye”, and “Tallahassee Returns” maintain Tallahassee’s rugged, cowboy vibe.

Finally, Elvis plays a somewhat major role in defining Tallahassee’s character in “Zombieland: Double Tap”. If you saw the first movie, Elvis is basically his new Twinkie. And while it’s not something that has anything to do with Sardy’s score, Woody Harrelson’s rendition of “Burning Love” over the end credits may just be the best way this movie could have ended.

Overall, it’s hard to say that “Zombieland: Double Tap” is a good movie. But luckily, we’re not judging the script, just the soundtrack. That being said,Sardy’s soundtrack doesn’t offer much to appreciate. For the most part, it’s pretty standard stuff. To be honest, the biggest highlights included the popular songs that were turned to full volume, rather than the many score snippets that faded into the background.

Even though Sardy’s score wasn’t the best soundtrack we’ve covered, there are still a lot of great musical moments to be found in “Zombieland: Double Tap”. And at the end of the day, that’s all that really matters.

That about does it for today. I hope you enjoyed our discussion of David Sardy’s original soundtrack to “Zombieland: Double Tap”. We’ll be back next week with a new soundtrack to explore.