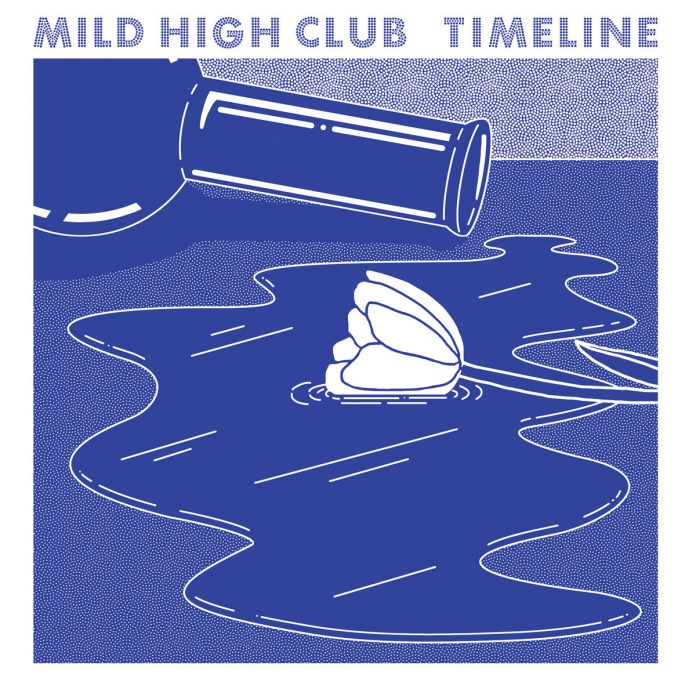 Back in 2015, the stoner-retro-soft-rock aesthetic was just gaining steam. Mac Demarco was, against all odds, gaining popularity and trotting around to late night shows with his goofy grin and saggy baseball caps. One look at his toothy smile and every 15-year old on the planet was hooked like they had just tried Busch light for the first time. I’d drive by the theater in Denver and see the whole local high school contingent waiting outside for the doors to open.

To be honest, at first I really didn’t get it. Then, like my mind’s eye-opening on a psychedelic journey through the cosmos, all of a sudden I did. I think that it was the title track on Mild High Club’s sophomore album “Skiptracing” that finally did it for me. The gentle Latin influence of the rhythm in the chorus and the misty sparkle of the guitar chords started to draw me into the world of Mild High Club. It was like a dream I didn’t want to wake up from.

Eventually I got completely sucked in. I found bands like Loving, Crumb, and Drugdealer, who were also siphoning the sounds of the past into a postmodern, extremely catchy new sound. I even started to like Mac Demarco, hating to admit that I now had lots in common with every hipster 15-year-old across the country. I now attribute this addiction to Mild High Club, the project of Alexander Brettin, who toured with Mac Demarco for a while.

Like a full-leaf tea, Mild High Club’s sound is steeped in the sounds of yesteryear:  Through their songs, one can sample the flavors of The Beatles, Steely Dan, and a host of other 60s and 70s music. But there is something a little strange about this tea. It’s like someone snuck in a few psychedelic mushrooms into the mix, and now everything sounds a little woozy and a degree removed from reality. That’s perfectly okay, though. Who doesn’t want to take a little sidestep out of this mad world that we live in?

Brettin describes him and his merry band of musicians by a term he’s coined: Tripsters. He has defined this as “a society of like-minded international players or a collective community of nerdy trippy kids.” Trippy pop would be a good identifier for the music, which is relaxed at its most energetic and like thick soup at its most lethargic. It’s appropriate that in recent years Brettin and his band have connected with Australian psychedelic band King Gizzard & the Lizard Wizard.

As part of the worldwide resurgence in psychedelia and washed-out musical haze, Brettin distinguishes himself as a talented songwriter. Beneath the drugged-out sleaze and copious effects, these are songs worthy of any 70s singer-songwriter effort. Owing as much to The Beatles as to Todd Rundgren, his songs are built on retro melodies and jazz chord changes. Once he’s built the songs, it sounds as if he’s deliberately slowed them down a few degrees.

“Windowpane” is the standout single from “Timeline.” The song contains what amounts to the group’s unofficial mantra. It’s a track that observes life from a placid viewpoint. Life isn’t something to be taken hold of or grabbed by the horns, but something to be observed as it flies by:

Passes on the right

Takes you for a ride

I just like to take a look for a while

It’s such a pretty picture”

For a band called “Mild High Club,” this isn’t a surprising viewpoint. As anyone knows who has tried marijuana (which is pretty much everyone at this point, right?), the drug removes us from reality a few degrees. We can easily become an engaged observer, someone that sees life pass us instead of being an active participant in its passing. Over a bouncy harpsichord and gently shuffling rhythm, it’s easy to be drawn into Mild High Club’s world, giving yourself over to their helpless exuberance.

There is also much to love about the song “You And Me,” which sounds like it was recorded in a faster speed, then slowed way down to a molasses drawl. The lyrics to the song are simple, with a few lines appearing through the song’s haze: “You and me / Got a thing, hopefully / You like / What you hear / Will you stop listening?”. Even pleading for a lover seems to land half-heartedly. Maybe this is the reason for the drugged-out world they live in, as the drug acts like a salve on the pain of relationships. The organ that breaks into the song feels like daylight after a long night of uncertainty, lending the track it’s only bright tones through the haze.

Other great tracks include “Undeniable,” which stomps along with a rising string of chords and a pleasant vocal warble that works well with Brettin’s falsetto. “Rollercoaster Baby” feels like a slightly off-kilter rock ‘n’ roll tune, one played by musicians who didn’t quite understand the genre. This also makes the song slightly endearing, like a strange, fantastical dream. “Elegy” is one of the more lucid tracks on “Timeline,” matching piano, organ, and acoustic guitar in a loose but perky arrangement: “I wanna be in your dreams / That’s all.”

Closer “The Chat,” featuring vocals by longtime retro crooner Ariel Pink, is probably the catchiest tune on the record. “Baby come back / You’ve got to act / And get online.” The singer is desperate to figure out his relationship with someone, which is why they want to have a conversation with them so badly. We all know what this chat will consist, though we usually don’t have it sound tracked by such a catchy tune.

“Have me a chat

It’s a moment of lucidity through the haze, which is layered on thick throughout “Timeline.” Underneath it all, though, is some fantastic songwriting. Based on this album and the even more impressive follow-up “Skiptracing,” Mild High Club has the potential to be one of the more interesting voices in modern-day pop.