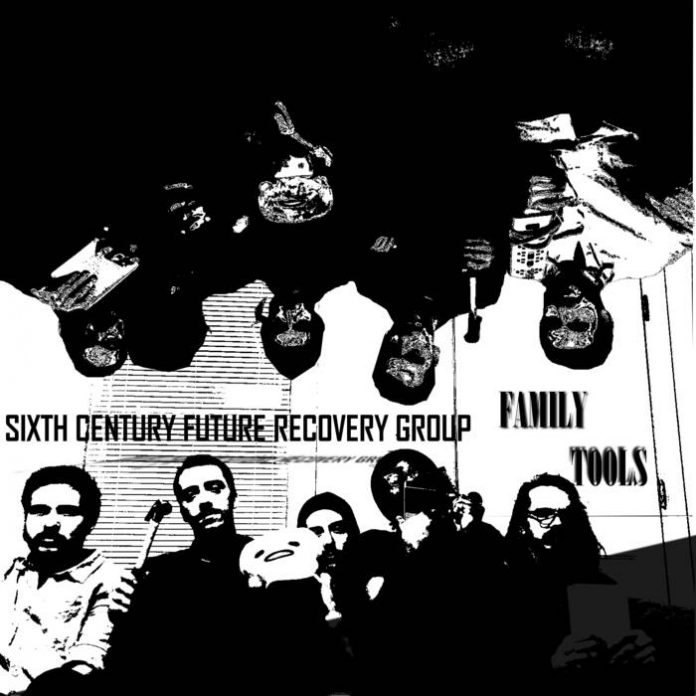 We’re not even a week into the new year, and already there’s some great music coming out of the Indy scene. Last week we spent our time looking back at some of the bands who made the past decade more enjoyable with their music. But starting today, we’re looking to the future. Any one of the bands we look at from here on out could be the next rising voice in Indianapolis. Could Sixth Century Future Recovery Group be one of them? We’ll find out by taking a look at their song, “Kung-Fu“.

But before we get into our song of the day, here’s a little information on Sixth Century Recovery Group, for anyone who either isn’t familiar with the band, or is just a little curious.

Zap Black and the Sixth Century Recovery Group is a six-piece experimental prog rock group from Indianapolis. They describe themselves as “an unsettling juxtaposition of composition, with the humanity of improvisation and instant composition”. As far as their approach to songwriting, they also state that, “we embrace the humanity in music as it helps us create and reach what we long for that cannot be put into words but can be enacted in the music setting”.

Sixth Century Future Recovery Group released their first EP, “Guernica” in 2017. The same year, they also released another digital album of a live recording, “Live at Mockin’bird Hill”. In 2018, they released the single “Coulture”, followed up the album of the same name that was released earlier last year. Sixth Century Future Recovery Group recently came out with their newest album, “Family Tools”, just a few days ago.

“Kung-Fu” is the third track on Sixth Century Recovery Group’s most recent album, “Family Tools”. It starts off with a syncopated drum beat quickly accompanied by a sax melody shared with Black’s vocals. At first, Black’s vocals are a bit jarring. His range is deeper than I was expecting, but not altogether unpleasant. The background vocals do a good job of balancing his tone.

Orban’s sax plays a vital role in carrying the song, and shines when it’s paired with other voices like the guitar or vocal melody, sometimes giving the secondary parts a little extra “oomph”. It’s this cohesion of instrumentation that smooths out the frequent transitions. Without it, “Kung-Fu” would seem a lot more disjointed. But thankfully that’s not the case.

One small critique that I have is that it’s a little difficult to make out what the lyrics are through Black’s vocals. Lyrics are one of my personal favorite things to deconstruct in a song, and it’s a little disappointing when the vocals are hard to make out. But that’s a small thing. And I’m sure, given additional listens, it becomes easier to understand Black’s intonation.

As far as the music goes, however, Sixth Century Future Recovery Group does a great job in keeping things interesting. Rather than stick on one progression and carry it throughout the song, they switch things up with multiple transitions, which makes for a good listening experience.

Overall, I think “Kung-Fu” is a very interesting song, but don’t know how often I’m likely to return to it. The instrumentation is great. The transitions are awesome. And the level of experimentation is impressive. But the overall sound may not be one that I come back to. That being said, you never know. And I like giving music second (and third) chances. So I’ll keep my ears open for more from Sixth Century Future Recovery Group.

The lonely encounter with the self: a review of Thom Yorke’s...