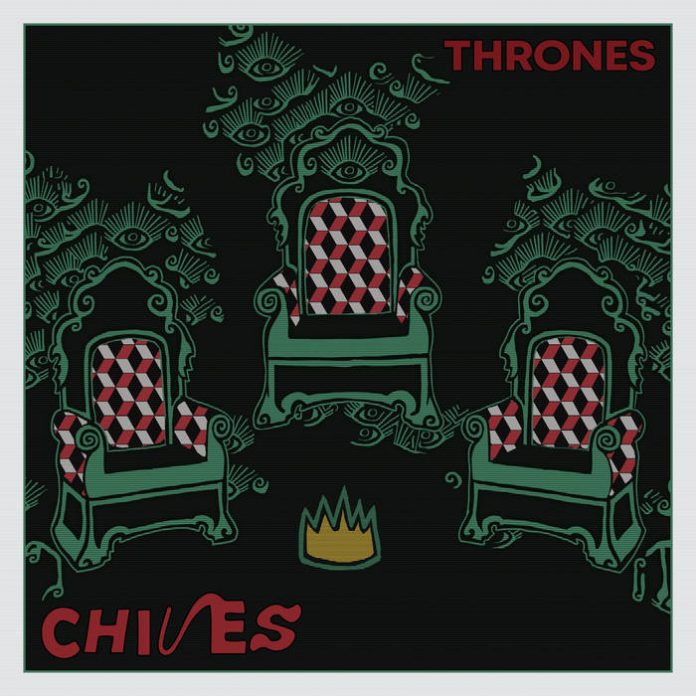 Local Indy band Chives brings out all of their frenetic energy in their delightfully weird, full-length debut album.

This week, we’re making a point to look back at some of the best music from local Indy bands of the decade. But we don’t want to get too bogged down in the older stuff. So, to be a little more future-oriented, we’ll be reviewing an album from this past year that marks the rising of a band that is sure to grow through the next decade. Admittedly, they’re a bit strange. But that’s okay. We like strange here.

But before we get into the album itself, here’s a quick look at the band behind it: Chives, for those who may be unfamiliar with the name.

Chives is a local Indy rock band led by guitarist, singer-songwriter, and frontman Ryan Perkins, whose wild, eclectic energy brings an intense voice to Chives’ combination of punk and psychedelic rock influences. It’s pretty safe to say that Chives could and would not exist without Perkins, who brings a stronger presence during their live performances than some full bands can manage.

If you only listen to one track from Chives, it quickly becomes clear that their target audience lies well outside the mainstream. They’re a band that isn’t afraid to make the music they want. And as a result, they’ve found a significant following that wants the same.

While their debut album just came out this past year, Chives has been making music in Indy for the better part of the decade. In 2015, they released their first single, “Drop N Roll”, along with their first EP, “Drip”. 2016 was a similar year for Chives, which saw the release of their second EP “Porcelain”, and the two singles, “Nightgown”, and “Katana”. 2017 brought a smaller release with Chives’ two track EP “Payasso”. After one year of no releases, Chives came back in 2019 to bring their first full-length album, “Thrones”. The album serves as a welcome gift to dedicated fans, as well as a solid introduction to new listeners.

“Thrones” consists of thirteen short but sweet tracks that for the most part run between just under two minutes, to just over three. The longest track on the album by far is the title track, “Thrones”, which hits a record for Chives at the five minute mark. While their sound definitely is more geared to shorter songs, there’s nothing wasted in this track. It’s actually amazing how well Chives can keep the same high energy consistent throughout a song that’s three minutes longer than their average. But it works.

One defining characteristic of nearly every song on “Thrones”, is the often unexpected and abrasive transitions. The effect is similar to what I imagine riding a roller coaster with a blindfold would feel like. That being said, it’s not at all unpleasant. On the contrary, it’s more of an exciting thrill ride all the more because of it.

One of the highlight tracks on “Thrones” is “Family Pearls”, in which we hear Chives practicing a more restrained sound. While it isn’t as driving as the other tracks, it serves an important role for the album, in that it gives listeners a chance to breathe and take a break from the almost relentless onslaught of erratic energy. It may not be the best song on the album, but just the fact that it exists makes “Thrones” a much easier listen.

Another highlight track on “Thrones” has to be “Pistol”, which also starts off with a lower energy than most of the other songs. At roughly three and a half minutes long, it’s another of the longest songs found on the album. But what’s especially great about “Pistol” is how it switches abruptly into double-time. In it, Chives smashes together their laid back sound with their high energy craziness, and “Pistol” is all the better because of it.

Overall, Chives’ “Thrones” will probably be a little disorienting on your first listen, unless of course you’re already familiar with Chives. On the second listen, however, you can begin to hear and appreciate the amount of experimentation and pure joy that must have gone into this album. If you like listening to bands that strive for their own sound over anything else, you should definitely give Chives’ “Thrones” a listen.

If you enjoyed this review, you can listen to all of Chives’ debut album “Thrones” by visiting them on Bandcamp. You can also find out more information on Chives by going to their Facebook page.

For more coverage on the Indy music scene, be sure to check out the LemonWire Music Corner, where we’re showcasing local Indianapolis artists.

Buena Vista Social Club Is Amazing, but Don’t Confuse It with...