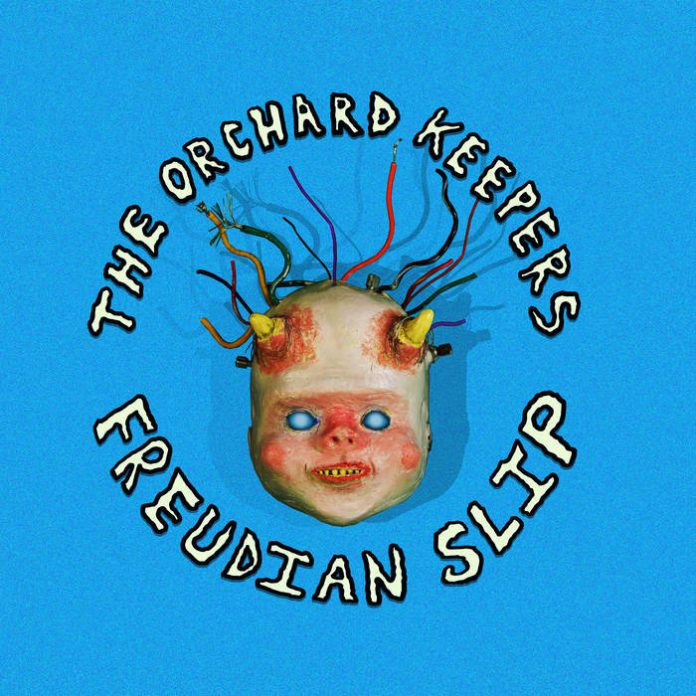 The Orchard Keepers’ 2018 EP “Freudian Slip”, plays out as a four act horror story that cranks up the disturbing and the weird.

Even though today is Christmas Eve, we don’t want to just add to the already oppressive flood of holiday-themed music out there. There should still be enough room in everyone’s holiday season for something a little bit out of the ordinary. And if The Orchard Keepers are anything, it’s out of the ordinary.

We’ve already talked a little bit about how winter is the best season for horror movies in our Exploring Soundtracks series. But what about horror music? The answer is yes. Horror music is also perfect for this time of year.

But before we get into “Freudian Slip”, here’s a little bit more information on the Orchard Keepers for anyone who hasn’t heard of them.

The Orchard Keepers are a three piece punk rock band from Indianapolis that’s been making a splash in the city for some time. They’ve headlined Punk Rock Night at the Melody Inn, sharing the bill with the Katatonics, Reuther, and Lousy Sue. The Orchard Keepers have also opened for bands like Thelma and the Sleaze, Skating Polly, and the Coathangers. Earlier this month, they played at the Melody Inn for Friday the 13th with Werewolf with a Shotgun, and Founders.

The trio’s backbone rests on the longtime collaborators, vocalist/guitarist Ayanna Miller and bassist Ella Roberts, whose shared appreciation for Cormac McCarthy led to them naming their group after one of his novels. Upon meeting up with drummer Nick Underwood, The Orchard Keepers were assembled.

“Freudian Slip” is a four track EP that plays out as a horror story told in four acts. The album opens with “Act I: It Goes Something Like This”, which serves as our introduction to the tale. The song is accompanied by a distorted guitar and the sound of a crackling fire as Miller puts on the voice of an old woman and begins to tell the tale of a woman who gets locked in an institution by her father. After she promises that, “this story has a very happy ending”, Miller lets out a cackle and the band launches into a bouncy jaunt. What follows is like something out of Pink Floyd’s “The Wall”, except less melancholic and more disturbing.

In “Act II: In The End”, the woman (named Mary) gives birth to some demonic, robotic baby. The inspiration from Rosemary’s Baby is pretty clear, but The Orchard Keepers take it a step further by acting out all the horror and pain. In “Act II: Mary Gets Her Sweet Revenge”, she returns to her father’s house and watches as her newborn, monster son kills him, laughing all the while. The attention to detail here is great, complete with the father’s screams, the baby’s giggling, and Mary’s laughter.

The EP ends with the short “Act IV: “And Gives Her Baby Boy a Kiss”, which brings back the melody from the beginning, along with the crackling fire. In the end, the woman reveals herself to be Mary, and says, “See, I told you this story had a happy ending”, and falls into another cackle. The track then ends with sounds of screaming, followed by a child’s laugh.

Overall, “Freudian Slip” succeeded in creeping the hell out of me. So as a horror story, it’s definitely worth listening to. And, as an EP, “Freudian Slip” also succeeds in pairing its horror story with some appropriately jarring music. I can say for sure that I haven’t heard anything like it before. And for that, it gets two big thumbs up.