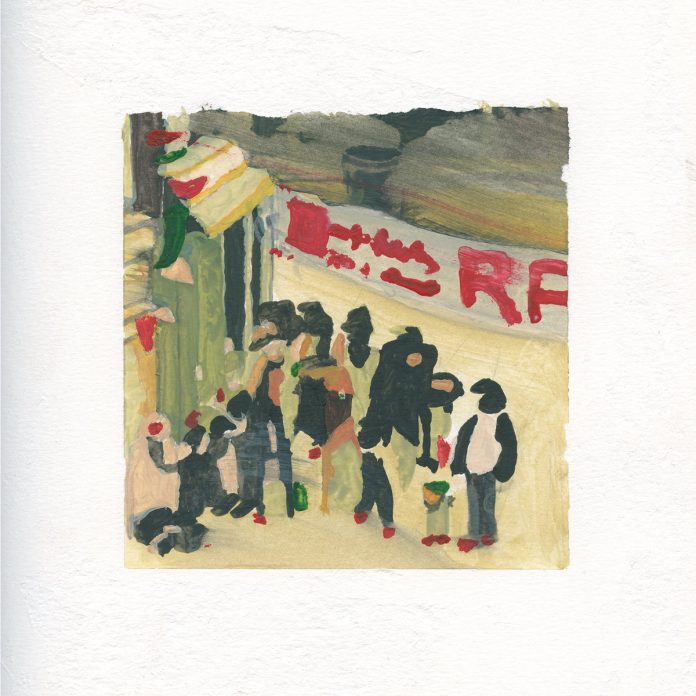 Twain’s new album “Adventure” begins with “Inner Beauty,” a slow-burning piano tune that throbs along like the haunting tremble of a quiet afternoon. “Sitting at the bar / Or an old café / And the waitress smiles / And my heart sings.” The song is Twain’s ode to finding deeper levels of meaning in the world. It aims to uplift the simple things with a submissive and open-hearted wonder that is both exuberantly honest and exquisitely tender. Meanwhile, the song builds so slowly you probably won’t even notice its cornucopia of elements easing in, like the sizzling crash of cymbals or the quiver of synthetic tones.

The slow burn concedes to a bouncy guitar rhythm on “Working,” the second track. The song is more classically in Twain’s style, pivoting off the jingle and jangle of his guitar rhythms to create an atmosphere of wandering anticipation.

Twain’s music often digs into the space in between pastoral folk and dark balladry. “Adventure” slips more towards the latter. His chord progressions are less upbeat here, and generally less traditionally folky. In fact, some of his piano work on the album is more indebted to compositional pioneers like Erik Satie than any folk piano stylist you can think of.

“I was just working on my life / I’ve got to get it right.” These lines highlight the ruminative and reflective nature of Twain’s music. The album has the feel of a mirror held up by the artist in front of myself. If this record was a soundtrack, it would probably fit into a movie about a solo traveler wandering the American heartland in winter, or some Lynchian derivative where characters shapeshift into each other as they experience the world. The song serves as a meditation on change and intention and being itself, themes that move across “Adventure” like the wild course of a river.

“Royal Road” intersects with this search for selfhood. While “Working” aims to define exactly what dreams are and how they move us, “Royal Road” explores concepts of gender and identity: “Do your think your mind is but a lady? Do you think your mind is a man?” In a way, the song reaches deep into childhood, in those times before we understood gender and what the roles were that would soon be defined for us. “Royal Road” strips away all those barriers: “Call us gay, straight, bi, call us what you’d like / I call it all Romance.”

“Adventure” is full of tape hiss and pockets of silence. It’s anti-pop and in sharp contrast to the sound-ceiling aesthetics of most radio hits these days. It’s even quieter than Twain’s previous releases such as the “New Miami Sound E.P.” released earlier this year or the folk-pop masterpiece “Rare Feeling” he put out in 2017.

Though some listeners might find the pockets of silence unnerving, there is a raw beauty to “Adventure” that separates it from the rest of Twain’s work. It’s as if the artist is intentionally stripping away all the extraneous outer layers of both his sound and his message, trying to somehow find what the essence of it all is. This album is truly an inner adventure, a journey through the ideas and concepts and assumptions that make up a person.

Twain digs deeper into these ideas on “Searching.” “I don’t want to get over it,” he sings, speaking about a woman that he once was and is now searching for. The song somehow touches on the longing for love and the possibility of being different people in the past in a few hushed lines. This interweaves with Twain’s general themes of the ambiguous nature and the self and the shifting relationship we all have to life and each other. “Who can bring her back / Lost soul woman of my hidden past.”

The album’s songs suffer a bit from weaker arrangements than on Twain’s previous work. There aren’t any standouts like “Solar Pilgrim” or “Hank & Georgia” on “Adventure.’ Although the songs are altogether less memorable, the subject matter still shines, even if in more subtle tones. The lyrical rhythm of “In the High of the Morning,” flows as gently and serenely as a mountain stream emerging from the green slopes of summer mountains: “It’s my duty to love life / Not try and know life / To show it, to show I don’t know / Yet I know that it’s real.”

The songs that Twain presents on “Adventure” require more patience from the listener. This is an album that slowly reveals itself to you, one that consists of many layers of lyrical exposition and subtle musical movements. With each listen “Adventure” gains a sense of richness, delving deeper into the ideas and hopes and dreams that make up each one of us.

“Star Mate” is about using music to describe just exactly your “self” is and understand what that means in relationship to the world and others.

Some beautiful harmonies and spectral synthesizers accompany Twain’s voice here, adding weight and color to his exhortations. The “Star Mate” in the song could be a love partner, or that critical piece of himself that Twain is missing. He exhorts them to “hold on” for that bright day when union is realized. It’s possible it doesn’t matter what he’s referring to. Ideas of self and other aren’t mutually exclusive on “Adventure,” a true journey into being alive and understanding what that means.

Bumpin’ Uglies and The One Drops play The Mousetrap