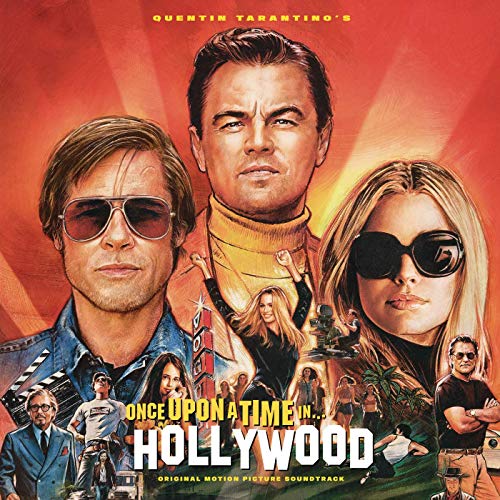 The soundtrack to Quentin Tarantino’s ninth film features a double vinyl collection of songs from the ’60s, as well as some original radio ads from the time.

It’s been awhile since we’ve covered the soundtrack to one of Quentin Tarantino’s films, but we’re finally here with a new one. As always, Tarantino’s care and attention to the music in his films is not lost in the soundtrack. This massive collection of songs from the ’60s matches up well with the nearly three hour run time of the film, and also includes that extra level of detail with the addition of original advertisements for products like Mug Root Beer and Tanya Tanning Butter.

But before we get into the soundtrack itself, here’s a brief synopsis of “Once Upon A Time In Hollywood”, for anyone who hasn’t seen it, or just needs a quick refresher (spoilers ahead).

“Once Upon A Time In Hollywood” follows the story of washed up actor Rick Dalton (Leonardo DiCaprio) struggling to find work in a Hollywood he doesn’t recognize anymore. He spends most of his time with his best friend and stunt double Cliff Booth (Brad Pitt), and lives next to Roman Polanski and Sharon Tate, the filmmaker and actress whose lives would be changed forever by the Manson family.

Once Upon A Time In Hollywood

In true Tarantino style, the first song in “Once Upon A Time In Hollywood” starts as Rick Dalton starts up his car. Over the opening credits, Roy Head & The Traits’ “Treat Her Right” sets the ’60s tone as we’re introduced to our cast of characters.

There are a lot of great, little musical moments sprinkled throughout “Once Upon A Time In Hollywood”, and a lot of them only last for the briefest of scenes. When juxtaposed alongside the ad spots, it gives the impression of someone flicking through channels on the radio, pausing for a moment on something good, and then switching it again. In terms of immersion, the combination of original advertisements and iconic ’60s songs succeeds in solidifying the illusion of a golden era in film making.

One of the longer musical spots comes as we get our first scene with Roman Polanski and Sharon Tate. When they leave their house for a party, “Hush” by Deep Purple” plays on their car’s radio, setting the tone for the drive through the California hills. It’s followed up by the Buchanan Brothers’ “Son of a Lovin’ Man”, which plays throughout the party.

Since a good bit of “Once Upon A Time In Hollywood” takes place on the film set of a spaghetti western, the song choice of “Dinamite Jim” is particularly appropriate, as it comes from a movie by the same name made in 1966. The track plays when Rick Dalton lands a role on a film called, “Nebraska Jim”. It’s just one of the many little winks that Tarantino gives to other lovers of that era of film.

Overall, the soundtrack to “Once Upon A Time In Hollywood” has the effect of transporting you back to 1969. Each song pairs up well with its accompanying scene, and the addition of the KHJ advertisements help to secure the illusion of this period film. The highlight track for the soundtrack has to be “You Keep Me Hangin’ On” by Vanilla Fudge, which comes in during the climactic, penultimate scene, and really makes the action on screen come alive.

That about does it for us today. I hope you enjoyed our discussion of Quentin Tarantino’s soundtrack to “Once Upon A Time In Hollywood”. We’ll be back next week with another soundtrack to explore.