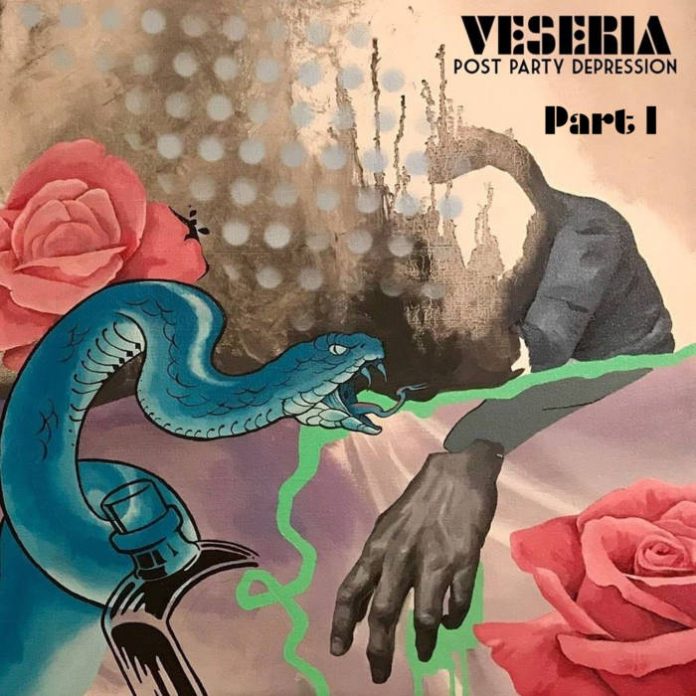 Local Indianapolis band Veseria released the first part of their double EP project, “Post Party Depression” last year. While we wait for the second part to come out, it’s time to take a closer look at the first.

If you’ve been following our Song of the Day articles, you’ll have noticed that lately we’ve been on a bit of a local kick. Truth be told, Indianapolis is one of those cities with far more talent in it than there is time to explore. Unfortunately, we can’t cover every single local artist in the city. But we can sure as hell try to get to as many as possible.

Veseria is one of Indy’s more unique bands. They’re a group who knows exactly what sound they’re going for, and aren’t afraid to stand out from the crowd. So before we get into our review of “Post Party Depression: Part 1”, here’s a little more information on Veseria.

Veseria is a five-piece rock band from Indianapolis that got their start in 2010. Musically, their style consists of songs that mainly blend together the genres of folk, classic rock, punk, and blues. While their cornucopia of influences has the potential to erupt into a clamoring of randomness, Veseria manages to combine these disparate threads together to create their own unique tapestry of sound.

Since they first began releasing their own music, Veseria has maintained a consistent yearly output. In 2014, Veseria released their debut album “Voyager”, followed up by their first EP, “Songs of War” in 2015. The next year saw them working with another local Indy band, Brother O’ Brother, on split vinyl. Veseria’s second full length album, “RLTVTY”, was released in 2017, as well as a live performance from Indy’s Hi-Fi.

Veseria’s most recent release is the 2018 EP “Post Party Depression: Part 1”, with part two and another vinyl on the way.

“Post Party Depression: Part 1” is a four track EP that is as diverse as Veseria’s influences. It opens with the strong intro track, “Bite the Hand”, which catapults the rest of the EP forward with intoxicating energy and powerful vocals by Jen Roberts. The main influences that come out in this track are punk, rock, and a little bit of reggae.

The energy comes down just slightly for “Robotics”, a driving track that swings between low energy, groovy verses, and an incredibly catchy and riff-driven chorus. While it begins with less energy than “Bite the Hand”, “Robotics” gradually builds thanks in large part to Perkon’s drums. Seriously, though, that chorus gets me every time.

The second half of the EP continues to slow things down with “Do What Thou Wilt”, a track that takes a lot of inspiration from classic rock and blues, but executed in Veseria’s unique style. It’s more of a riff-driven track, and the only track on the EP with lead vocals by Patrick Roberts.

The final track on the “Post Party Depression: Part 1” EP is “Oh, Emily”. This one carries with it even more classic rock influences than “Do What Thou Wilt”. You can hear it mostly in the tone of the guitars, as well as the general chord progression. But, characteristic of Veseria, they put their own stamp on it, as the song evolves and builds with an extended trumpet solo, bringing the EP to a triumphant and climactic end.

Overall, Veseria’s “Post Party Depression: Part 1” is a solid example of Veseria’s skill at carefully crafting songs that both pay tribute to their influences, as well as express their own, singular voice as a band. If you ask me, there are a lot of bands out there who could learn a thing or two from Veseria. Indianapolis is lucky to have them.

Speaking of Indianapolis, Veseria will be giving back to the community this weekend at Square Cat Vinyl for Record Store Day. The band will be giving away free copies of their “Songs of War” vinyl. So make sure to get out there and not miss out.

If you liked this review, you can hear the rest of “Post Party Depression: Part 1” on Bandcamp. For more information on Veseria, you can find them on Facebook.

Finally, if you’re looking for more coverage on the Indy music scene, be sure to check out the LemonWire Music Corner, where we’re bringing in local Indianapolis artists and showcasing their talents.

Tobin Mueller incorporates literature and music on “The Space Between Chaos...