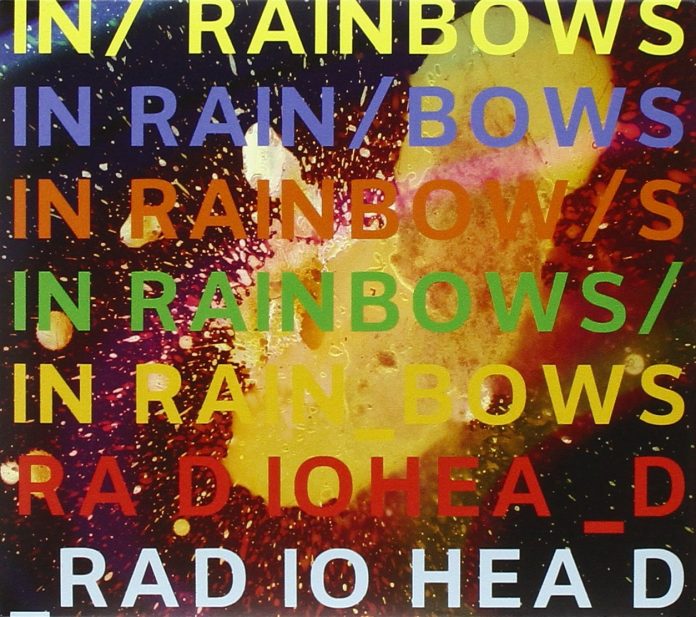 In Rainbows was a landmark album for Radiohead in many ways. Like they had accomplished with OK Computer nearly a decade before, the band had successfully redefined their sound, now transforming themselves into a combination of intricate krautrock and soulful psychedelia, all stretched out on mesmerizing song arrangements.

For a band that has always been a critical darling, the chameleon ways of Radiohead might be perceived as risky. But that’s also part of what makes the British band so great. Radiohead hasn’t always just been pushing against the edge of music experimentation, but have been there teetering on the precipice of what it means to be Radiohead, make music, or just exist in this modern world in which we live.

“In Rainbows” was released in 2007 after a four-year break for the band. The album was put out in a pay-what-you-can format without a label, a bold move that cemented their reputation as forward-thinkers not just in music but in marketing and distribution. Rumor has it that the band was quick to get a million downloads, demonstrating the power of internet music distribution in a pre-streaming age and showing the major labels that a band like Radiohead didn’t even need them.

“House of Cards” is remarkably upfront for a Radiohead song. Its first line is more reminiscent of an R&B ballad than a krautrock-influenced rock song: “I don’t want to be your friend / I just wanna be your lover / No matter how it ends / No matter how it starts.” What sells it is Thom Yorke’s delivery, which feels like more of what makes it a Radiohead song than the actual subject matter. This is the same-old love and angst fodder every song has been feeding us from the beginning of time, after all. With Yorke, it’s more than that. It’s pure, unfiltered desire, without a trace of irony. It’s also the way that Greenwood’s guitar plays off the melody through the lines “Fall off the table / Get swept under / Denial, denial” or the way that each part of the arrangement seems to interlock like a meticulously crafted puzzle.

This makes it strangely appropriate that one of the tracks on “In Rainbows” is called “Jigsaw Falling Into Place.” It’s not surprising that such a meticulously practiced and well-thought-out band such as Radiohead would demonstrate metaphorical consistencies in their sound and lyrical content. After all, these are the same guys who gave us those morphine-drip ballads “No Surprises” and “High and Dry” all those years ago, exercises in the outsider melancholia and social awareness of a band just starting to tap into their potential.

Radiohead, even when they’re playing the same old songwriting game we all are, still manage to separate their songs from the rest of the crowd. Radiohead’s compositions have an extra edge, an additional layer of mystery and esoteric knowledge that seems to hide somewhere deep below their mixes. Maybe it’s the way that Yorke’s high vibrato ripples into the echoing jangle of the guitars. Or perhaps its the inspired drumming of Philip Selway, who seems to effortlessly blend bossa nova, jazz, and Latin elements into so many Radiohead tracks. Whatever the secret is, the proof is in the pudding.

“Reckoner” begins with a samba-tinged beat that jangles the senses. Eventually the rhythmic parts retreat into the song, which features some of Yorke’s most spectral and beautiful singing ever. As he croons on separation and togetherness, you can’t help but feel the soaring lucidity of it all. “Nude” is one of the most beautiful songs that Radiohead has ever recorded. Yorke’s spectral melody on the line “Don’t get any big ideas / They’re not gonna happen.” The vocal ascension at the end of the track is exalting and translucent, and makes you want to close your eyes and let go of it all.

“When I’m at the pearly gates / This will be on my videotape, my videotape / Mephistopheles is just beneath / And he’s reaching up to grab me.” This song – “Videotape” – has become a classic in the Radiohead canon. Yorke’s piano veers slightly off the expected quarter note beat of the song, allowing the drums and piano line to form a slightly jagged and ultimately jarring exchange, leading into Yorke’s words “Today has been the most perfect day I’ve ever seen.” The song builds, forms itself again, then recedes into the still waters of the night.

If you haven’t listened to “In Rainbows” in a while, then it’s probably time for another listen. This one was a turning point for one of the greatest bands of the modern era, and a testament to where musicianship can take a band.

Thomas Rhett and Maren Morris Team Up for “Craving You” Video