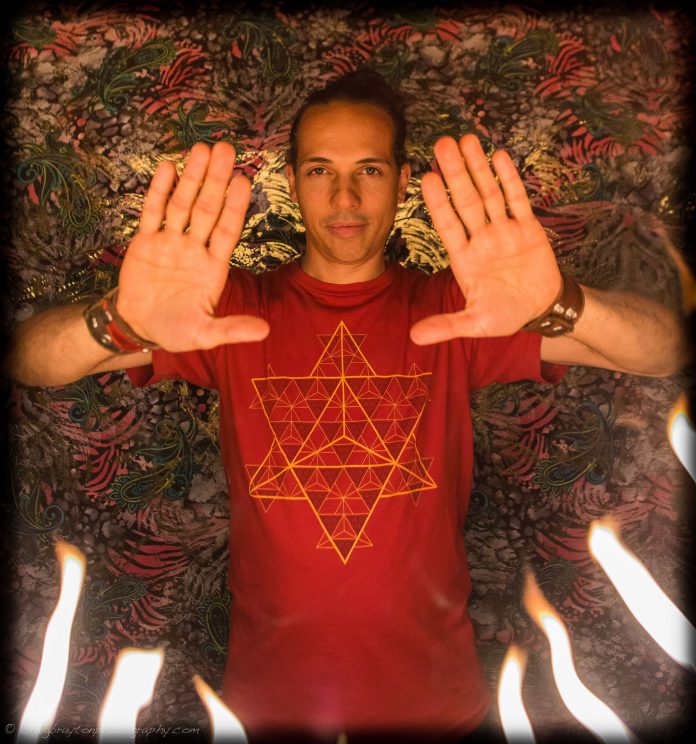 David Starfire reveals his thoughts on virtual reality, advice for new musicians, and his next projects.

Our interview with David Starfire was just too good to keep to a single article. Here’s the rest of our conversation with the proclaimed Global Bass pioneer.

LemonWire: You’ve been a part of several VR projects like the Galactic Gallery and the Electronauts VR game. How do you think VR changes the way people interact with your music as opposed to a live show or festival?

David Starfire: Interesting question. They are such different mediums. I think at live shows there’s kind of this reciprocal kind of energy involved. The crowd is feeding off the crowd and me, and I’m feeding off of the crowd. With either VR or listening to recordings, it’s more of a personal connection with the person at that time, interacting with a CD or mp3, Spotify, or VR, I think that people can tune in more to the music and tune more into themselves. I want people to basically journey and to escape from whatever’s going on in their lives by listening to the music, and to help them heal. I have a sound healing project and album that I’m working on as well. So my takeaway is, from all this is that at live concerts, dancing at clubs, or just at home listening on earbuds on a couch, just escape whatever’s going on in your life and reset.

LW: Is there any advice that you’ve gotten about the music industry that has stayed with you?

DS: Basically, as far as an artist, you have to put in 200%. You have to put everything, every ounce of energy, into your art, whether that’s painting, music, dancing, whatever. You’ve got to put all the eggs in one basket. You’ve got to be fully into it and fully engaged. And you just can’t stop. Sometimes it takes a long time to own your craft and to create something interesting and exciting that people really like. You just have to be patient and put everything into it and over time, you will be successful.

LW: You mentioned earlier that you’re working on a sound healing album. Is that your main focus right now?

DS: No, it’s definitely a side project. David Starfire is definitely always the main focus because it takes a lot of time and energy. The sound healing album has been taking quite a long time, much longer than anticipated but I had to do a lot of research, and I want it done right. It’s an album that is centered around the seven chakras that will also be an app and eventually a VR experience. I have a side project called the Dub Kirtan All-Stars, with FreQ Nasty. The concept of the project is to combine Kirtan (mantra chants, from temples of India, chants to different deities) which are beautiful chants in Sanskrit mixed with bass music. The project is very much a vocal project and sometimes it’s a live band with up to 15 people on stage with us before, and sometimes it’s just a DJ set with myself and FreQ Nasty. We have a new single coming out with one of the top Kirtan singers named Jai Uttal and we have an EP coming out early next year. It’s a project that’s been around for 7 years.

LW: What’s the best way for other people to find out more information about you and your music?

DS: The best way is probably from my website, DavidStarfire.com. For social media, you can search for David Starfire and I’m easy to find.

For more interviews with artists, be sure to check out the LemonWire Music Corner, where we’re showcasing local Indianapolis talent.

A dive into Lawrence English’s ambient manifesto and a review of...