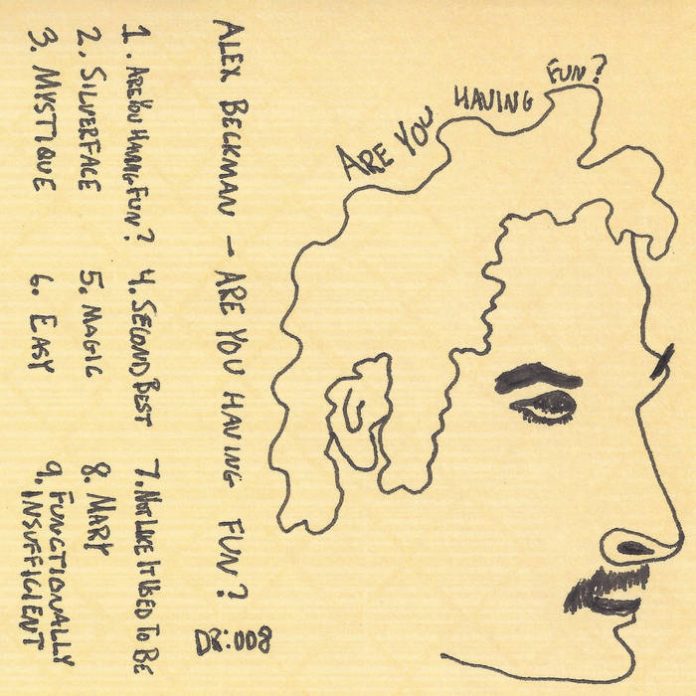 Local Indy songwriter Alex Beckman’s recent album, “Are You Having Fun?” is full of some great tracks with a simultaneously fresh and nostalgic sound. Our song of the day today, “Second Best”, is one of those.

This week, we’re continuing our search for local Indianapolis artists who stand out from the crowd. There’s so much musical talent and skill in our community that goes unnoticed, and we want to change that. Yesterday, we listened to the psychedelic, rock fusion of Porch Kat, who are making a name for themselves as a formidable jam band. We’re switching it up today with solo artist Alex Beckman. His music is mostly indie rock, with a little bit of grunge and a little bit of punk thrown in there.

But before we get into “Second Best”, let’s first learn a little about the local Indy artist who made it.

Alex Beckman is a solo singer-songwriter based in Indianapolis, who’s been putting out music in a steady stream for the past two years or so. His debut release, “The Eternal Struggle of a Lost Mind” came out February 2017. Since then, Beckman has continued to put out regular EPs and singles, as well as two digital albums, “Thank You For That Beautiful Moon” and “A House Where No One’s Home” in 2018.

Beckman’s most recent digital album, “Are You Having Fun?” was released this September. As an album, its energy levels vary from song to song. At first glance, some might see this as a sign of inexperience. But the placement of songs is entirely intentional. When listened all the way through, it becomes clear that Beckman has an inexplicable ability to pull you into his mind and emotions. For a relatively new artist, that’s a trait that shouldn’t go unnoticed.

Alex Beckman’s latest release is the single, “Solomon”, which came out this month.

Of all the songs on “Are You Having Fun?”, “Second Best” definitely has the highest energy level. It’s easy to hear the influences of grunge bands like Nirvana in both the chorus and verses. The song is structured much the same way many Pixies and Nirvana songs are, with low energy verses and a distorted, explosive chorus.

While its structure may not be as innovative or original as some of the other tracks on “Are you Having Fun?”, its inclusion in the album alone is enough to make this track stand out. Sandwiched between two lower energy tracks, “Second Best” comes in like a breath of fresh air. The angst and tension it brings to the album carries over in each successive track. It lingers just below the surface, as if after being introduced, it could pop back up without notice.

The lyrics to “Second Best” mirror the direction and tone of the music throughout the song, with a major theme of sexuality running through it.

The chorus introduces some equally ambiguous language, that could either refer to sexually activity, or possibly drug use. “Huff in / Breath out / Come down / It’s a liberating sound”.

The final verse seems to be where the meat of the song’s meaning comes through. In it, Beckman wrestles with labels and a healthy rebellion against societal expectations.

“Sexually vague with no mistakes,
Don’t box me up that way,
It’s okay to not know anyway
Feels unclear
So utterly queer
You don’t gotta adhere
To a constructed image of fear”

In a final and climactic act of defiance, Beckman half screams and half mutters the song’s final words: “I’m outstanding”.

Alex Beckman’s “Second Best” is an absolute joy to listen to. After hearing it, it’s a real challenge to not go through and listen to the rest of “Are You Having Fun?”. You can find and listen to more of Alex Beckman by visiting Bandcamp.

If you’re a resident of Indianapolis who complains about the city’s lack of a strong music scene, you obviously haven’t been looking hard enough. But that’s fine. Here at LemonWire, we do the hard work of searching for you, so you can just sit back and listen.

If you want to see more coverage on local Indianapolis music, be sure to check out the LemonWire Music Corner, where we’re showcasing popular and emerging artists every week.

AP Was There: Navratilova tops Evert for 1st Slam title