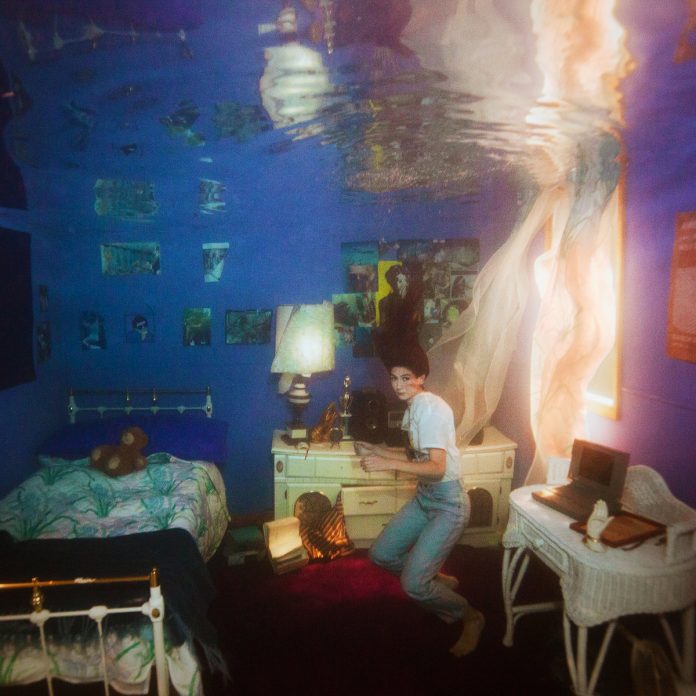 The album opens with a queasy synth, a sound that seems to be oozing out of a VHS tape that’s been cooking in your parent’s shag carpeted den for decades now. Maybe it’s a holiday special that you watched every Christmas as a honey baked ham baked in the oven, or an obscure sci-fi film with questionable set design that somehow became a family favorite. It doesn’t seem to matter though, because for all of us it’s a slightly different thing. It’s those things that reflect that world we’ve left behind: the world of childhood and innocence knocking at the back door of our brains and asking to come in and play.

“If I could go back to a time before now / Before ever I fell down / Go back to a time when I was just a girl / When I had the whole world gently wrapped around me” Weyes Blood sings on the first track of her new album, “Titanic Rising.” Through the track, called “A Lot’s Gonna Change,” Natalie Mering, aka Weyes Blood, is summoning up that eternally comforting feeling that youth represents. At the same time she reminisces, though, she seems to realize that it’s hopeless to think you can go back to that state of mind. She never says what she would “if” she could go back, as if she realized that the only way out is forward.

The chorus comes to reaffirm that sentiment: “A lot’s gonna change in your lifetime / Try to leave it all behind in your lifetime.” Mering is ready to accept the loneliness and isolation that comes with being an adult. That acceptance, though scary, can also be freeing for the artistic mind. This feeling shows on “Titanic Rising.”

What this means: As much as this album reaches back, it also stretches its hands forward, trying to encapsulate the grandeur of time alongside the momentary flashes of love that often leave us shipwrecked along the life paths we thought we wanted to follow. Though it dwells in these places of illusion and pain, it isn’t shackled to them.

On “Andromeda,” the album continues to be a collision of Natalie Mering’s soaring, beautiful voice and the shaky oscillation of synth. The production here is immaculate save the appearance and reappearance of those range of synth sounds, which stand out even more against the hi-fidelity Laurel Canyon folk rock world she has built on “Titanic Rising.” The album, thus, feels part Carole King (“Everyday”) throwback and part space opera (“Movies”).

“Everyday” is the unabashed pop hit here, and should entertain just about anyone who stumbles upon this record. The song effortlessly echoes the great 70s chord progressions, which sound right at home bathed in Mering’s vocals: “Sailing off on the ships to nowhere / Got a lot of things to clear away / Got a lot of years of bad love to make ok”. Eventually the cute verse lyrics give way to a chorus both big and beautiful. It recycles some retro backup vocals (which are definitely not in fashion in pop music today) to create a gargantuan sound, one in which her voice really takes off into the stratosphere.

“Everyday” is revelatory song crafting, and Mering bathes in all its melodic ecstasy. The track functions as the centerpiece of the album, and through it she delivers with one of her finest songwriting efforts to date.

By the time we get to the chorus, the line “I need a love everyday,” bursts through like a shot of pure pop realization, finding Mering both vulnerable and empowered in the same exhalation. It also shows how stealthily she handles the format, sprinkling in clever statements: “True love is making a comeback”; anecdotal bits of conversation: “The other night I was at a party / And someone sitting silly looked at me / And said, “Is this the end of all the love in me?”; and some heart-on-the-sleeve confessions: “I’m so scared of being alone / It’s true, it’s true.” The big crescendo ending and spooky ambience at the end just serve to remind us that behind every cute pop song there lurks a bit of darkness (also see the video for “Everyday”).

None of this is surprising for an artist that cites Harry Nilsson as an influence. Nilsson practically wrote the book for clever pop lyricists with a penchant for old-time musical styles (in his case it was Tin-Pan Alley songs and swing/jazz moods).

Mering, on the other hand, has made her name reviving 60s and 70s stylistic approaches to music, both in her songwriting and through collaborations with artists such as Ariel Pink and Drugdealer. Her voice, spilling out like a darker, more melancholy Karen Carpenter, is perfectly suited for the job. Mering doesn’t lose a second demonstrating it, either. “Titanic Rising” offers a rich helping of her operatic ascendancy into the nether regions of strong choruses, with a side serving of subtle vocal work, like that irresistible set of “oohs” at the end of the word “Believe” in “Something to Believe.”

Slowly the themes of love and isolation and fantasy coalesce together into something tangible. Loneliness is a feeling familiar to Mering, who lived in New York for a time before relocating to her current home of Los Angeles. “I was in New York alone: no friends, no money, no record deal at the time. Literally I had nothing.” She told Urban Outfitters in 2019.

The title track itself is an ambient interlude, one that seems designed to mesmerize the listener as much as ease the transition between tracks. It also sets the stage for “Movies,” one of “Titanic Rising’s” most enchanting tracks.

Put me in a movie and everyone will know me / You’ll be the star you know you are /The movies I watched when I was a kid / The hopes and the dreams /Don’t give credit to the real things / I love the movies.” These lyrics just about sum up “Titanic Rising.” Those fantasies and illusions of love have no better champion than the world of movies, which lift our hearts up into those places where our hopes and dreams live.

Mering, like any movie lover (I am too) knows the heartache when life doesn’t hold up to the silver screen. We all want to be stars of our own movies, where there is a magically delicious plot waiting just for us. Part of “Titanic Rising’ is accepting that life and love in real life don’t always make as much sense.

Five atmospheric albums for the fall