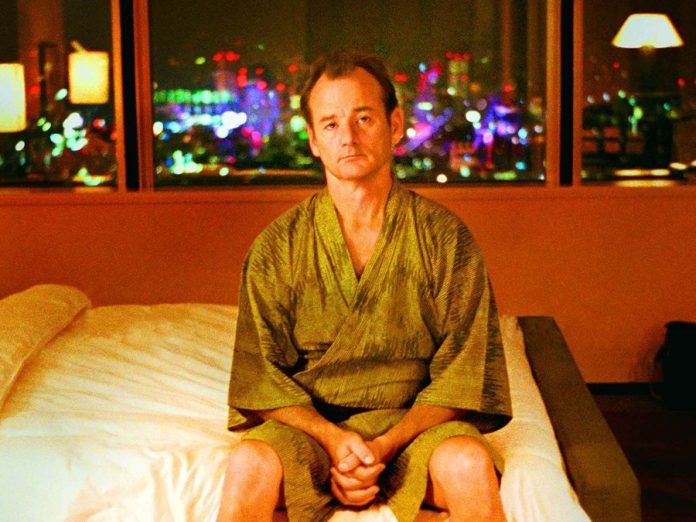 The soundtrack to Sofia Coppola’s “Lost in Translation” consists of a shimmering mass of dream pop and shoe gaze vibes that appropriately match the film’s tone and serves as a character in and of itself.

For the past few weeks, we’ve been bouncing around quite a bit in terms of the types of films and soundtracks we’ve looked at. Last week, we checked out the soundtrack to “Spider-Man: Far From Home”, and the original soundtrack by Michael Giacchino. But before that, we looked at the soundtrack to Sofia Coppola’s “The Virgin Suicides”. This week, we’re getting back on track by following up with another film by Sofia Coppola.

But before we start talking about the soundtrack itself, here’s a quick synopsis of “Lost in Translation” for those who haven’t seen it, or just need a quick refresher.

“Lost in Translation” follows the story of lonely, aging movie star Bob Harris (Bill Murray) and struggling newlywed Charlotte (Scarlet Johansson), whose lives become intertwined when they meet in Tokyo. Charlotte is accompanying her husband who photographs celebrities, while Bob is filming a Japanese whiskey commercial. The two unlikely friends form a bond after a chance meeting, and find comfort, distraction, and community together as two strangers in a foreign land.

The “Lost in Translation” soundtrack was supervised by Brian Reitzell, and contains several songs by Kevin Shields as well as one from his group, My Bloody Valentine.

From the opening scene, the music immediately sets the dreamy tone in “Lost in Translation”. As we follow Bill Murray’s character driving through downtown Tokyo, the ethereal vocals and lo-fi esque atmosphere create an almost childlike sense of wonder that matches that of his character as he gazes up at the new foreign city he finds himself in.

As a long-time Phoenix fan, I was pleased to hear their song, “Too Young” snuck in during a late night partying scene. The lyrics in it connect somewhat with Bill Murray’s character and his mid-life crisis, especially the lines, “I can’t lie on my bed without thinking I was wrong / But when this feeling calls this world becomes another” and “I feel too young”. And while it doesn’t have much to do with the themes in the film, it was still nice that it was included, and grounded in a character’s emotion at the same time.

The tracks in the “Lost in Translation” soundtrack flow well together, with little inconsistency in tone. Overall, the senses of wanderlust, longing, and dreaminess that come through the soundtrack are perfectly paired with the story of two strangers trying to make sense of their situations, each other, and life itself. This comes through a little more clearly when listening to the soundtrack by itself, rather than while watching. The film has a lot of of space without any music playing whatsoever, which would make it punch all the harder when it comes, except that instead it comes off more like a soft, slow embrace.

That about does it for our discussion of the soundtrack to “Lost in Translation”. We’ll be back next week with another soundtrack