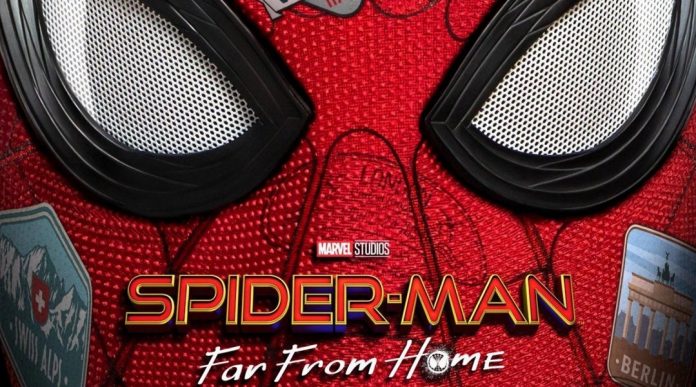 The soundtrack to the second MCU Spider-Man film brings the sounds of AC/DC, The Ramones, Whitney Houston, as well as a complete score by Michael Giacchino.

Today in Exploring Soundtracks, we’ll be looking at the latest Marvel film to come out of the Marvel Cinematic Universe. And as a bonus, it just so happens to star everyone’s favorite webslinger. The last Spider-Man film to come out of the MCU also boasted a pretty stellar soundtrack, so our hopes are high that the sequel delivers one that makes the grade.

But before we get into the soundtrack itself, here’s a quick synopsis of the film’s plot for those who haven’t seen it, or just need a quick refresher. We’ll try to keep it spoiler free, but let’s be honest, if you haven’t seen it yet, you’re probably not reading this anyway.

“Spider-Man: Far From Home” is the first MCU film to take place immediately following the events of “Avengers: Endgame”. After the loss of Iron Man, the last thing Peter Parker wants to do is deal with more superhero problems. So, after ghosting Nick Fury, he attends a relaxing European vacation with his class. But his vacation plans are soon ruined by the disruption caused by monstrous elemental creatures. Peter then dons the suit to help the mysterious Mysterio fight them off. But he soon finds out that everything is not what it seems.

The first song heard in “Spider-Man: Far From Home” is Whitney Houston’s “I Will Always Love You”. This song plays over the opening sequence during an “in memorandum” video presentation from Peter Parker’s high school news station. Not only does it serve as a hilarious way to introduce the next phase of the MCU, but it also plays into one of the major problems Peter Parker deals with throughout the film (figuring out how to move on after the death of Tony Stark).

Since most of the film takes place in Europe, there’s plenty of appropriate music to fit the destination. Like Marcela Laiferova’s “Sinko” which plays while the class is on their way to Prague.

While the pop songs are fun, Michael Giacchino’s score does a great job of keeping up the sense of excitement in the fight scenes. But the score also maintains the film’s sense of humor with punny title tracks like “Praguenosis: BAD” and “Brad to the Drone”. One of my personal favorites, however, is “Night Monkey Knows How To Do It”, which comes in during a fight scene in Prague against a giant fire monster. Its title is also great, because the “Night Monkey” is Ned’s made-up European knock-off Spider-Man name, and I love it.

Overall, Michael Giacchino’s score to “Spider-Man: Far From Home” is filled with pretty standard Marvel compositions. But despite that, it still stands as a solid addition to the MCU. Although, to be perfectly honest, I’m always more interested to see the list of popular songs that make a film than the scores that accompany them. But it’s always good to pay respects to the music that doesn’t always get the spotlight.

That about does it for our overview of Michael Giacchino’s score to “Spider-Man: Far From Home”. You can see the full track list below for the rest of the punny track titles in the soundtrack.

One response to “Exploring Soundtracks: Spider-Man: Far From Home”

“The Greatest Showman” does not disappoint – – movie review