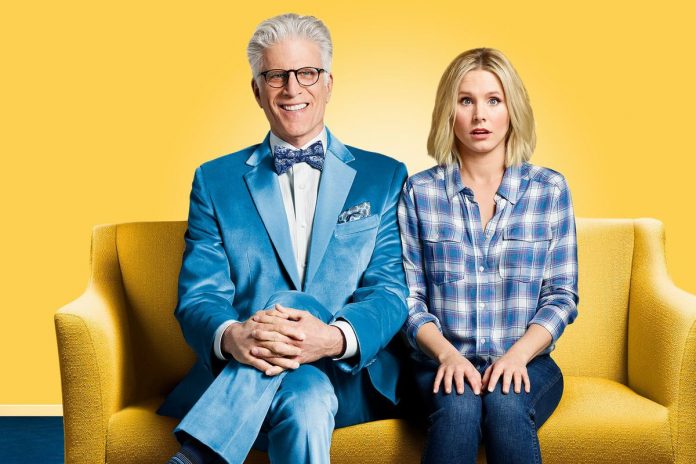 If you haven’t yet watched Michael Shur’s fantasy comedy series, then now’s the time. But here’s a synopsis in case you’re a bit curious (no spoilers).

“The Good Place” follows the story of Eleanor Shellstrop (Kristen Bell), who wakes up in an afterlife introduced to her as the Good Place by the “angel” Michael (Ted Danson). However, Eleanor soon finds out she was sent there by mistake. In order to prove that she belongs in the Good Place, she enlists the help of a moral philosophy professor to teach her to become a better person.

While it may be about becoming a better person, “The Good Place” also sports a collection of solid songs in its soundtrack. Granted, it doesn’t reach the same level of meticulously crafted soundtracks as we’ve seen in other shows. Music plays a bit more of a muted role here. But because of its sparse soundtrack, it makes it easy to bring the entire collection of songs to one article. Episodes below that are omitted contain only the original soundtrack as music.

So without further ado, here’s our roundup of every song played in each season of “The Good Place”.

Musical highlights of this season include Ariana Grande, Louis Armstrong, and N’Sync.

S1E1: Everything Is Fine

The best (read: worst) two tracks of Season 2, “She Hates Me” and “Grandma Got Run Over By a Reindeer” end up being played simultaneously in a few scenes. This is what they listen to in the Bad Place. You don’t want to go there.

N’Sync makes a comeback in this season, but as the drama intensifies, we get more songs that pull on our heartstrings like, “We Love You So” by Carter Burwell. Also, Cher.

S3E: Everything is Bonzer! Part 1

S3E6: The Ballad of Donkey Doug

S3E9: Don’t Let the Good Life Pass You By

That about does it for our soundtrack roundup of “The Good Place”, seasons 1 – 3. The fourth and final season of “The Good Place” is set to premiere on NBC on September 26th. So be sure to get all of your binging out of the way before then. And be sure to keep your ears open throughout this season for any musical gems you might hear.