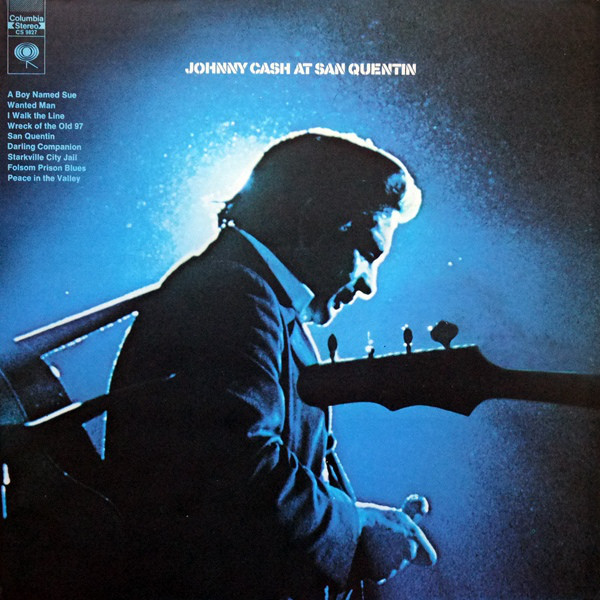 Today we’ll be dipping into a little American music history by heading all the way back to 1969. On August 23rd of that year, Johnny Cash’s “Johnny Cash At San Quentin” started a four-week run at No. 1 on the US album chart. It was Cash’s 31st overall album, and was recorded live at San Quentin State Prison, just one year after the widely successful and well known “At Folsom Prison”.

During the live concert, Cash frequently joked with the inmates in between songs, and kept spirits high. At one point, he brings out his wife June Carter to sing a duet of “Darling Companion” by John Sebastian.

The inmates of San Quentin also was saw the first time Cash played “San Quentin” and “A Boy Named Sue” live on stage. Considered the major new song of the set, “San Quentin was played twice throughout the concert.

At San Quentin: For the Inmates

The concert was filmed by a crew from Granada in the UK for a broadcast on television. In between songs, you can hear Cash reference the recording.

“The show is being recorded, and televised, for England. They told me, they said you gotta do this song, you gotta do that song. You know, you gotta stand like this or act like this. I just don’t get it, man, you know. I’m here. I’m here to do what you want me to do and what I want to do.” The little speech was met with thunderous applause from the inmates.

One song that got a lot of laughs from the inmates was “Starkville City Jail”, which Cash prefaced with a short story about a time he was arrested for picking flowers in Starkville. The song itself is a retelling of the following story.

“I was walking down the street, going to get me some cigarettes about two o’clock in the morning after a show. Reached down to pick a dandelion here, and this car pulls up and says get the hell in here, boy, what are you doing? I said, I’m just picking flowers. Thirty-six dollars for picking flowers. And a night in jail. No tellin’ what they’d do if you pulled an apple or something.”

Johnny Cash debuted the song he wrote specifically for the inmates of San Quentin. Earlier, between songs, he mentions that he wrote it the night before. The song was such a hit, that Cash played it a second time at the inmates’ request.

Lines that got the most applause were those like, “San Quentin, what good do you think you do? / Do you think I’ll be different when you’re through? / You bent my heart and mind and you warp my soul. / And your stone walls turn my blood a little cold”.

In between the back to back performance of “San Quentin”, Cash calls up a guard for a glass of water. He laughs as he says, “If the guards are still talking to me, I could use a glass of water.” You can tell just by listening when the guard crosses the stage, as he’s met with a host of ‘boo’s’ from the inmates.

While we’ve mentioned a lot of the songs Cash plays at San Quentin, there are still some we missed. To rectify this, we’ll leave you with the full track list for “Johnny Cash At San Quentin”.

You can pick up the “Johnny Cash At San Quentin” LP over at the LemonWire store by clicking here.

Fred Farell’s “Distant Song” is a moody exploration of romance