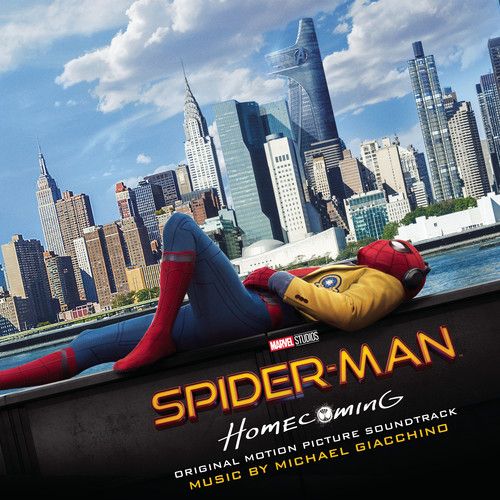 After a short hiatus, Exploring Soundtracks is back. This week, we’ll be looking at the most recent incarnation of Spider-Man in the MCU. Without a doubt, “Spider-Man: Homecoming” is one of the most fun soundtracks since “Guardians of the Galaxy Vol. 2”. With tracks from The Rolling Stones, Spoon, and Ramones, as well as a killer score, this is a must have for any fan of the friendly neighborhood web-head.

In this adaptation of Spider-Man, Peter Parker has recently been recruited by Tony Stark and given a new, updated suit. But the young Spider-Man is still in high school, struggling to balance being a student, friend, nephew, and hero. When the Vulture (Michael Keaton) starts brewing real trouble in the neighborhood, its up to Spider-Man to step up and earn the right to wear the mask.

It’s too bad that some of the best songs heard in the film didn’t make the cut to the soundtrack. Still, they play a big role in helping to establish the lighthearted tone of “Spider-Man: Homecoming”.

After the opening credits, “Can’t You Hear Me Knocking” by The Rolling Stones plays as the Vulture is introduced. The blast of hard rock is reminiscent of the use of AC/DC in the first Iron Man, and does a good job setting the outlaw tone for the Vulture’s crew.

Another great use of tone comes in as we see Peter heading back to school after getting his new suit. “The Underdog” by Spoon keeps things whimsical and upbeat as we follow Peter through a normal day at school.

And of course, one of my favorites sequences in the film is when Peter roams around the city solving minor crimes and testing out his powers. As he does, “Blitzkrieg Bop” by the Ramones plays as a nice complement to Spider-Man’s whimsical nature.

Again, none of these songs made it to the soundtrack, but as far as I’m concerned, they’re essential to the musical landscape of the film.

As far as the actual soundtrack is concerned, the bulk of the credit goes to composer Michael Giacchino, the same composer behind the soundtracks to “The Incredibles”, “Star Trek”, and “Rogue One”. Suffice it to say, this guy knows how to make a good film score. While creating the soundtrack for “Spider-Man: Homecoming”, Giacchino made sure to keep its lighthearted tone at the forefront.

The score opens with the original theme from the original “Spider-Man” TV show, a nice nod to the character’s history, while still fitting the updated version.

Almost all of the tracks for the score feature silly puns in their names or funny cues to the film. Tracks like “On a Ned-To-Know Basis” and “A Stark Contrast” give this soundtrack a more whimsical tone that matches that of the movie.

You can pick up the vinyl of the “Spider-Man: Homecoming” soundtrack by heading over to the LemonWire store here. Otherwise, take a gander at the rest of the punny titles in Michael Giacchino’s score.

British royal family thanks those who celebrated wedding