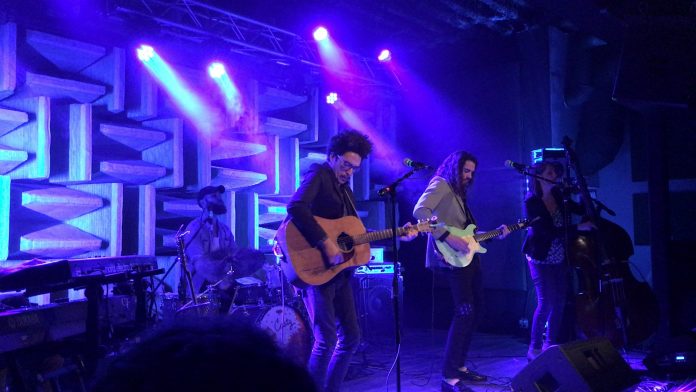 Last Friday night, The Hi-Fi once again opened its doors and dropped the cover charge to introduce Fountain Square to three upcoming names in the Indianapolis music scene. For August’s show, they didn’t bring in any completely new artists. If you follow the Indy music scene closely, you’re sure to recognize a few names.

There were about two dozen people gathered inside Th Hi-Fi when I walked in. Most of them were lounging at the bar with drinks, or sitting at the handful of tables that lined the walls. As I bought myself a drink and found my own little table near the stage, I silently hoped that the place would fill up as the night went on. For the artists’ sake, if nothing else.

I didn’t have to wait long until Levi Driskell took the stage. He immediately introduced himself to the crowd, and announced that he has a new EP coming out this fall. Without wasting anymore time, Driskell launched into his set with, “My Song”. 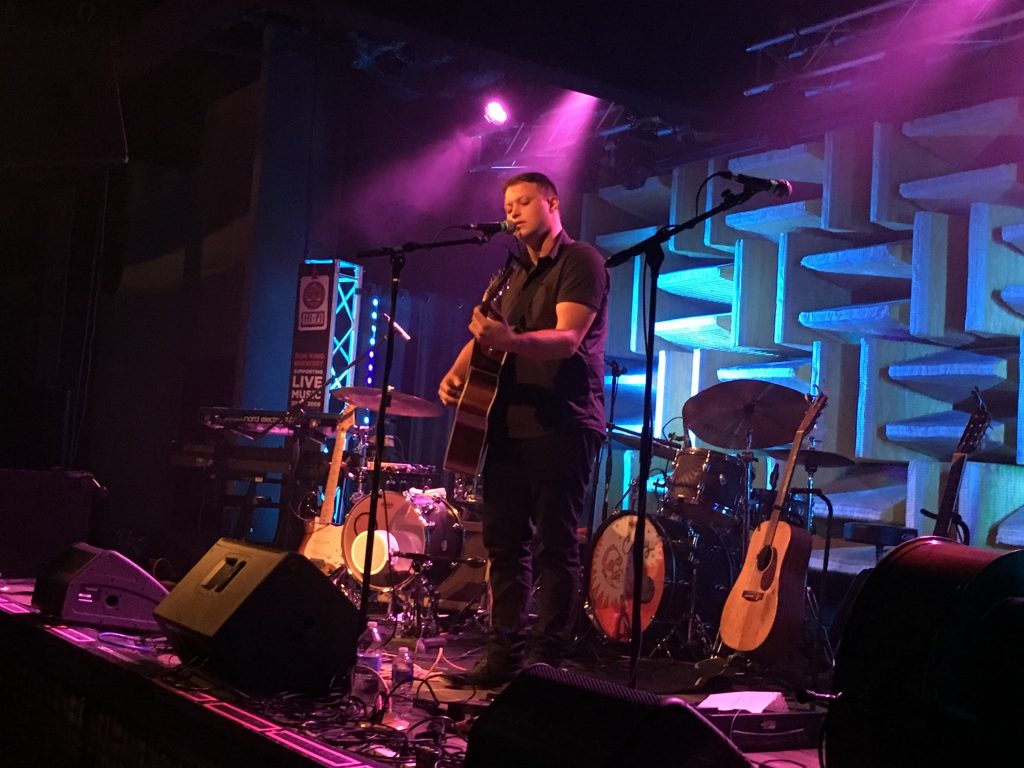 If there’s one thing you can say for sure about Levi Driskell, it’s that he sings his heart out. His voice has a really nice range, and I never heard him struggling to reach those higher notes. In a lot of his songs, when the time comes to belt out, Driskell does so unflinchingly. I don’t doubt that the personal truth behind his songwriting helps him do so.

One of these more personal songs, “It’s My Time”, is about going out into the world and getting what’s yours – what you really want. A notable line of lyrics is, “You could be anything in the world you wanted / But you’re too scared to try”. While it comes from a personal place, the message itself is a universal one.

There’s a certain kind of power someone achieves when they bear their soul, become vulnerable, and express themselves to a group of strangers. Almost like they’re untouchable, in those moments. Levi Driskell was full of so much soul, hope, and joy as he played that it was infectious. He was really a delight to watch and listen to, and I’ve got a feeling he’ll be popping up more around the city. So keep an eye out.

After Levi Driskell’s short, half-hour act, Steve Boller took the stage at 9:00. Initially, when I saw him come out on stage, I assumed we were in for another solo acoustic set. But then he introduced his drummer, who came out and took a seat. It was this seemingly small addition that ended up giving Boller’s act a fuller sound than would be possible otherwise. 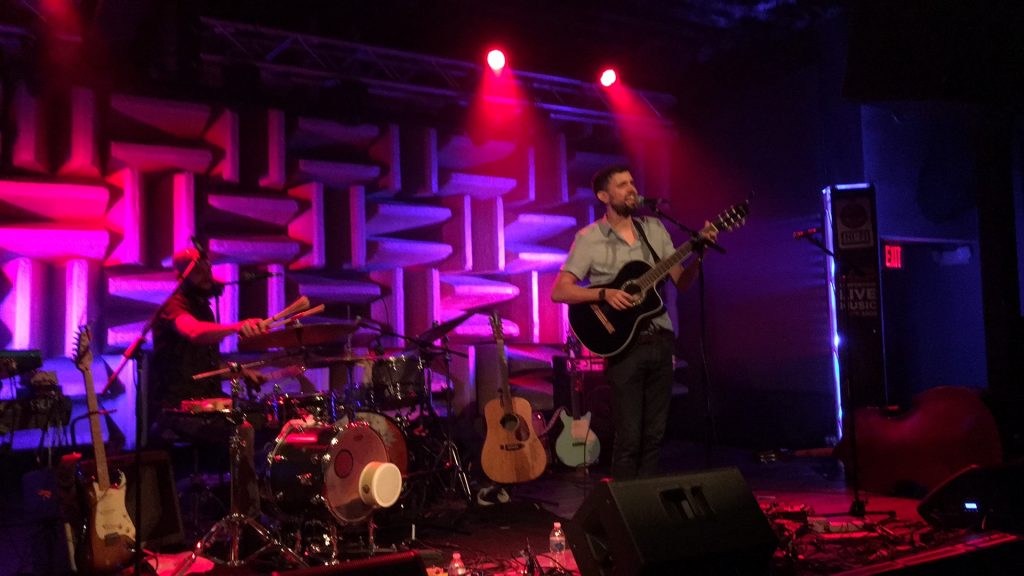 Boller played a few songs from an album he released two summers ago at The Hi-Fi called, “Let’s Begin”. So you know he’s not strictly a “new face”, but cut The Hi-Fi some slack. I’m sure it’s difficult to find completely new and unheard of artists each month, while also making sure to put on a good show.

Overall, Boller is very good at what he does. And while all of his songs aren’t carbon copies of fingerstyle, acoustic, pop tunes, they do all share a similar structure, mood, and style.  Still, if you want light, uplifting, and catchy, you can’t go wrong with Steve Boller.

By the time Carmichael was setting up on stage, the crowd in The Hi-Fi had nearly tripled. This may come from the fact that Carmichael has a bit of a higher profile than the previous acts. I’m sure there were people coming in just to see them. In fact, this was the only act that brought the crowd closer in to the stage, and away from the tables and walls. 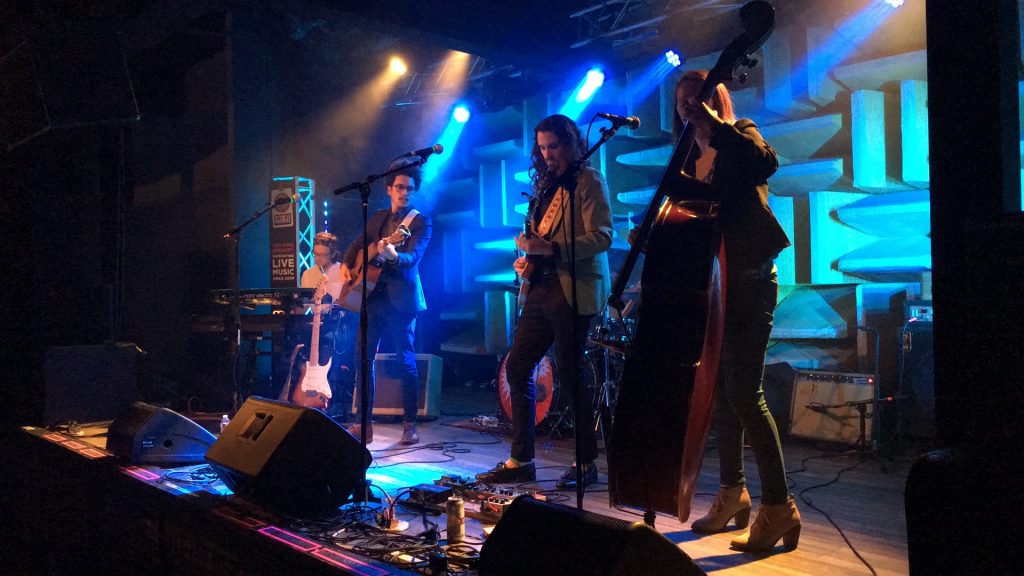 Carmichael is a five-piece band with a good range of instruments, and plenty of vocalists to give their songs a wide range of variety. They opened with their three vocalists singing a capella before launching into an instrumental groove to.

There was a lot of balance and subtlety to Carmichael’s performance. Above all, the melody was put first in each song, and passed between vocals, guitar, and keys without fail. This was done at the same time that they effortlessly drifted from one genre to the next. It really became hard to try to categorize them into a single style of music, which I believe is there intention. They were a true pleasure to listen to, and my only regret is that they didn’t stay on stage longer.

Overall, this month’s New Faces Night at The Hi-Fi had a good range of artists and styles represented. I’m pleased to say that every single one of them brought their all to the stage. Keep an eye out for these names. I’m sure you’ll be seeing them again soon.