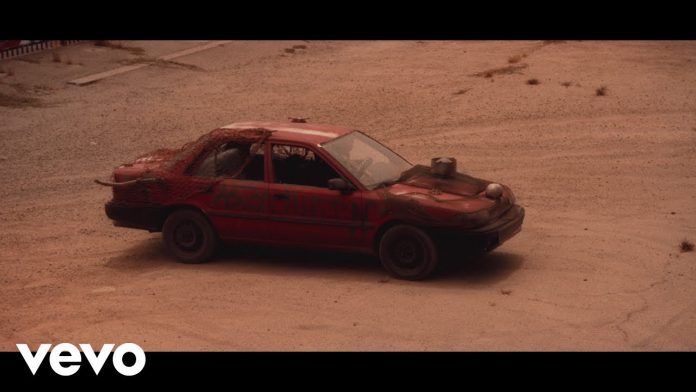 “Mad Max” meets “The Fast and The Furious”?

The similarities to the original “Mad Max” are undeniable. The cars, the clothes and the locale all scream that civilization has ended and mankind has fled to the desert. Sure, many people think the world is currently ending, but are there no other options for how that might look? We’ve seen tons of movies copy (or pay homage to) “Mad Max” including remakes and straight up rip-offs. We’ve even seen hip-hop already do the “Mad Max” thing with “California Love.”

The point is, we could come up with something else. Keep it in the desert but change the vehicles or something.

I’m not completely sure about the F&F angle. It seems like Mensa and G-Eazy are about to race. Plus they have a Starter Girl, so maybe it’s a reference to that franchise. Vic as Vin and G-Eazy as Paul Walker; works in my mind.

A question: what does any of this have to do with the song? Not every song’s lyrics have to match the video, but it’s a nice idea. I guess there are cars in the video though, so that does go with the idea of “Reverse.” Close enough anyway.

Are these your lyrics?

Not much to see here. If a song isn’t going to bop it needs to be about something or have some killer lines.

The only “killer” line is from Mensa’s first verse, “DB11, it’s a ‘vert (skrrt skrrt), it goes skrrt/Keep her panty droppin’, ridin’ shotgun like she Kurt.” The lyric manages to be as bad as the pun that presented it. There’s a similar construction later on about Vince Vaughn. Meh.

G-Eazy doesn’t do much to lift the track either. So we’re left with a bop-less song about cars, women and money.

There is a horrible pun to be made here about wishing I could press reverse on YouTube and have never seen this video. I won’t make it.

That’s just the level of writing, however, that this video deserves. Save yourself the trouble and skip it.

Female Rapper Dreezy Is On The Come Up

G-Eazy affirms the traditions of hip-hop on “No Limit”