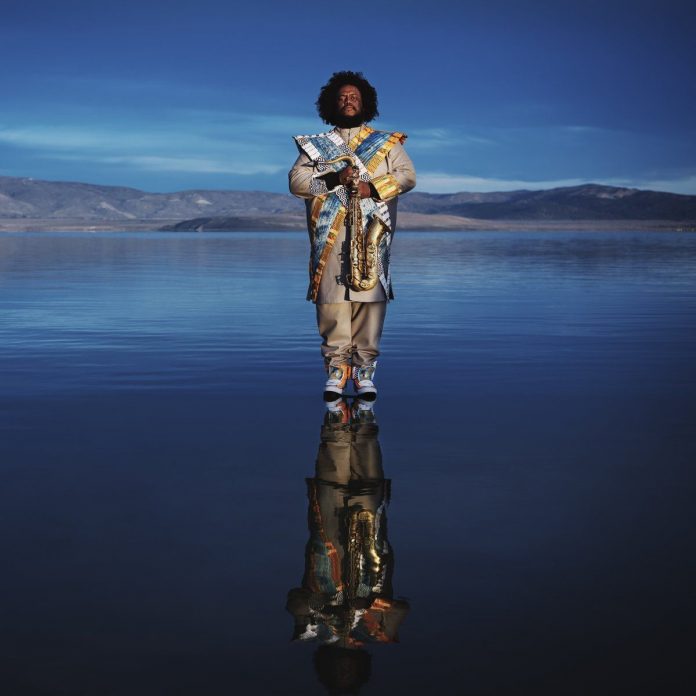 The power of the cosmos has arrived here on earth. But don’t look to NASA to fill you in on the interstellar secrets all around us. That job has fallen into the hands of Kamasi Washington, the new jazz wunderkind that has been beamed down from space to bless us with his grandiose visions, ecstatic stardust explosions of light and color built from the dust and bones of jazz. His latest transmission is “Heaven and Earth,” an album that spins another yarn from Kamasi’s musical fairy tale. Come, children, gather around and keep your eyes to the sky.

As the heavens open, Kamasi’s newest album moves easily into its rightful place beside Washington’s other work. His aptly titled 2015 release “The Epic” blasted listeners with over 2 and a half hours of music, with many songs coasting gloriously past the ten-minute mark in what seemed to be an almost never-ending groove. With extended solos, a large cast of guest musicians and vocalists, and a powerful production, Washington pushed past the known barriers of music, planting one foot firmly in the jazz world and another in his own blend of cosmic, life-affirming R&B music.

Washington summons forth similar energies on “Heaven and Earth.” Each song commands your attention, as powerful as it is full of detail and nuance. This is an album to get lost in, one that enshrouds you in its own mythology while also inviting you to build your own sonic world inside of it.

Now to the songs. “The Space Travelers Lullaby” may be the apex of Washington’s “Heaven and Earth,” ruminating around one of his tightest compositions yet. Gorgeous strings blend into choirs that lift you off your feet and send you soaring skyward, until you can practically see the landscape slipping into the haze underneath a canopy of clouds. Soon you see stars appear in the upper atmosphere and are interstellar bound. And like the planets and other galactic objects passing through your vision, the song ebbs and flows between melody and texture, not settling into any particular groove for long. By the end you drift back home with Washington’s solo saxophone, falling back onto the surface of the earth.

Similarly to “The Epic,” Washington continues his use of wide, sweeping choirs on “Heaven and Earth,” crafting a sound that seems as nostalgic for old Hollywood epics as for mid-century jazz. Many of his compositions wouldn’t sound out of in place in movies like “Ben-Hur” and “Lawrence of Arabia,” stories that moved deep into the struggle of man on planet earth. Washington dares to evoke those same emotions from us, giving voice to the struggle of oppressed and the downtrodden while also illuminating the parts of ourselves that reach for the cosmos, for hope and transcendence and peace.

“Journey” finds Washington collaborating with a female vocalist as he has many times before. A strong sax melody brings us in, and we are soon bathed in life-affirming lyrics: “Life and love and peace in my heart / Hallelujah, joy springs.” Beneath the inspirational musings of the song, I begin to notice what makes his music so special. One aspect of song craft that Kamasi and his band do very well is the subtle shifting of arrangements between instruments. Stale jazz often occurs when the groove becomes redundant, and every song devolves into a series of solos over lifeless backgrounds. On “Journey,” the song subtly shifts across the length of the track. As the organ, for example, is soloing, other instruments are moving and evolving underneath, and by the time you see light on the other side of the solo it’s a whole different song, fresh and ready to be devoured.

But that’s just another detail about Washington’s music that helps it ascend above the rest. “Heaven and Earth” is another incredible undertaking from Kamasi Washington, cementing his status as one of the greatest living jazz musicians today. If anyone is to bring jazz back to the masses, showing us how music can guide and illuminate us, it is Washington and his insatiable, cosmic vision.

McClenty Hunter Jr. seeks and finds on “The Groove Hunter”

Tuomo Uusitalo’s forthcoming album, “Stories From Here and There” an exciting...