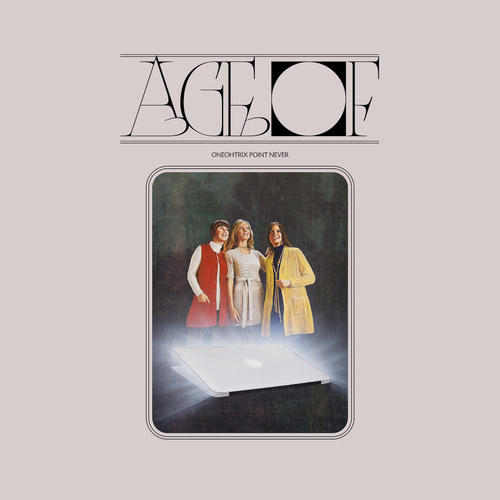 Coming off the critical success of his much acclaimed score for the 2017 crime drama “Good Time,” Boston-born electronic innovator Daniel Lopatin, working under his most commonly used aliases “Oneohtrix Point Never,” has returned with his first solo outing of 2018, “Age Of” to much anticipation.

With such a varied body of work, it would be far too glib to make note of “Age Of’s” stylistic departure from most previous Oneohtrix Point Never projects (such as has become the norm), and yet, even in the context, the diverse backcatalogue of Lopatin/ “Age Of” is an additional step away from anything he’s done prior, due ironically to it being the most traditional project thus far. None of this is to suggest that “Age Of” is lacking in the sonic distincteveness expected of an Oneohtrix Point Never album – – it isn’t, but rather the album sits comfortably within the realm of established underground and indie electronic convention rather than sitting at the outermost edges of it, as tends to be anticipated before any new Lopatin project. But while “Age Of” breaks very little new ground, this hardly renders it a failure as an album; to the contrary, it’s almost refreshing to know that Lopatin can work just as proficiently within the box as he can well outside of it.

“Age Of” may not be Oneohtrix Point Never’s best album by any stretch, but it may very well be his most polished and most mature, the album in which he seems most fully confident in himself as a producer; nothing really feels misplaced. This isn’t necessarily for the best in all cases however. Looking back at Lopatin’s best work -as Oneohtrix Point Never or otherwise- there’s a certain explorative quality that pervades (if not defines) much of his approach. It’s not as tight or self-assured as the smooth and sleek stylings of “Age Of”, but records like 2013’s “R Plus Seven” and 2010’s “Eccojams Vol. 1” (produced as Chuck Person) exude an almost childish sense of uncertain wandering; the listener can sit back in rapt fascination at the sheer wonder of having no idea where the music might travel next, feeling intensely that everything is just as new and wonderfully unexpected to the music’s originator himself as it is to the recipient.

“Age Of” in contrast, suggests a creator working with a detailed and precise map, and while many of the turns may be nonetheless fresh unexpected to the listener, there is no real sense that this is a shared experience between creator and receiver. This isn’t to suggest “Age Of” necessarily suffers from its striking professionalism, but rather that Oneohtrix Point Never’s approach to production is of a decidedly different sort than that which has historically precipitated his most well-regarded works. And for some, particularly those who have felt unsatisfied with but still intrigued by Lopatin’s work in the past, this entirely new approach may very well be a net-positive.

The first point of departure “Age Of” makes from the broader history of Oneohtrix Point Never appears almost immediately, with the opening title track greeting the listener with minor-key harpsichord sample that, in contrast to the more quintessentially “electronic” alien sounds of prior Lopatin efforts, sounds extremely tonally similar to a plain old harpsichord. Of course, very little time needs to pass before this initial track is supplemented by building layers of various drones and light static, but it remains predominately built around what is, somewhat shockingly, almost a regular instrument. At least until the track nears its closing, when the harpsichord drops any semblance of normalcy and becomes pitch-shifted and tonally warped into oblivion, along with the rest of the track’s components. Not surprisingly, this is the most interesting portion of the song.

Track two, “Babylon” continues this trend of being abnormally normal with something that is scarcely heard anywhere in Oneohtrix Point Never’s music: vocals that are recognizable as belonging to a human. Vocal samples have made appearances in Oneohtrix Point Never albums before certainly, but namely in the form of electronically interpreted vocal samples mapped to a midi keyboard and used like any other instrument (as can be heard on the EPs “Commissions I” and “Commissions II” “Babylon’s” vocals, oddly tuned and distorted though they may be, can be plainly identified as “singing,” and as belonging to their own track that sits superimposed at the song’s forefront, as opposed to buried in equilibrium with every other track in the mix. Consequently, the song sounds far less like any of the post-Klaus Schulze progressive electronic that build the core of Oneohtrix Point Never’s sound and much closer to the indie-electronic music that became popular in certain circles following Sufjan Stevens’ “The Age of Adz,” and has been more recently explored (to far lesser degrees of success) with records like Bon Iver’s “22, a Million” (among others). Following “Babylon,” the album continues to feel less like a study of 1970s German electronic experimentation (a common primary point of influence for Oneohtrix Point Never) and more one of 2010s indie-sphere electronic exploration.

The entire stylistic switch-up doesn’t always suit Oneohtrix Point Never as well as one might hope, and indeed the album periodically falls flat with several tracks being fairly indistinguishable from one another, but it still manages to never quite overstay its welcome, even at nearly fifty minutes in length. And while this new musical approach may not be the most enjoyable of  Loptain’s many sonic identities, the vast majority of the music contained in “Age Of” is extremely well-crafted and never truly “bad” even when it falters; one gets the sense that Lopatin accomplished exactly what he wanted to with this record, and perhaps this palpable confidence in his ability to tackle the familiar with just as much finesse as the new, even if it is not always to the taste of the listener, is what holds the album together so very tightly.

Purchase “Age Of” here from Bleep

Preview: The Werks w/ Calabash at The Mousetrap