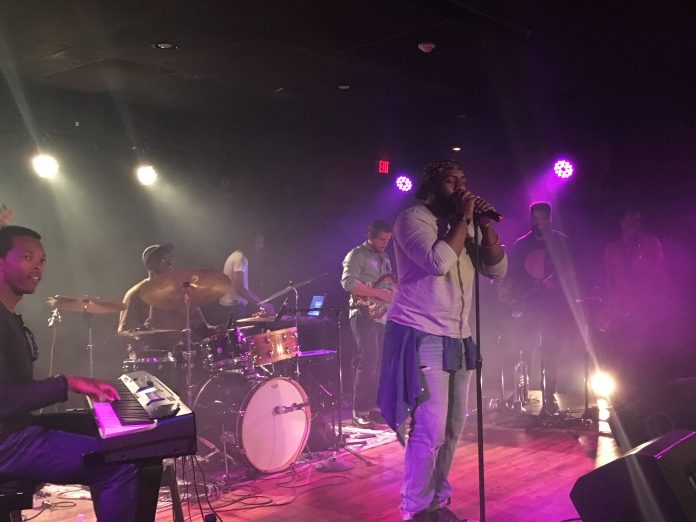 There was only a modest crowd gathered around the bar when I first entered The White Rabbit Cabaret last Friday night. Some sat in chairs or couches towards the back, while a few couples were scattered about at tables facing the empty, but well lit stage.

I walked to the bar, and felt it was more than appropriate to buy an Upland beer. It was their big night, after all. And, as an IU alumnus, I still hold a special place in my heart for the Bloomington brewery. The White Rabbit had a pretty good selection of both tapped and canned brews available. Upland fans would recognize the Dragonfly IPA, Wheat Ale, Two of Tarts, the return of the Preservation Pilsner, and more.

I ordered an IPA called “Little Wheat Lies”, found myself a small table near the back, and waited patiently for the music to begin.

Around a quarter to nine, the night’s host took the stage, introducing himself as Frankie J.J. Holiday Jr., The White Rabbit’s resident cinephile. He hosts their free movie viewings, “Frankie’s Flick’s”, once a month. Tonight, however, his job as host was to ask the crowd trivia questions and hand out prizes of Upland merchandise.

The first musical guest for the evening was DJ Xerox the Kid, who took the stage at 9:00. Personally, I’ve never really thought of DJ’s as musical performers, unless they’re the kind who actively mix songs and samples together to create something new.

DJ Xerox the Kid was not one of these. He played the role of a more traditional DJ, and merely curated a playlist of old school songs to set the tone for the evening. I did appreciate his commitment to his role, however, and was surprised to observe that he was playing actual records – what looked like 45’s – on a turntable, rather than simply hooking up his Spotify account.

The songs Xerox the Kid played were diverse, upbeat, and fun. A lot of them had classic rock, jazz, swing, or surf vibes to them, which was fun. I guess if you think of a DJ more like a curator for the soundtrack of your environment, it’s actually kind of cool.

The music and the lights and the atmosphere all together made me feel like I was in the middle of a scene in a Tarantino film. Luckily, that was as far as the similarities went. Really glad the host didn’t get into a Mexican standoff over the Upland merchandise.

Clint Breeze and the Groove 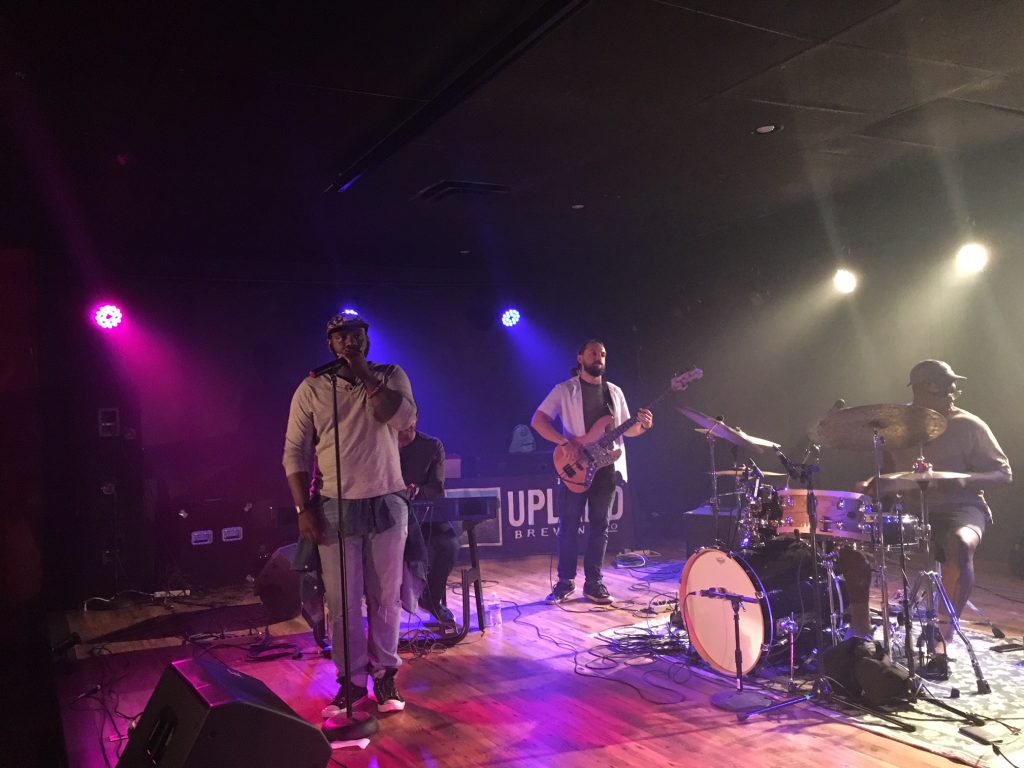 By 10:00, Clint Breeze and the Groove had finished setting up, and were taking the stage. They wasted no time, and immediately jumped into a jazzy, funky number right of the bat. Emcee and vocalist Theon Lee laid down raps over the soul-filled groove. His natural charisma also helped to get people up on their feet and dancing later in the night.

It was my first time ever seeing Clint Breeze and the Groove play, and I was delightfully surprised by just how good they all were. The band is aptly named, and let the groove of each song take the spotlight. They proved to be more of a jam band than I was expecting, too, and reminded me of The Main Squeeze in the way they approached their live performance.

Frequently, Theon Lee would call out for a solo from one of the many members. One by one, they each proved themselves supremely competent improvisers. I really appreciated the diversity of sounds and styles in both their songs, and each members individual tastes.

The members of Clint Breeze and the Groove are Theon Lee (emcee, vocals), Nick Tucker (bass), Joel Tucker (guitar), Jared Thompson (sax), Jay Higginson (trumpet), Chris Pitts (keys), and Clint Breeze on drums. You can find them on Facebook, Instagram, and their website.

I had a great time during Upland’s 20th Anniversary Celebration. Great beer, better music, what’s not to like? If you didn’t get a chance to make it out to The White Rabbit, fear not. Upland is having another 20th Anniversary party in Bloomington on August 19th, which you can find more about here.

And as for Clint Breeze and the Groove, be sure to look out for them around town. You won’t regret spending a night listening to them. I guarantee it.

Previews: Matthew Sweet at the Hi-Fi