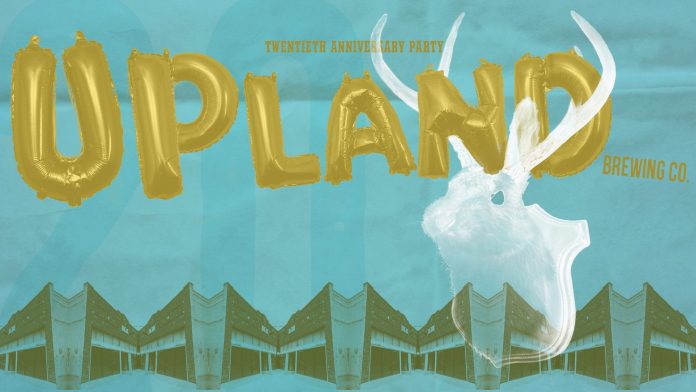 This Saturday, July 27th, The White Rabbit Cabaret in Fountain Square will be hosting the 20th Anniversary Celebration for Upland Brewing Company. The Anniversary party will feature plenty of Upland brews on tap, live music, and giveaways.

The celebration will also include Upland-based trivia questions, along with free giveaways throughout the night. So be sure to brush up on your craft beer knowledge beforehand. I’m sure the prizes will consist of Upland shirts, hats, bottle openers, or other merchandise of the like.

The best part about Upland’s Anniversary Celebration at The White Rabbit is by far the free concert. I mean, yes, beer is always nice. But how often do you actually get to go to a free concert? Once a month on First Fridays? Okay, sure, so maybe they’re not so rare. Still, it’s at the very least a nice bonus.

Clint Breeze and The Groove will be helping to celebrate Upland’s 20th Anniversary, and providing the much needed music. If you aren’t aware of them, Clint Breeze is the brainchild of hip hop producer and Indianapolis native, Carrington Clinton. Their jazz and soul-inspired sound includes heavy drum compositions that are balanced out with catchy rhythms and melodies.

Upland’s 20th anniversary Celebration kicks off at 8:00 pm at The White Rabbit this Saturday, July 27th. The cover is waived for the night, but the beer ain’t free. So bring a couple bucks, your wallet, and don’t forget the I.D.

Preview: HoneyHoney at The Hi-Fi