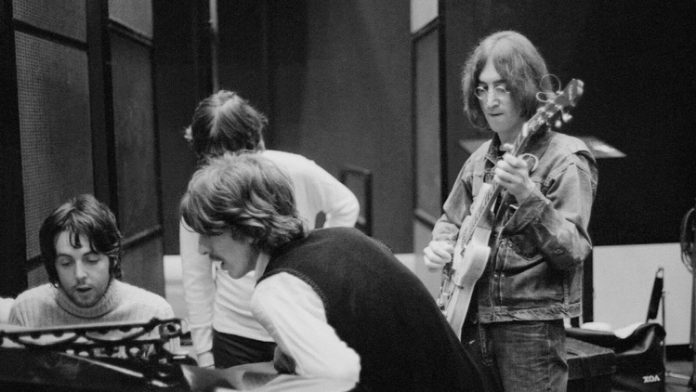 Fifty years ago to the day, The Beatles sat in Abbey Road studios in London, hard at work on their upcoming double-sided album “The Beatles”. The album would eventually be dubbed “The White Album”, due to the plain white cover.

The song the Fab Four ended up recording on this day turned out to be “Everybody’s Got Something To Hide Except Me And My Monkey”. The song features John Lennon’s signature style of poetically nonsensical lyrics, and a frenetic, changing rhythm. And of course, that beloved cowbell. We all love a good cowbell.

When asked about the meaning of the song, John Lennon reportedly claimed that it was about his girlfriend Yoko Ono.

“That was just a sort of nice line that I made into a song. It was about me and Yoko. Everybody seemed to be paranoid except for us two, who were in the glow of love. Everything is clear and open when you’re in love. Everybody was sort of tense around us: you know, ‘What is she doing here at the session? Why is she with him?’ All this sort of madness is going on around us because we just happened to want to be together all the time.”

While it was true that at this time Yoko and John were spending a lot of time together, it was also when the two started doing heroin, as a way to escape the press. Some of the other Beatles supposed that this was what the song was really about, as a “monkey on the back” was an older jazz term for heroin addiction.

While the final recording of “Everybody’s Got Something To Hide Except Me And My Monkey” took place on July 23, 1968, The Beatles were working on and rehearsing the track a full month before. On June 26th, 1968, they recorded a rehearsal of the song. The next day they recorded six more takes.

This was typical of The Beatles’ songwriting process during the White Album. They would record a song multiple times, until they were pleased with a recording. Then, they would overdub the rehearsal to arrive at the final recording.

Most noticeable in this song is the use of cowbell. While its seemingly incessant and unyielding presence seems jarring at first, if you pay attention to it, you’ll notice that it drops out and comes back in over the course of the song. A nice attention to detail.

The backing track is thick and pulsing with the many overdubs of distorted guitar, bass, and drums. After the break down of “Come on, come on, come on…”, the wrenching and distorted, but short-lived solo comes through, and then fades out with the song.

Jazz 101: Jazz on the Internet