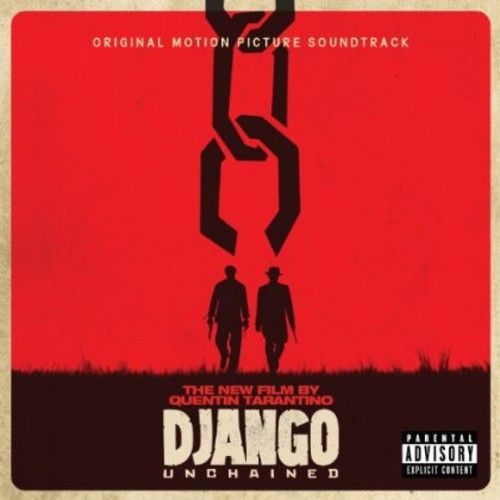 We took a bit of a break from Tarantino films last week. To make up for this, I’m making sure we continue exploring the soundtracks from every Tarantino film. Today, that means taking a closer look at the music behind ‘Django Unchained’, Tarantino’s controversial western.

The soundtrack features many beautiful compositions by Ennio Morricone, the Italian composer behind such memorable western soundtracks as ‘The Good, the Bad, and the Ugly’, and ‘Fistful of Dollars’, as well as many more. It also includes tracks from Rick Ross, Johnny Cash, John Legend, and Luis Bacalov.

The movie opens with credits rolling over a western landscape, following a group of slaves traveling in captivity. Django is among them, and as we follow him we hear “Django” by Rocky Roberts and Luis Bacalov. This opening western ballad tells us everything we need to know about Django’s main quest throughout the film. The lyrics speak to Django’s lost love, and is teeming with longing and sadness. But the song also holds a hopeful quality to it, the one hope that Django holds onto throughout the whole film: finding the woman he loves.

While ‘Django Unchained’ is undeniably a Western, at its heart, it is a love story. Django’s goal from the very beginning is to find and save his lost Broomhilde, and that never changes. Sure, he gets in some much-wanted revenge on the way. But he never loses sight of what really matters to him.

Throughout most of the film, the soundtrack keeps both feet squarely in the Western genre. However, as our heroes approach the Candyland plantation, we get our first taste of contemporary music that strikes a different tone. During this scene, Rick Ross’s “100 Black Coffins” plays as Django and Dr. Schultz make their way into Candyland. The track was produced by Jamie Foxx, and marks the first time Tarantino commissioned a track for one of his films.

As the song was commissioned, rapper Rick Ross keeps his lyrics topical. “Any questions, they hang ’em/ Better pray for D-D-Django/ Got me working in fields, too many years it gets fatal”.

Still, as it appears in the film, “100 Black Coffins” works because it also marks a major turning point in the film, and in the character of Django. The track plays after a power play between Django and some white slavers, and we see Django taking control in a way he hasn’t up until this point. To use Rick Ross’s track as a way to highlight this moment is just one reason why this outlier hits the nail on the head.

The second outlier track comes shortly after the climax of the film, following the death of both Calvin Candie and Dr. King Schultz. During the scene, Django is forced to blast his way through dozens of gun-wielding slavers in the film’s most epic shootout. The backing track to this violent display is “Unchained”, a mashup between James Brown’s “The Payback”, and Tupac Shakur’s “Untouchable”.

Now, some may see this as either another iconic use of music in a Tarantino film, or as an unnecessary revival, and blemish on the legacies of both Tupac and James Brown. I’ll leave that decision up to individual interpretation. Regardless, the track works for me in the film, and helps to emphasize the excitement of the action sequence that plays out.

If you’d like to pick up the ‘Django Unchained’ soundtrack, you can head over to the LemonWire store here.