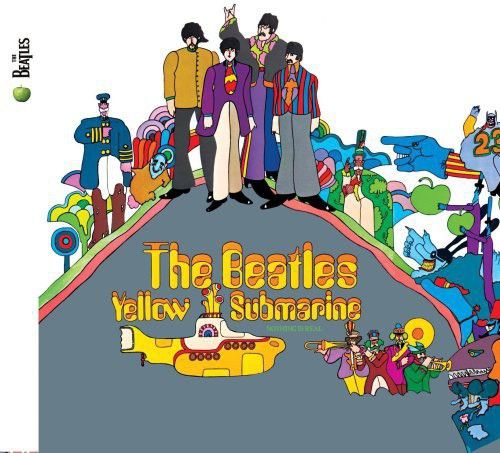 50 years ago on this day, ‘Yellow Submarine’ premiered at The London Pavilion. I can’t imagine how impactful seeing it on the big screen in 1968 must have been. The adventurous, musical, animated romp of a film came after the height of Beatlemania, and only a few years before The Beatles disbanded.

The film was directed by animation producer George Dunning, and produced by United Artists and King Features Syndicate. Initially, The Beatles were set to voice animated versions of themselves, but ended up appearing only in the closing scene of the film. Their cartoon counterparts were voiced by other actors.

Pepperland is a happy, music-loving paradise under the sea protected by Sgt. Pepper’s Lonely Hearts Club Band. But when the land comes under attack from the music-hating Blue Meanies from beyond the mountains, the magical land begins to lose its music. Many inhabitants are frozen still and motionless. As a last resort, Pepperland’s Lord Mayor sends an old sailor by the name of Old Fred off on the Yellow Submarine to find help.

Old Fred then travels to Liverpool, where he finds and follows Ringo until he convinces him and his friends to travel back to Pepperland. Throughout their journey, the group travels through seven different seas, before coming to the Sea of Green, which takes them back to Pepperland.

When they arrive at Pepperland, the land is covered in thorns, and has been turned into a barren wasteland. The Beatles take to disguising themselves as Pepperlandians, then sneak into the Meanies’ hideout to steal instruments. Then the Fab Four rally the land into rebellion with the help of Sgt. Pepper’s Lonely Hearts Club Band. Together they force the Blue Meanies back, and restore the land back to its happy, music-loving paradise.

At the end, The Beatles return to their home in live-action, and admire their souvenirs from the trip.

Music through the Seas

Although the plot is rather simple and straightforward, it’s really not what’s being put on display here. Most of the scenes serve as set pieces for animated musical videos of Beatles songs. For example, when The Beatles first board the Yellow Submarine, they immediately start messing with the controls, singing “All Together Now” as they take off.

Likewise, as they travel through the first sea: The Sea of Time, the band starts seeing themselves aging backwards and forwards in time. They grow older to the tune of “When I’m Sixty-Four”, the end of which signals the Yellow Submarine moving into the Sea of Science. In this sea, they sing “Only A Northern Song” until they pass into the Sea of Monsters, where no songs are played and the band is sucked into a vacuum monster.

In the void of the vacuum monster is the Sea of Nothing, where the band meets Jeremy Hillary Boob, Ph.D., and sing “Nowhere Man” in reference to him. After passing through the Sea of Nothing, The Beatles reach the Foothills of the Headlands, where John sings “Lucy in the Sky with Diamonds”.

These animated musical numbers are where the movie really shines. The pop art visuals do more than justice to the classic songs. It’s little surprise that it was a box-office hit during the psychedelic pop culture craze of the 1960’s.

And if hearing all of these old songs makes you nostalgic for the Beatles’ era, you can pick up the remastered ‘Yellow Submarine’ album here. Feel free to browse around the LemonWire store for other classic Beatles albums. You really can’t go wrong.

To commemorate the 50th anniversary of ‘Yellow Submarine’, Abramorama re-released the film on July 9th to 79 theaters. the showing of the film will be expanded throughout the summer. But if you’d rather not see it in theaters, you can also head over to Amazon Prime. Their streaming service is now offering ‘Yellow Submarine’ among their current selection.

If you ask me, I’d strongly recommend that you give this classic animated film a second, or even third viewing. ‘Yellow Submarine’ stands apart, not only as a wonderfully enjoyable musical story, but also as a shining example of the versatility of animated features.

Sublime documentary sheds light on the band, the opioid crisis

Baby Driver Is A Wild Ride