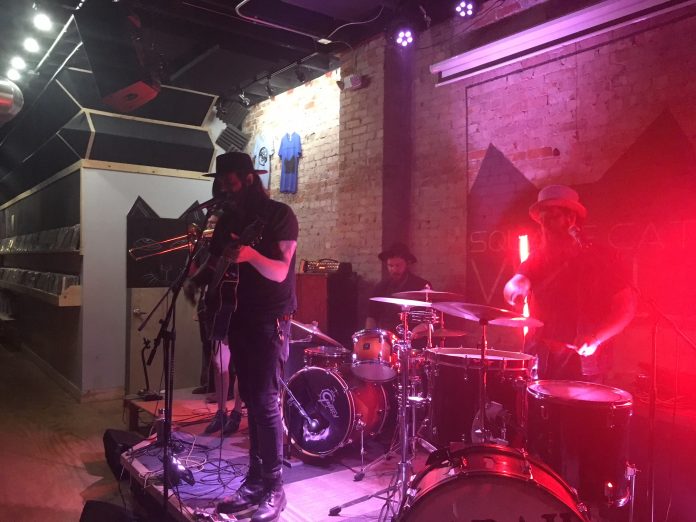 Last Saturday night, Square Cat Vinyl in Fountain Square hosted Marah in the Mainsail, a traveling band from Minneapolis, Minnesota. Before they took the stage, however, Square Cat brought up a couple of local acts to warm up the crowd. 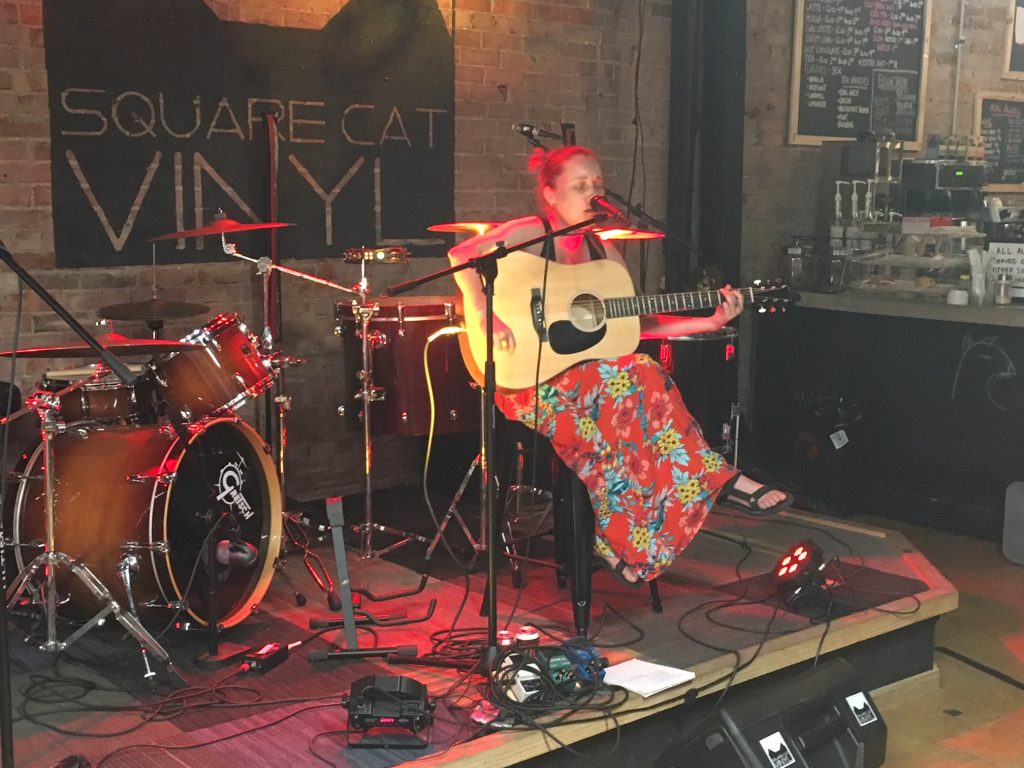 The night started off slow with a solo performance by singer and songwriter Megan Hopkins. I happened to walk in as she was finishing up a song, and managed to catch a few surprisingly insightful words after she finished, and addressed the crowd. Turns out, it works as a great soundbite for anyone unfamiliar with Hopkins.

“My favorite thing about playing music is being around people. I don’t care if it’s a small crowd or a big crowd, I’ll take it.”

In between songs throughout her performance, Hopkins would periodically address the crowd with sentiments like this. She spoke casually, with a sense of familiarity and goodwill that balanced out the melancholic tone of most of her songs. These are songs with strong themes of heartbreak, loss, hope, and redemption. Some of her lyrics speak to these themes directly, as she sings,”Somewhere outside of North Mississippi, I lost my heart to a ghost.”

But Hopkins’ lyrics would just be words without the voice she sings them with. She demonstrates an impressive amount of both range and control, while using only a barely discernible amount of reverb for effect. Hopkins isn’t afraid to turn on the roughness, either. On the contrary, it seems to suit her style quite well.

Hopkins’ guitar playing is rather minimalist, but always carries the necessary components to carry the song along. Strong rhythm, clean chords. Simple, yet effective. When she brings it all together, you hear her sadness and pain, but there’s also hope and light there, too. If you see her playing around town, be sure to stop and stay awhile. You won’t be disappointed. 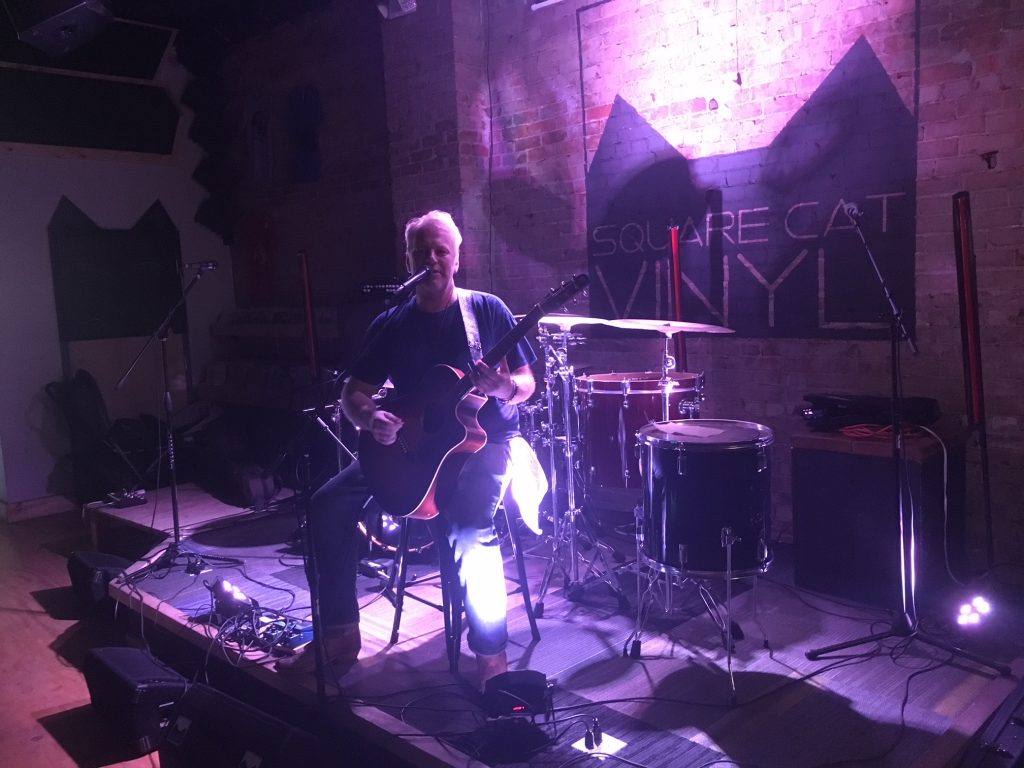 Some people believe that successful bands need to have a gimmick to make themselves stand out. I’m not one of these, but if I were, and if it were true, then SlideCat’s gimmick would be the titular slide, featured in every song he plays.

Like Megan Hopkins, SlideCat is a solo musician, singer and songwriter. Even if he is a little gimmicky, he doesn’t seem to mind. The slide is a good fit then, for his lackadaisical style and laid back attitude, as well as the alternative country songs he plays like “Too Much Whiskey and Blood”.

Throughout his performance, SlideCat played mostly simple tunes with humorous lyrics and an emphasis on storytelling. He sang songs fit for cowboys and rebels alike, with a self-aware, tongue-in-cheek attitude. He didn’t take himself too seriously, that much was apparent. It was refreshing, in a way, and a bit of a mood-lifter after Hopkins.

Even with his playful tone, however, SlideCat was still able to play some songs with more serious and uplifting themes of hope and love. As he put it before launching into one of these, “This song is for those going through tough times and stuff.” The song incorporated lyrics like, “May the hopeless be redeemed”, a far cry from cowboys and whiskey, but oddly enough, it didn’t seem too out of place.

“Wrote that song as I was sitting in a mancave during a party”, SlideCat said after he’d finished. “Everyone was drinking, and I was thinking the whole world was falling apart alone in a corner.”

SlideCat was more than meets the eye, and more than just a simple gimmick. If you’re ever in Fountain Square, and hear the sound of glass on brass strings coming from a venue, it’s worth checking if SlideCat’s the one playing.

Marah in the Mainsail 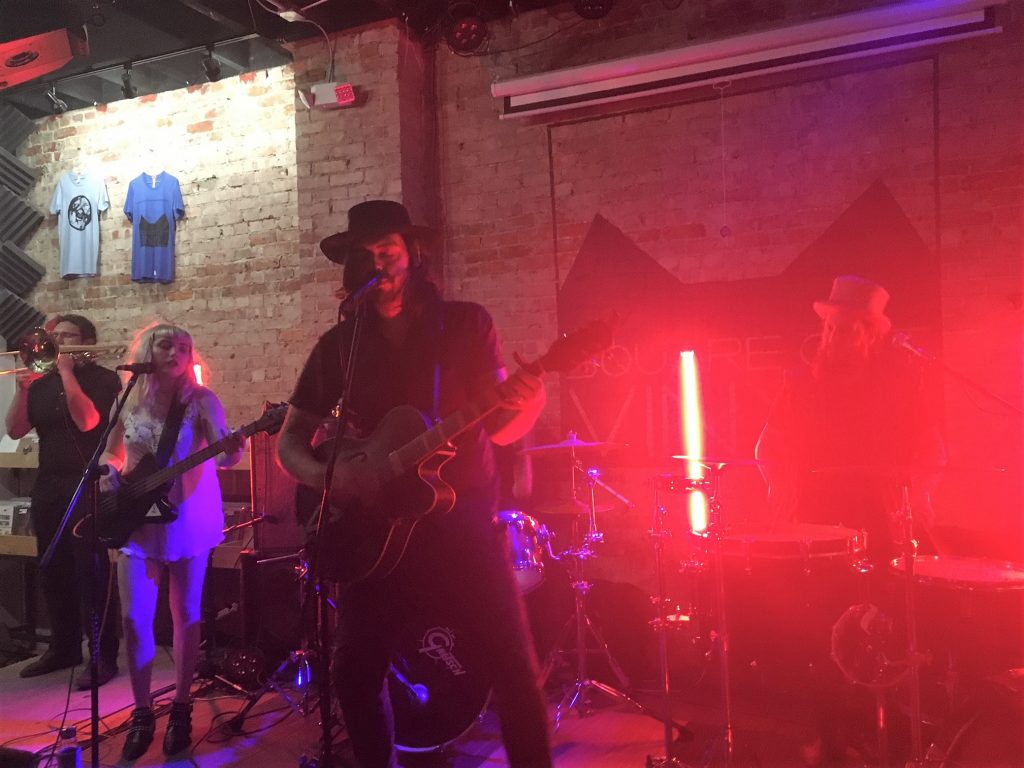 At 10:00 pm, Marah in the Mainsail took to the small stage set up in Square Cat Vinyl. By this time, the small record store was pretty packed, at least, as packed as its space allows.

While the opening acts of Megan Hopkins and SlideCat were softer and more intimate, Marah in the Mainsail sat on the opposite side of the spectrum.

They were loud, in your face, and unapologetic. It was actually quite the refreshing change of pace.

To get a good idea of Marah in the Mainsail, you kind of need to see them perform live, but I’ll do my best to get the picture across. They’re a five-piece band, consisting of one bassist, one guitarist, two percussionists, and one trombonist. Their sound was an interesting blend of surf-rock meets blues meets ska. And they definitely had a flair for the dramatic, especially the auxiliary percussionist, who wore a top hat and black eyeliner.

It was a shame that they played too loud to make out any of the lyrics, so it’s somewhat hard to say what the main themes of their songs were. This didn’t seem to matter to the crowd, however, who lapped up the high-energy tunes being blasted out to them. The small record store was filled with tapping toes, nodding heads, and bodies moving to the rhythm of the beat. It was clear that this was a band who liked to have fun, and they were pretty darn fun to listen to as well.

As the show went on, however, I was a little disappointed by the lack of creativity in songwriting. Don’t get me wrong, Marah in the Mainsail knows what they’re doing. They’ve definitely nailed their sound. But as I listened, I couldn’t help but wonder if they were willing to explore and experiment with it, or if they just found what worked, and didn’t want to change anything.

They were still a blast to listen to, but after hearing three or four songs, I could pretty accurately predict how their fifth would sound. That doesn’t have to be a downside, mind you. That just comes down to personal preference. I like to be surprised. Still, check them out, and you won’t be disappointed.

Ahmad Jamal gives “Sometimes I Feel Like a Motherless Child” the...