Last Saturday night, The Hi-Fi in Fountain Square held another of their New Faces Night. This periodical event is an opportunity for The Hi-Fi to showcase up and coming bands and musicians in Indianapolis. It’s a great way for new bands to get themselves out there, as well as an equally great way for music lovers to find new, favorite bands.

But first, a minor complaint.

While I think that New Faces Night is a good idea for any venue, so is punctuality, which the event unfortunately lacked. The doors were scheduled to open at 7:00 pm, which they did. I arrived at 7:45, assuming the music would start by 8:00, but also unsure since a start time wasn’t posted on the event page.

8:00 came and went, and the stage was still empty. There were maybe a dozen people gathered, sitting at tables, sipping beer and swapping stories while they waited patiently. I wasn’t bothered until another fifteen minutes had passed with no change. By the time Eric Pedigo finally took the stage, it was nearly an hour and a half after the doors had opened. Not a terrible crime, by any means, but irksome nonetheless.

Now that I’ve gotten that out of my system, we can get to the meaty stuff. Apologies for the digression. 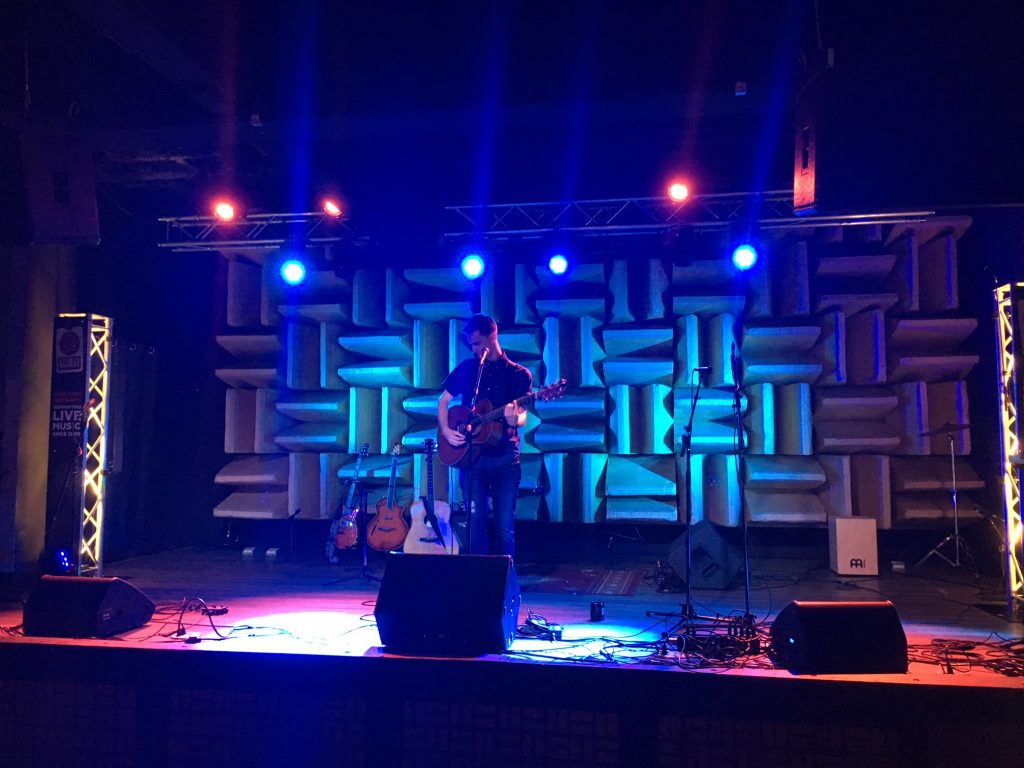 The first new face to show his face at the Hi-Fi’s New Faces Night was solo musician Eric Pedigo, a tall man who played alone on the stage with only an acoustic guitar and his voice.

While Pedigo wasn’t a virtuoso on the guitar, he demonstrated an impressive amount of range and control over his voice. His guitar playing utilized simple accompanying melodies in a percussive, finger picking style.

Throughout his performance, Eric Pedigo’s songs with an upbeat, almost poppy quality to them. The themes varied from heartbreak, dysfunctional families, and new beginnings. After finishing one song, Pedigo addressed the crowd, encouraging them all to have another round. “The more you drink, the better I sound, you know? It takes some of the pressure off me.”

The next song’s themes centered around dysfunctional families, and alcoholism. i don’t know if Pedigo realized he was sending a mixed message.

While Eric Pedigo’s skill and talent was undeniable, I couldn’t help but think that his songs would sound better with more accompaniment. A simple drum kit would work wonders. But the crowd seemed to like it, so who am I to say? 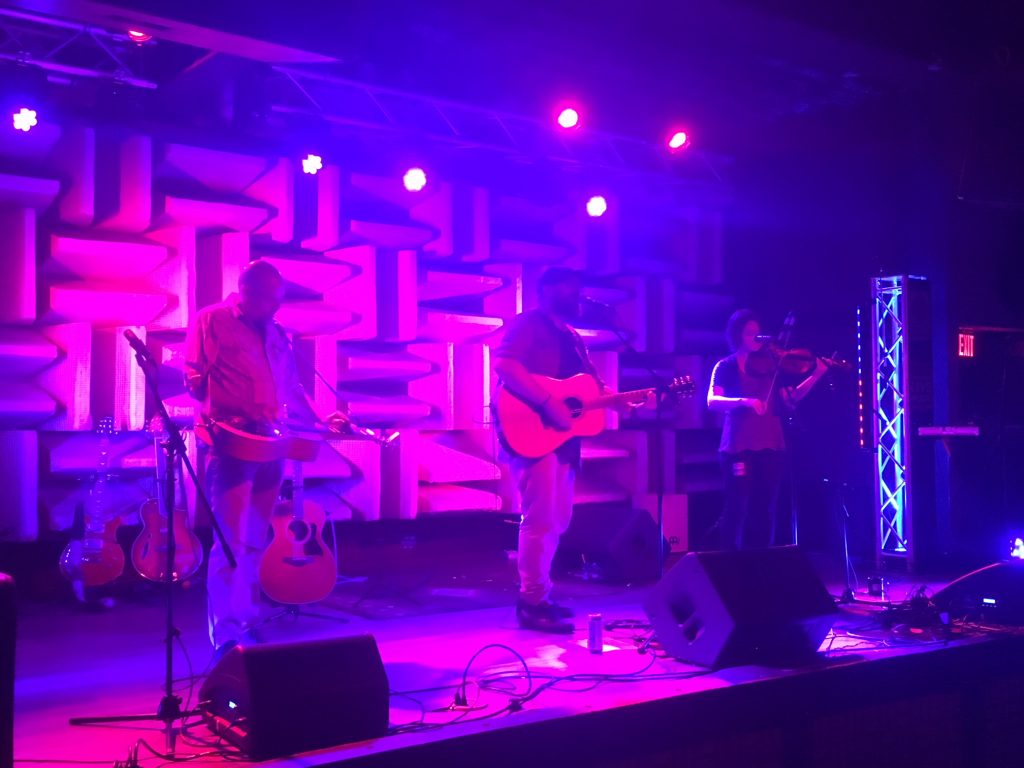 After Pedigo left the stage, Chris Wilson and The Heresy soon took his place. This three piece group had one similarity with Pedigo in that they had no drummer. Fortunately, they made up for this with an accompanying slide guitar and fiddle. But while the Heresy makes for a good supporting cast, it’s Wilson who makes them work.

Chris Wilson’s voice couldn’t be more different from Pedigo’s. Where Pedigo demonstrated incredible range and control, Wilson sat comfortably in his own range. His voice was simultaneously smooth and rough, and walked the line between a soulful softness and a more gritty sadness. His songs echo his voice in a way, mirroring it with a descent and then return to hope, but they still sit solidly in a kind of melancholic atmosphere.

In between songs, Wilson commented on the apparent lack of Dave Matthews fans, as the well-known band was playing the same night. This got some chuckles. Later in the show, Wilson called back to this by starting to play “Crash Into Me”, then laughed it off. Who ever said musicians can’t have a sense of humor? 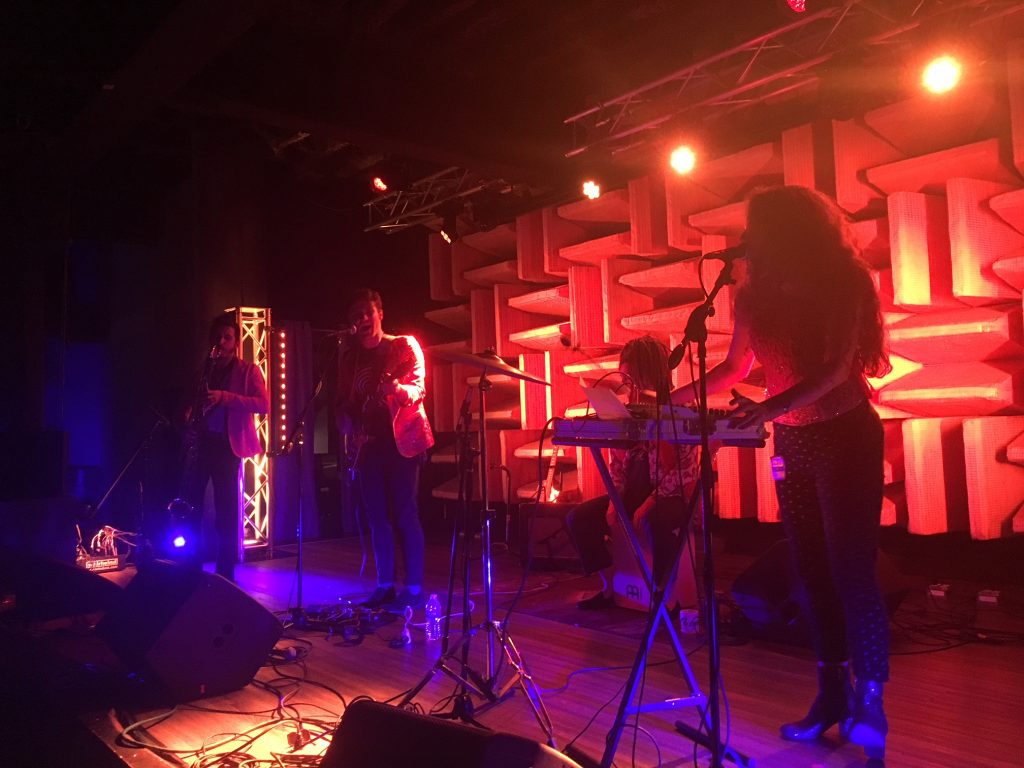 New Faces Night came to a head when Chris Dance and the Holy Echo started playing. They’re a unique, four-piece band consisting of a guitar, synth, baritone clarinet, and a cajon (little percussive box). The result is a Thom Yorke-ian, atmospheric, ethereal performance.

Chris Dance and the Holy Echo like to use reverb as an effect. Like, a lot. So much, that at times it was hard to tell whether you were hearing harmonizing vocals or droning synth chords.

But I don’t want it to sound like I didn’t enjoy the music. I did. Their songs all centered around simple yet effective grooves that made it easy to lock into the music. But by this time, the crowd had thinned out considerably. It didn’t seem like most of them wanted to listen to the soft-spoken, low-energy tunes, but I still enjoyed them.

All in all, I was pleasantly surprised by New Faces Night. The last time I went to a free show at The Hi-Fi, the music was sub-par, to say the least. This time, the new faces I saw, and new songs I heard were better than anything I could have expected. Keep your eyes peeled, and don’t miss the next one.