Slightly strange, yet highly effective Austin Butts is better known online as “Asspizza.” He once spent a few days in a New York Police Department holding cell for running an illegal Pokemon Trading Cards Empire. He once lived in the backroom of a Curves Gym in Queens, New York. As a youngster, he would assemble funds by stealing “My Little Ponies” from Toys R’ Us and flipping them at a much higher price to eBay customers. He is reluctant, creative, expressive and self-aware. There are few individuals like him, and many that are able to resonate with his weirdness. Certainly, he does not represent any one demographic but as a millennial, his journey proves that with the right formulaic approach, will-power and differentiation, anything is attainable.

As a California inhabitant, it is clear that Asspizza’s nontraditionality and nonchalance are two major selling points for his brand endeavors. People really began to start gravitating toward his artistic apparel in 2016. While Yeezy Season Three took place in Madison Square Garden, Kanye West held a listening party for seventh studio album, “The Life of Pablo” and released subsequent merchandise to coincide with the musical collection. What Butts and his cohorts like Jonah Levine attempted to do was make “bootleg” editions of West’s merchandise. They screen printed their own versions of YZY SZN 3 garments and sold it to over three thousand people waiting in line for the official Yeezy merchandise at a much lower cost.

Due to its handmade nature, Butts claims his versions to be much more authentic and exclusive. He acknowledges the knockoff essence of his product, but since it was made “by the kids, for the kids” and in small quantities, it serves as a testament to its exclusivity. Regardless, West and his collaborators such as Virgil Abloh and Heron Preston liked the Asspizza versions so much that they did an exchange between the fake and real versions and sold some of Asspizza’s bootleg versions at the in-store event.

Since that spectacular occurrence, many fashion-oriented individuals began to take notice of Butts’ overarching themes and movement in general. As a kid that began with scribbles and random doodles, his ascension into the spotlight of influencers continues to take place at a rapid pace. What really sets this young man apart from his peers is that he simply does not pay any mind to judgments and operates according to his own personal agenda and timetable. An instrumental piece of his nature depends upon complete self-identification, taking risky, yet wise chances, putting himself out there and not overthinking the entire process. His incredibly devoted work ethic coupled with a few viral moments (such as when Playboi Carti, Ian Connor, Kerwin fight at his house) have propelled him to become am extremely well-known and coveted designer in the social media age. He doesn’t care about outside perception and embraces his inner peculiarities. He lets it all hang loose, makes a fool of himself and embraces the imperfections of life’s arduous journey to yield strange and successful fragments of clothing that people want to wear.

Originally, he put his brand on the map by claiming to have worked with renown fashion designer, Marcel Zago. In reality, Zago existed solely as the creation of Asspizza and his associates. This sophisticated fashion persona, Marcel Zago, was created to produce an illusion of experience. With the right maneuvers and facades, Austin managed to create quite a stir.

His first Asspizza clothing collection became available online last summer and symbolized the reality of his work. With phrases like “Stop Pretending” the seasonal offering came complete with polos, jeans, long-sleeved pullovers and an off-kilter combination of clothing pieces sewn together into a patchwork bag. The patchwork bag of clothing was comprised of recycled and reusable materials. The well-developed series of apparel went by the name of, “ASSPIZZA 2017 Collection 1 Stop Pretending FGNF 730.” 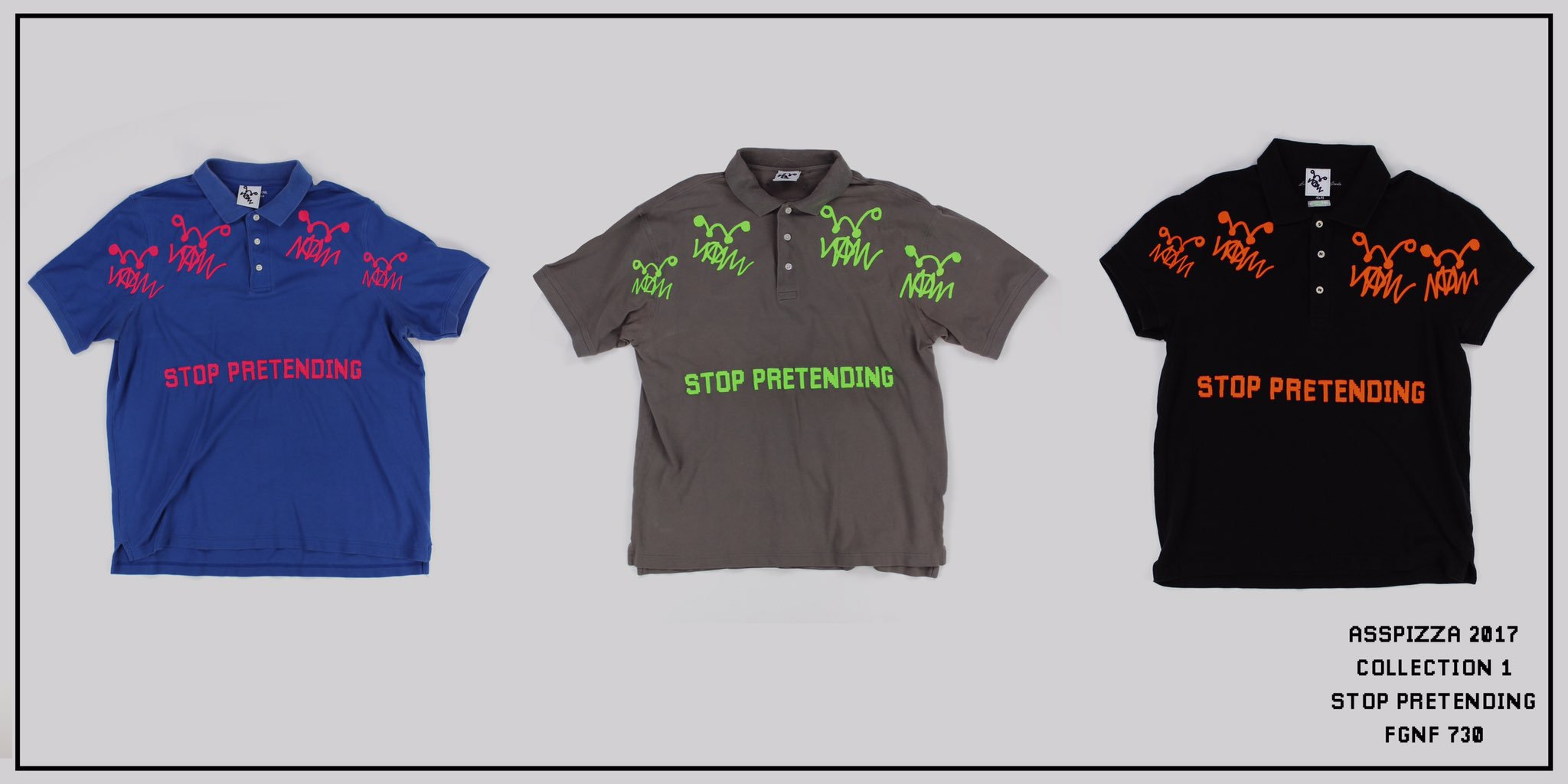 Some figurative themes and likenesses adopted from Asspizza have to do with the coldness and cruelty affiliated with modern society. Butts employs symbols such as aliens and even hand sketches his own alien type likenesses which became the central logo for his personal brand. He is terrific at taking traditional items such as the Timberland boot and completely reworking it to become his own personal production. With extraordinary experimentation and the use of multiple mediums, Butts successfully dismantles tradition and reassembles it to fit the mold of his artistic vision.

Of late, he has drawn ire from critics due to his custom design and scrawling over expensive investment pieces such as Supreme. A large part of what makes his apparel so exclusive deals with the ability to tune out naysayers and maintain laser-focused tunnel vision toward his ultimate goal achievement. He even marked up New York’s footwear staple, the Timberland with cowbell branding complete with his name across the midsole and extraterrestrial logo for the shoelaces

Currently, his online participation has branched out to include bizarre YouTube house tours, painting, collection documentaries and community meet-ups. Due to a confiscated PayPal account and subsequent fallout, Asspizza refuses to sell any apparel online. Once again, his exclusive supply drives the demand to high levels. After he concluded his vendetta against Paypal, Asspizza revitalized his approach and decided to market merchandise via in person encounters. He embarked upon his “No Shipping Tour”  June 20 and touched down in the western states of California, Arizona, Texas, Oklahoma, New Mexico and Nevada. His newest clothing adopts the phrase, “Nothing Matters” and encompasses reworked Mountain Dew and Hardee’s logos along with themes of Halloween and the crazy scenery from New York City. With exclusive handmade garments, reworked and re-sewn denim, community support, a strong inner circle and a passionate following, Butts sets the tone for how to thrive in an age of dwindling attention spans, clout chasers and instant gratification.