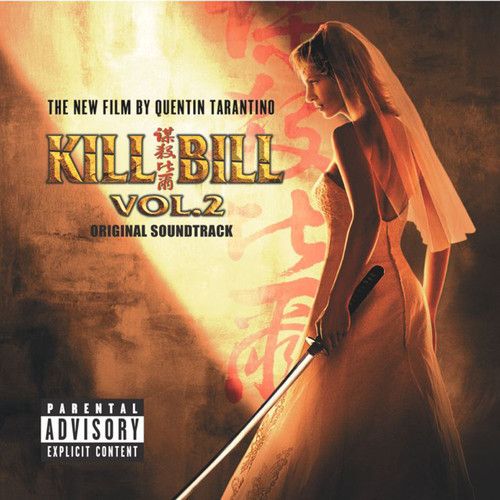 This week we’ll be giving our Exploring Soundtracks series a second installment. It seems appropriate to follow up with the sequel to Kill Bill in the same week. And to be perfectly honest, I have nothing better to do right now than to nerd out over another Tarantino soundtrack.

Kill Bill Vol. 2 concludes the story of the Bride’s (Uma Thurman’s) revenge on her former lover/boss, and the team of assassins who betrayed her. With no ear-catching tracks like Tomoyasu Hotei’s “Battle Without Honor Or Humanity”, or Santa Esmeralda’s “Don’t Let Me Be Misunderstood”, this soundtrack, as a result, pops a little less.

But it would be a mistake, I think, to try and capture the same kind of energy found in the first. This isn’t another episode of the same television series, after all. It’s a sequel, with a different tone, and the soundtrack supports that.

A Western at Heart

While the soundtrack itself doesn’t pop as much as the first, it’s still filled with a lot of great tracks. Three of those come from Ennio Morricone, who scored several Sergio Leone films, including The Good, The Bad, and The Ugly, Fistful of Dollars, and For a Few Dollars More. Morricone’s tracks help to bring out the western themes in this martial arts action film.

Although both Kill Bill Vol. 1 and 2 are categorized as martial arts films, there’s no denying that they’re both westerns at heart. It’s not just the fact that these three tracks exist on the soundtrack, but rather their precise placement in the film. Each of these comes at a character-revealing moment, showing us a closer look at the Bride’s story.

“Il Tramonto’s” soft and subtle melody rings slightly hopeful, but ominous during a flashback of the Bride’s dress rehearsal. She hears Bill’s flute from outside the chapel, and goes to investigate. As she walks to the doors, “Il Tramonto” plays, foreshadowing the death and destruction that will soon come.

The second Morricone track, “L’Arena”, sets the tone for the Bride’s escape from being buried in a coffin six feet underground. This is a powerful moment for the Bride, as we see how far she has to push herself to avoid certain death. The hopeful tune of “L’Arena” plays like a gunslinger’s walk away from a victorious shootout.

The final Morricone track, “A Silhouette Of Doom”, plucks ominous and foreboding notes that help set up the tension for the Bride’s final confrontation with Bill. The very climax of the film is set up with a western theme. If that doesn’t scream “western at heart”, I don’t know what does.

ِ A Collaboration of Composers

That heading might be just a tad misleading, but it sounds nice, doesn’t it? Got a nice ring to it.

While Wu-Tang Clan’s The RZA scored and organized the Kill Bill Vol. 1, Tarantino brought on fellow director and friend Robert Rodriguez for additional help in scoring Vol. 2. And for this, Rodriguez agreed to help on the score for only one dollar. Rodriguez’s deal might have a way for him to sneak in a song from his band, Chingon, whose song “Malaguena Salerosa” plays over the closing credits.

RZA said of the soundtrack:

The full soundtrack features standout songs from Charlie Feathers, Johnny Cash, and Malcolm McLaren. It also includes a bonus track from The Wu-Tang Clan at the end of the album.

You can pick up the Kill Bill Vol. 2 soundtrack at the Lemonwire Store. Click here and you’ll be directed to the Limited vinyl LP pressing.