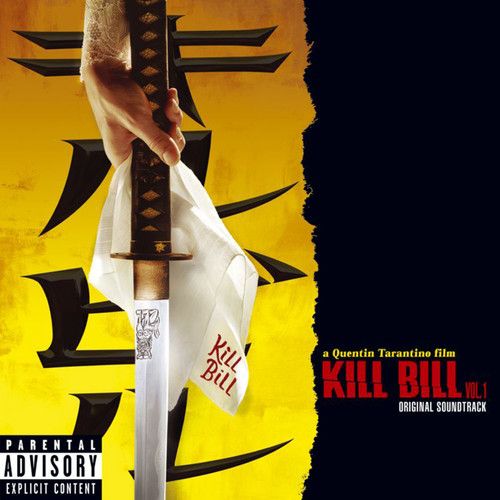 Sharpen your blade, slip into your favorite yellow jumpsuit, and set your mind on revenge. This week in Exploring Soundtracks, we’ll be continuing our dive into the films of Quentin Tarantino by looking at the soundtrack for Kill Bill Vol. 1.

The film stars Uma Thurman playing “The Bride”, who, after being betrayed by her former employer Bill (David Carradine), seeks revenge, but must first get through his team of elite assassins.

After looking at Reservoir Dogs, we know Tarantino has a unique ear for fixing music to his films. He’ll manage to capture the perfect tone one moment, and in another, he’ll veer off and bring something totally unexpected. Perhaps because he has such an ear for music, Tarantino decided to enlist Wu-Tang Clan’s the RZA to compose and organize the score. Their shared love of martial arts films brings yet another level of authenticity to this soundtrack.

While Kill Bill Vol. 1 is in many ways a true martial arts film, it also manages to capture the heart of the western through music. This is seen in the opening track that plays through the credits, “Bang Bang – My Baby Shot Me Down”, by Nancy Sinatra, as well as “The Grand Duel – Parte Prima” by Luis Bacalov.

The RZA weaves a myriad of different styles throughout the film, perfectly capturing the right tone in every scene. One in particular which always stands out to me, is the hospital scene featuring the one-eyed, Elle Driver (Daryl Hannah). Bernard Herrmann’s “Twisted Nerve” plays as we watch the California Mountain Snake stalk from room to room with a deadly syringe. The uplifting melody of “Twisted Nerve” turns dark right as the syringe is revealed, letting the audience in on the not-so-secret secret that our hero is in danger.

The soundtrack complements the intense action sequences and lulls in between with tracks that keep the story moving forward. Ali Hirt’s “Green Hornet” acts as the perfect backing to Uma Thurman’s Bride stalking an informant through the streets of Tokyo. Likewise, “Battle Without Honor Or Humanity” by Tomoyasu Hotei works as a terrific setup for the battle with the Crazy 88’s.

There’s always one particular sequence in a movie that sticks with you long after the credits have rolled. That one for me, in Kill Bill Vol. 1, is the long action sequence as the Bride takes on the Crazy 88’s. Even though most of the actual fighting is done in silence, it only makes the moments when the music chimes in that much more impactful.

During the actual battle with the Crazy 88, “Crane/White Lightning” by The RZA and Charles Bernstein first sets up the tension when the rest of the Crazy 88 burst in, then later heightens the sense of fear the Bride feels in the middle of the fight.

After the battle, Santa Esmeralda’s “Don’t Let Me Be Misunderstood” serves as a great high-energy track that sets up the tension between the Bride and O-Ren Ishii (Lucy Liu). It lets us know that this is the real climax of the film, and does so with style. And of course, as soon as she lays eyes on O-Ren, Thurman’s character’s vision goes blood-red as Quincy Jones’ “Ironside -Excerpt” plays, a signature effect repeated multiple times in both Kill Bill Vol 1 and Vol 2.

Once she lays waste to O-Ren Ishii, “The Flower of Carnage” by Meiko Kaji is there to release the tension. Then, “The Lonely Shepherd” by Zamfir reminds us of the blend of western and eastern themes in the movie, and close out the credits.

The vinyl recording only includes the first fifteen tracks from the full soundtrack. The ones left out are excerpts, short tracks, or sound effects used in the film.

You can currently pick up the vinyl soundtrack for Kill Bill Vol. 1 at the Lemonwire store. Be sure to browse around, too. We’ve got a wealth of great soundtracks and other vinyls that all deserve a spot in any record collection.

Exploring Soundtracks: Into the Wild