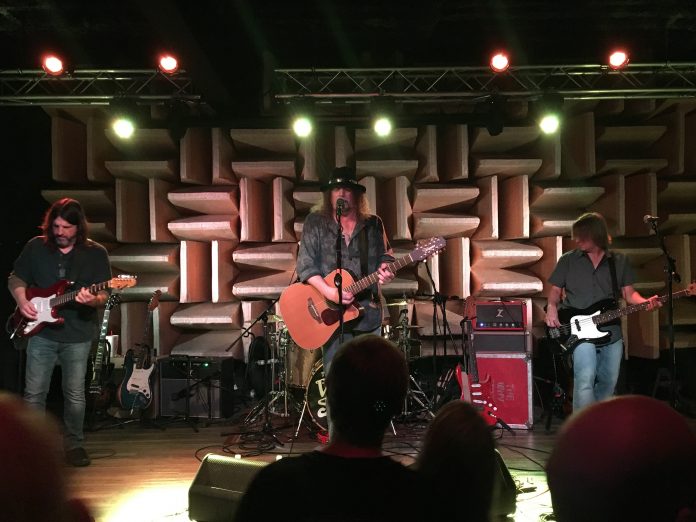 If you happened to read A Night of Music: Pt. 1, then you’ll know that last Saturday was quite the busy night for two young Lemonwire journalists. Covering three shows in one night was a tall order. But with youth comes the kind of can-do confidence that often ignores logic and reason, trading it for a naive optimism that can at times lead to disappointment.

Chef Squid and I experienced a touch of that disappointment toward the end of the night, but not before we hit our stride at The Hi-Fi.

We had just come back to Fountain Square from 31 Bar and Grill, where we’d seen Cosmic Situation play a great show at not so great of a location. We were both of us ready for a change of scenery, and the kind of excitement that can only be found in the livelier neighborhoods of Indianapolis.

As we walked into The Hi-Fi, Chris Shaffer and The Why Store were already in the middle of their second set. The place was packed. Mostly with what looked like middle-aged moms and dads, out for a night on the town. But there were some younger folks there, too. Regardless of the median age of the audience, the place was electric with the youthful energy radiated by The Why Store.

Chris Shaffer and The Why Store

A good deal of the energy from The Why Store can be attributed to lead singer, frontman, and guitarist Chris Shaffer. Shaffer stood at the mic wearing a cowboy hat over the brown curls that fell to his shoulder. He was the very image of a modern rock cowboy. As he sang, he rarely did so without a big, cheesy grin plastered on his face. It was clear he was having a great time, and the feeling was infectious.

The high point of The Why Store’s performance had to be when they launched into their most popular single, “Lack of Water”. During the song, people were dancing, singing back lines fed to them by Shaffer, and clapping their hands to the beat. After the second set was over, The Why Store disappeared abruptly backstage. It didn’t take long, however, for them to come back out to appease the cries and cheers for an encore.

After the encore, it took a while before the fans filtered out of The Hi-Fi. Several of them approached Shaffer as he was loading up his gear. They shook hands, told him how much they enjoyed his performance, and he in turn thanked them for coming. Shaffer’s natural charisma wasn’t an act, and seemed to follow him even when the spotlight was turned away.

It wasn’t long after The Hi-Fi emptied that Squid and I were called backstage. Stay tuned for the full video interview we had with Chris Shaffer and The Why Store.

After we’d finished a successful interview with Chris Shaffer and The Why Store, I’ll admit that the night was wearing on me. The earlier enthusiasm and optimism I’d had earlier had mostly deflated once we’d covered two out of our three concerts. Still, we’d made an agreement, and I wanted to see this thing through to the end.

The Melody Inn wasn’t packed by the time we rolled up to it. It was just past midnight, and it seemed like most of the crowd that’d shown up had already left for the night. At first I was worried that we’d missed all the bands, which shouldn’t have happened. We’d spoken to the owner earlier, who said that they’d still have bands playing until the bar closed. Sure enough, when we walked through the doors, there was the last band, setting up their gear on the main stage. However, their name, The Godawfuls, proved to be more accurate than ironic.

When The Godawfuls launched into their first song, my ears were assaulted with heavily distorted noise, crashing cymbals, and a rough and unmelodic guttural roar from the lead singer. I could barely distinguish the chord changes, and there was no melody to follow.

My heart dropped. This is what we’d come here to see? I know that punk is by nature rough, but this was barely music. At least by my own standards. And I know, everyone has the right to their own opinion. I’m not saying that The Godawfuls didn’t have their own audience who appreciates their style. I just knew that I wasn’t one of them.

A Night of Music Come To A Close

By the time The Godawfuls were playing their third song, I was checked out. Maybe it was the long night I’d already had, or maybe it was comparing this band to the much better ones I’d seen earlier. Whatever it was, I knew I didn’t have it in me to sit through an hour of this, or even one more song. When I glanced over at Squid, I saw he was trying to hide a grimace as well.

We called it a night then, and left without waiting around for an interview. Two out of three was still a successful night. And you couldn’t pay me enough to pretend to be impressed with a band like The Godawfuls.

Even though the night ended in disappointment, we’d still seen some great bands play, and gotten the chance to speak with some incredibly talented artists. And the only thing I could think about while I drove home, was if we could manage to pull off the same thing next weekend.